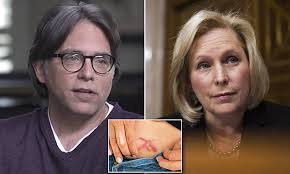 Sen. Kirsten Gillibrand must come clean about her family’s connection to an alleged sex-slave cult upstate whose leader was arrested by the FBI on Monday, her Republican rival said.

GOP senatorial candidate Chele Farley noted that Gillibrand’s father, Doug Rutnik, was once a lobbyist for NXIVM and its founder, Keith Raniere.

“For Kirsten Gillibrand, the self-proclaimed #MeToo Senator, to claim ignorance about a notorious sex-slave cult, in her own backyard, is simply hard to believe,” said Farley.

A Gillibrand spokesman Tuesday referred The Post to a statement to Post columnist Richard Johnson last November, claiming she knew nothing.