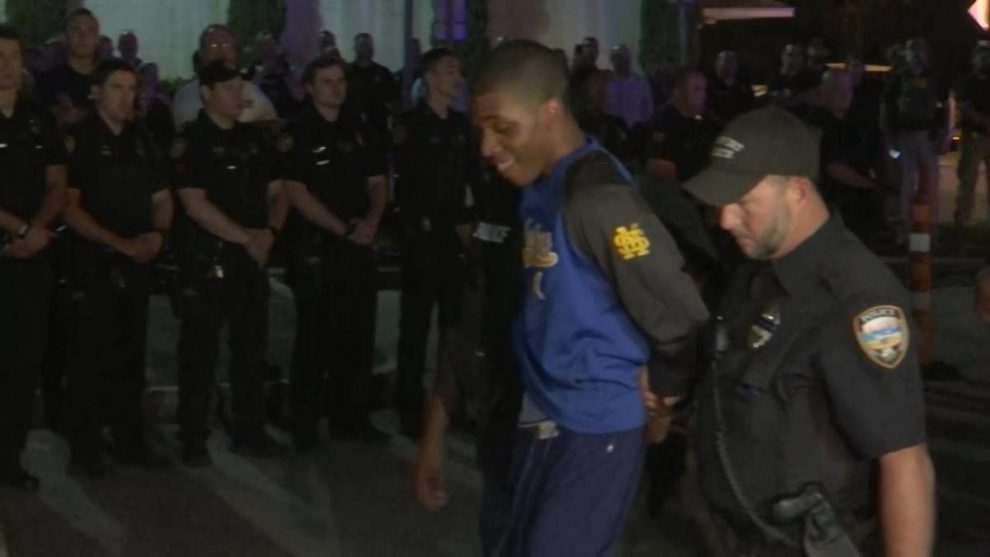 BILOXI, Miss — Biloxi Police have arrested the suspect in the shooting death of officer Robert McKeithen, who was shot to death in the police station parking lot Sunday night, officials announced Monday evening.

In front of a line of law enforcement officers and a large crowd of onlookers in that same parking lot, Darian T. Atkinson,19, was walked, smiling and in handcuffs, into the police station.

He was arrested in Wiggins, Mississippi Monday evening, less than 24 hours after McKeithen was shot, according to Biloxi Police Chief John Miller.

Atkinson faces capital murder. He will be transported to Harrison County Adult Detention Center after he is processed in the Biloxi Police Department, officials said at a press conference Monday evening.

Miller said the focus now is on building a strong case against him.

Police initially believed Atkinson, of Biloxi, was still in the city and was armed and dangerous following the killing.

Officials said they believe people were helping Atkinson evade police, but did not go so far as to use the term “harboring” in an afternoon press conference to update on the investigation. Monday night, Miller said one individual could face an accessory charge for helping the suspect, but did not go into detail.