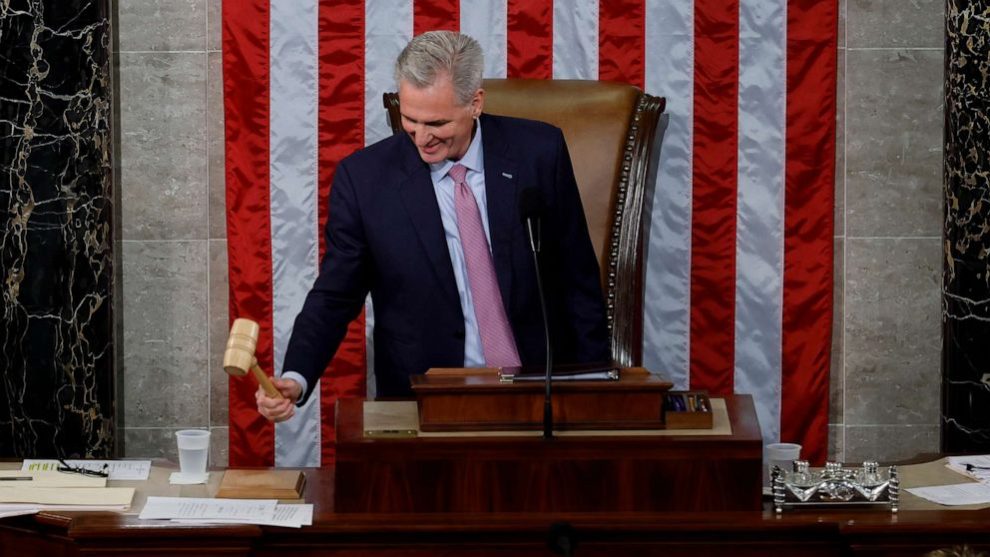 On the 15th ballot, which commenced just before midnight EST, California Rep. Kevin McCarthy was elected the 55th speaker of the U.S. House of Representatives. He will succeed Democrat Nancy Pelosi, also from the Golden State.

Earlier in the day, a number of the 20 holdouts who had refused to vote for him agreed to support McCarthy on the 12th ballot, but he was still several votes short. Later in the afternoon, Rep Andy Harris (R-Md.) added his name to the list of McCarthy supporters, bringing him within striking distance of the speaker’s gavel.

McCarthy reportedly agreed to major concessions, convincing the holdouts to support him. “I think we hammered out a historic agreement that’s going to change the way Washington does business,” Harris told Fox News’ Laura Ingraham.

A single member can move to “vacate the chair”
A hard line on the debt limit
Votes on term limits and border security
McCarthy’s leadership PAC will stay out of open primaries
“Open rules” on spending measures, and the ability to bring up stand-alone appropriation bills
Discretionary spending cap
A commitment to set up a committee on the “weaponization” of the government.

After a recess, the House reconvened for a 14th ballot. Rep. Lauren Boebert (R-Colo.), one of the most vocal holdouts, voted present, lowering the threshold for a McCarthy win. Republican Reps. Andy Biggs (Ariz.), Eli Crane (Ariz.), Bob Good (Va.), Andy Harris (Md.), and Matt Rosendale (Mont.) all refused to vote for McCarthy the 14th time around. Republican Ken Buck (Colo.), who was absent for the votes earlier in the day, added to McCarthy’s total. Matt Gaetz (R-Fla.), who did not respond when his name was first called, voted “present” on the second call. Still, McCarthy came up one vote short. The final tally was: McCarthy 216, Democrat Rep. Hakim Jeffries 212, Others 4, Present 2.

A motion was made to adjourn until Monday, and it appeared that it would succeed, but in a moment of high drama, Gaetz, after speaking with McCarthy on the floor, ran to the dais, apparently to vote nay on adjournment. That set off a flurry of vote switches, and the motion failed.

In the 15th round of voting, Boebert and Gaetz again voted present, as did holdouts Biggs, Crane, Rosendale, and Good, lowering the threshold for a McCarthy win, which he secured at 12:31 a.m. EST. The final vote tally was McCarthy 216, Jeffries, 212, Others 0, Present 6.

“Therefore,” the clerk announced, “the honorable Kevin McCarthy of the state of California, having received a majority of the votes cast, is duly elected speaker of the House of Representatives.” The chamber erupted in cheers and shouts of “USA! USA!”

Rep. Dan Bishop (N.C.), who switched to McCarthy in the end, said, “We’ve got an agreement” to change how the House operates… It’s a transformational agreement.”

As a result of the contentious battle between the always- and never-McCarthy factions, McCarthy will be on a much shorter leash than he had likely expected. It’s a huge victory for conservatives in the caucus, who will now have greater control over the Republican agenda and the rules in the House.

Just after 1 a.m. EST, Hakeem Jeffries, officially the first runner-up, invited McCarthy to the dais and presented him with the speaker’s gavel after giving a bitterly partisan speech. His rhetoric—suggesting Republicans are bigots and xenophobes—drew boos from the majority party. McCarthy glared at Jeffires.

“Our system is built on checks and balances. It’s time for us to be a check and provide some balance to the president’s policies,” he declared.

McCarthy’s first order of business was to declare that the House will once again be open to the public. “I want to give all Americans a personal invitation. You are welcome to see this body at work. No longer will the doors be closed, but the debates will be open for you to witness what happens in the People’s House.”

The new speaker thanked his family: “I am where I am because you are who you are.”

“I hope one thing is clear after this week,” he said. “I never give up.”

“Therefore, with love for this country and charity for each other, let us now take our oath and be worthy of the office on which we are about to enter,” McCarthy concluded. “God bless everybody in this chamber, and God bless America.”

The new speaker then took the oath of office and swore in the 118 Congress en masse.