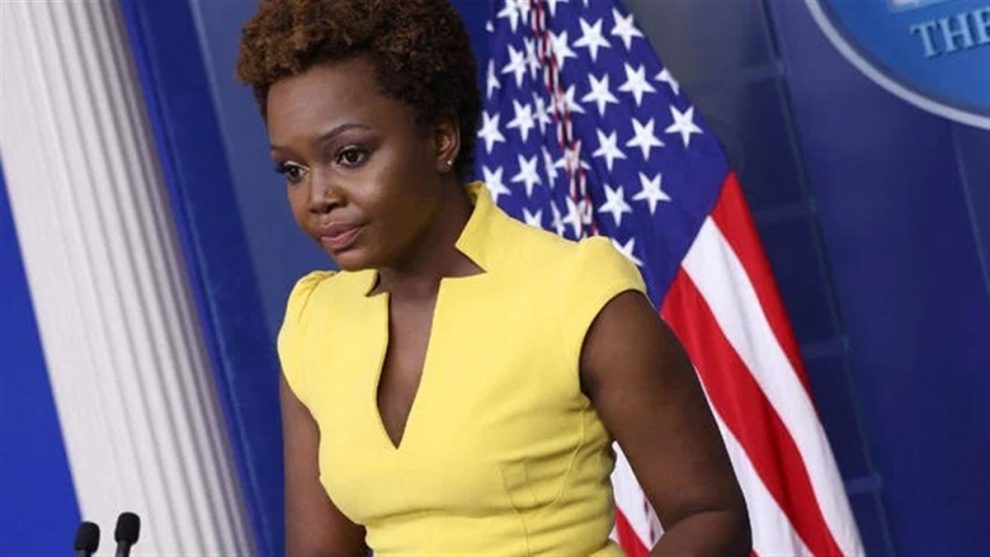 Another day, another disaster for White House Press Secretary Karine Jean-Pierre. Eventually, she is going to burn out on the continual slapstick comedy bits that the press briefings have become. She can only wipe the pie off of her face so many times before she hands in her two weeks’ notice. Then she’ll take a gig with CNN where nobody will ask her anything and she can become the star she was destined to be.

That will be a sad day, since waiting for the story of the latest flub or blooper has become a bit of a tradition. A fun, if cringe, Advent calendar, if you will. And while these moments in which the White House yet again becomes a whoopie cushion are somewhat entertaining, one stares at them with the same mixture of horror, curiosity, and fascination as one does a crash scene.

The Daily Caller reports that the latest episode of the wheels coming off a White House presser took place on Thursday. Simon Ateba is a reporter for Today News Africa. He had a question for Jean-Pierre about the U.S.-Africa Summit, in which President Biden will host leaders from 50 African nations. A perfectly reasonable expectation for a reporter from an African news agency at a White House presser. In fact, I can’t think of a better venue.

Not only did Jean-Pierre not answer the man’s question, but she also would not explain why she could not answer the question. She became so frustrated that she called an early lid and left the room. You can watch the exchange below:

Ateba talked with the Daily Caller afterward: “Karine Jean-Pierre should be ashamed of herself. How bad can discrimination get? Even when President Biden is hosting 50 African leaders, she cannot give a question to the African reporter in the room. Shameful.”

Ateba has been a thorn in the sides of both Jean-Pierre and her predecessor, Jen Psaki. He has been critical of both secretaries for only calling on a small number of reporters. He took issue with Jean-Pierre for refusing to call on a Daily Caller reporter during Anthony Fauci’s last briefing on November 22. Ateba noted that the reporter had a valid question for Fauci and that she should have been called on. Jean-Pierre said, “I hear the question, but we’re not doing this the way you want it. This is disrespectful. Simon, I’m done. I’m done with you right now. You’re taking time away from your colleagues.”

He has also been threatened with expulsion by the White House Correspondents’ Association. That stemmed from an incident in which Ateba raised the issue that Psaki was not taking his questions during her final presser in May. He is disgusted that the concept of freedom of the press apparently has no meaning in the White House briefing room.

It might be that Jean-Pierre knows that she is in over her head and that the problems of this administration cannot be spun. It might be she is simply exhausted from dealing with one blunder after another.

But, given Jean-Pierre’s age demographic and political leaning, it is probably far more likely that she believes that she is somehow entitled to the post. She probably believes that every reporter and news outlet is naturally supposed to bow their knees like CNN and give her all the deference and breaks that she wants. She probably did not think the job would be this hard and is angry that certain members of the press are not making it easier for her to shine. In reality, she has shown that she is simply not organized or, for that matter, mature enough for the job.

Welcome to America, Mr. Ateba. I’m sorry we couldn’t do any better for you. You may want to try again after 2024.