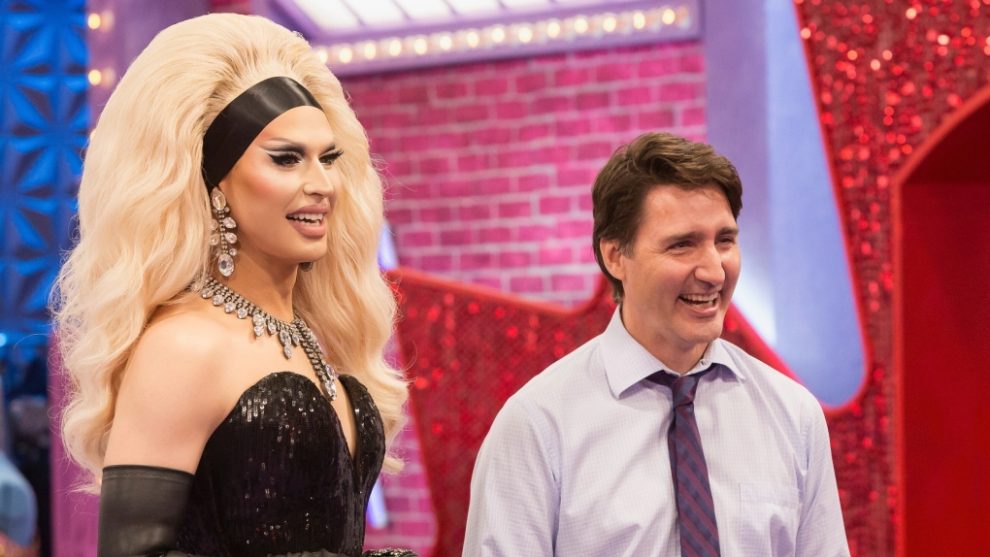 Prime Minister Justin Trudeau was invited to appear on the Canadian spin-off of RuPaul’s Drag Race, where he preached about diversity.

Trudeau told the drag queens it had been “an incredible pleasure to be part of fighting the good fight on the right side” after the show’s host congratulated him for becoming the first Canadian leader to participate in a Pride parade and being “such an ally” in a clip of his appearance shared on social media.

“Can we move beyond ‘tolerate’ and start embracing, and loving, and accepting, and learning from, and being challenged by, that’s how you build a resilient society, that’s what we’re trying to do in Canada, and we’ve got a lot of work still to do, ” the 50-year-old rambled incoherently, while wildly gesticulating with his hands.

Asked about his attitude to increasing racial diversity in “the Great White North”, the Liberal Party leader said that “we do diversity better than just about any other place in the world; it doesn’t matter what you’re background is, where you’re from, who you love, you enrich this place.”

"It doesn't matter what your background is, where you're from, who you love – you enrich this place" ❤️ Thank you Prime Minister @JustinTrudeau for visiting the #CanadasDragRace werkroom

“I have full-body goosebumps,” said one cast member after Trudeau left the set — to sexually-charged cries of “hate to see you leave, love to watch you walk away, baby!” — as if they had encountered a saintly religious figure.

“I love him so much because people like him made it easy for immigrants to migrate here and have a chance for a better life, so like, seeing him, being here, it’s actually, like, such, like, it’s so nice,” added another cast member, tearfully.

Trudeau infamously declared in 2015 that Canada, a former European colony with a rich Franco-British history, reflected in such things as its retention of the British monarch as head of state and many Scottish-derived customs and traditions, is now a place where there is “no core identity, no mainstream… Those qualities are what make us the first post-national state.”

Trudeau Govt To Increase Migration Levels To 500,000 Per Yearhttps://t.co/yEAgVhffSo