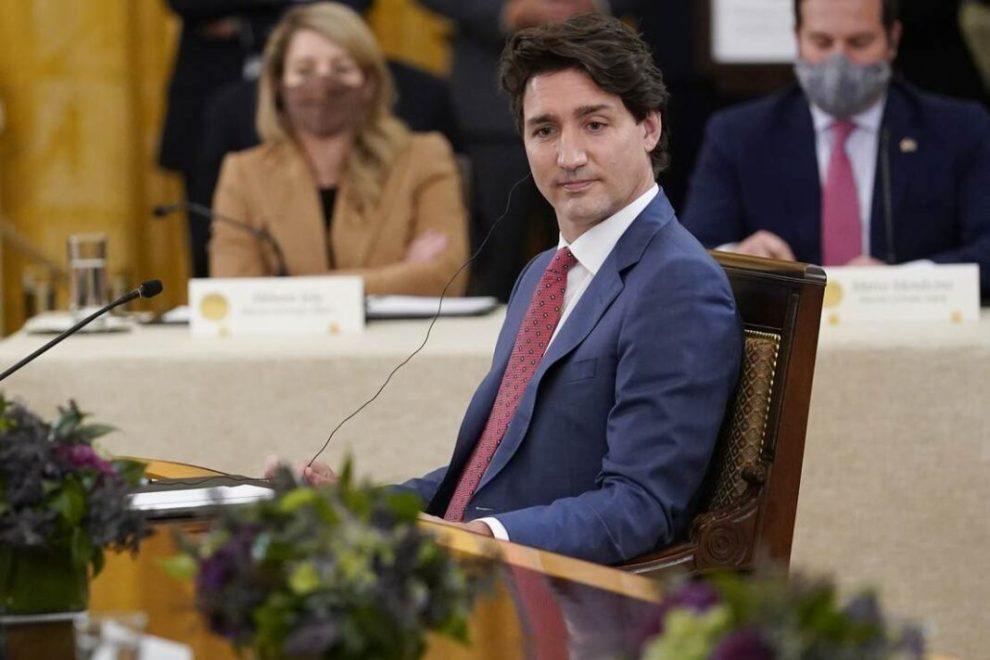 The lack of self-awareness among the global elites is stunning. After Canadian Prime Minister Trudeau cracked down on protestors in his own country and sent his henchwoman, Finance Minister Chrystia Freeland, to freeze the assets of protesting truck drivers and their supporters, he traveled to Brussels to speak to the European Parliament. His theme was the threats to democracy posed by Russia’s invasion of Ukraine and the growing distrust of governments in the West in the face of economic uncertainty.

Prime Minister Justin Trudeau is making a plea to European leaders to come together as democracies in the face of Russia’s unprovoked invasion of Ukraine and tackle rising uncertainties citizens have about the future.

Trudeau said economic frustrations are threatening the stability of the world and driving a deep uncertainty about the future and distrust of government.

He also said democracies face a new threat from Russian President Valdimir Putin and his attack on Ukraine, which Trudeau called a violation of international law with the targeting and killing of civilians in hospitals and residential buildings.

Trudeau said the war in Ukraine poses a security threat not only to Europe, but to western democracies and the world.

“Putin’s attack on Ukraine is an attack on the values that form the pillars of all democracies. We have a responsibility to make the case to people about why these values matter so much — not just to Ukrainians but to us all,” Trudeau said in his remarks.

You can almost hear him speaking earnestly in his near-whisper, can’t you? Luckily, a few EU parliamentarians offered him more than a mirror. During his allotted time to speak at the meeting, Mislav Kolakusic, a Croatian member of the European Parliament (MEP), criticized the Canadian government’s hardline approach to protests by truck drivers in Ottawa.

After Trudeau waxed poetic about democracy, Kolakusic held nothing back: “Freedom, the right to choose, the right to life, the right to health, the right to work for many of us are fundamental human rights for which millions of citizens of Europe and the world have laid down their lives to defend our rights and the rights of our children which we have acquired over the centuries.”

He continued, “Many of us, including myself, are willing to risk our own freedom and our own lives. Unfortunately, today, there are those among us who trample on these fundamental values.”

Croatians are all too familiar with authoritarian rule in the modern age.

Speaking directly to Trudeau, he added, “Canada, once a symbol of the modern world, has become a symbol of civil rights violations under your quasi-liberal boot in recent months. We watched how you trample women with horses, how you block the bank accounts of single parents so that they can’t even pay their children’s education and medicine, that they can’t pay utilities, mortgages for their homes.”

Romanian MEP Cristian Terhes issued a statement announcing his decision not to attend Trudeau’s speech. It was just as brutal as Kolakusic’s comments: “You can’t come and teach democracy lessons to Putin from the European Parliament when you trample with horse hooves your own citizens who are demanding that their fundamental rights be respected.”

In another paragraph, he asserted that Trudeau is no better than Putin. “When you, a politician from the ‘west,’ implement in your home methods of repression and the trampling of the rights of your own citizens, who demand their rights be respected, as Putin does at home, you are no better than him.”

Terhes went on to criticize Western leaders more generally. “These imposter leaders of today’s west have brought the world into the chaos we find ourselves in today, precisely because they have strayed from the values that made the ‘west’ a free and prosperous world.” He added, “The departure of western leaders from these values (individual liberty, respect for rights and freedoms, etc.) not only made them lose their moral ascendancy but allowed the rise of tyrants like Putin.”

Then Terhes articulated something Americans are noticing about the current global skirmish: “Between the Russian imperialist tyranny, promoted by Putin, and the neo-Marxist tyranny pretending to be progressivism promoted by the likes of Trudeau, in which people are deprived of their rights and freedoms, becoming objects of the state, I do not choose any.”

Of course, if you suggest that something seems off with the conflict, you will be called a Putin stooge. Just ask Tucker Carlson or Tulsi Gabbard.

Terhes was just as plain-spoken during the crackdown in Ottawa. “He’s exactly like a tyrant, a dictator. He’s like Ceaușescu in Romania,” he said. “If even you doubt, if you raise doubts about the [COVID] vaccines, you’re outcasted.”

Romanian MEP @CristianTerhes absolutely mops the floor with PM @JustinTrudeau in Brussels this week over how he's handling the Ottawa #FreedomConvoy2022 protests.

Hopefully, Trudeau returned home demoralized. Maybe he will send Freeland after his detractors in Brussels. It is probably too much to expect that President Biden will receive similar truth bombs from members of the EU Parliament during his attendance at a meeting of NATO. However, with the two-tiered justice system that is obvious to anyone to the right of Hilary Clinton, the blatant corruption of the Biden family detailed on Hunter Biden’s laptop, and a corporate media and oligarchy intent on burying stories critical of our regime, how far are we from a Western oligarchy similar to the one Putin oversees?