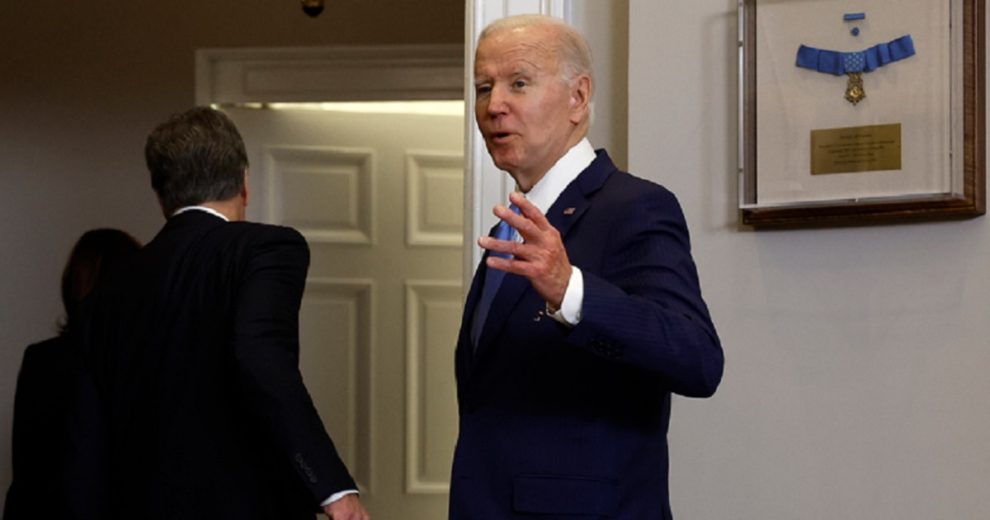 If nothing else, the prisoner swap announced Thursday between the United States and Russia that brought home an American sports star from Russian prison proved two things:

The first is that nothing will trump leftist priorities when it comes to any move by the Biden White House.

The second is that, even if talk is cheap, nobody’s words are worth less than President Joe Biden’s.

The real news of the prisoner swap wasn’t so much that the U.S. had received WNBA star and former Olympian Brittney Griner in exchange for the Russian arms dealer Viktor Bout, a man whose “Merchant of Death” nickname pretty much says it all.

The real news was that, as The Associated Press reported, the deal did not include American Paul Whelan, an executive who’s been behind bars accused of espionage in Vladimir Putin’s Russia since 2018.

According to NBC News, the Biden administration had sought to have both Griner and Whelan released in exchange for Bout, but Putin offered only one or the other — or neither.

No American president should ever stand for being blackmailed like that by any foreign leader. And even for Biden to accept the choice on behalf of his country was a humiliating display of moral and political cowardice. (Even the most vicious critics of former President Donald Trump know Trump would never have bent his knee like that.)

But Putin knew the president he was dealing with and was betting, correctly, that Biden would cave — just like then-President Barack Obama caved to the Taliban when he freed five terrorist leaders in 2014 in exchange for one Army deserter.

And there was never a doubt on either side which prisoner Biden would pick.

Griner, of course, is an international celebrity by now. A black lesbian sports star who was jailed on what sounds to any reasonable person like a bogus charge — and certainly not one that deserved a nine-year prison sentence.

Whelan is a white middle-aged businessman imprisoned on an espionage charge — a profile that pushes literally none of the buttons for the Democratic base that Biden depends on. Given those alternatives, Biden’s evident decision to pander to the impulses of the left was embarrassingly predictable.

What’s even worse, though, is what Biden was doing the night before the world learned that he had bought the freedom of a woman who is a cause célèbre on the left by freeing a man who made a living dealing deadly munitions.

He was attending a vigil for “all victims of gun violence” at a church in Washington, D.C.

I'm joining survivors and families impacted by gun violence to deliver remarks at the 10th Annual National Vigil for All Victims of Gun Violence. https://t.co/hBLwgwFOpo

The victims of that kind of violence need to understand that the president has a political base to satisfy, and if that means trading a notorious arms dealer to win the freedom of a black lesbian sports star who didn’t want the national anthem played before WNBA games, then politics beats principle, every time.

Moments ago I spoke to Brittney Griner.

Now, no sane American is happy to see a compatriot imprisoned on foreign soil — and the State Department in May declared it an official position of the United States that Griner was “wrongfully detained,” according to an ESPN report, ramping up efforts to get her out.

(The same ESPN report noted that Whelan is also classified by the U.S. government as “wrongfully detained,” but there’s that whole middle-aged, non-lesbian, white man thing to take into account. Some wrongful detainees are clearly more equal than others.)

But even for the Biden administration, the hypocrisy of moves that bookended 12 hours is astounding.

The same president whose administration was working to free an arms dealer — one so prolific he is known as the “Merchant of Death” — was on a stage Wednesday evening, commiserating with the relatives of the victims of gun violence.

And, being Biden, he was bragging about his own efforts to strip America of a fundamental right guaranteed by their Constitution:

“Together, we’ve made some important progress: the most significant gun law passed in 30 years, but still not enough,” Biden said, according to a White House transcript.

“Even as our work continues to limit the number of bullets that can be in a cartridge, the type of weapon that can be purchased and sold, the attempt to ban assault weapons — a whole range of things that are just common sense. Just simple common sense.”

But the Founders had exactly the opposite approach. The Constitution — particularly the Bill of Rights — was designed to protect individual rights against government encroachment.

That was the Constitution Biden swore to “preserve, protect and defend” on the day he was inaugurated.

Biden clearly has no problem freeing a Russian who’s made a career of dealing in arms far more deadly than the “assault weapons” Biden and his fellow Democrats want to deny American citizens.

He clearly has no problem standing in front of his own country, as he did Wednesday, to double down on his determination to attack the rights guaranteed by the Second Amendment, despite his sworn oath.

But to prove both within the space of half a day makes the reality appallingly clear.

All talk is cheap. But Joe Biden’s word is worthless.