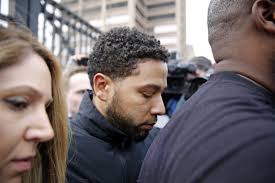 Out on $100,000 bail and back on the Empire set for a stint, Jussie Smollett on Thursday insisted he is innocent of conniving a racist and homophobic assault upon himself.

“Mr. Smollet is a young man of impeccable character and integrity who fiercely and solemnly maintains his innocence and feels betrayed by a system that apparently wants to skip due process and proceed directly to sentencing,” read a statement sent out late Thursday on behalf of the Empire actor.

“Today we witnessed an organized law enforcement spectacle that has no place in the American legal system,” the hyperbolic statement added. “The presumption of innocence, a bedrock in the search for justice, was trampled upon at the expense of Mr. Smollett and notably, on the eve of a Mayoral election,” it also noted, tossing more political edge into an already sharply political affair.

See also  Gavin Newsom Runs Ads in Florida Trying to Get Folks to Move to California for More Freedom
→ What are your thoughts? ←
Scroll down to leave a comment: