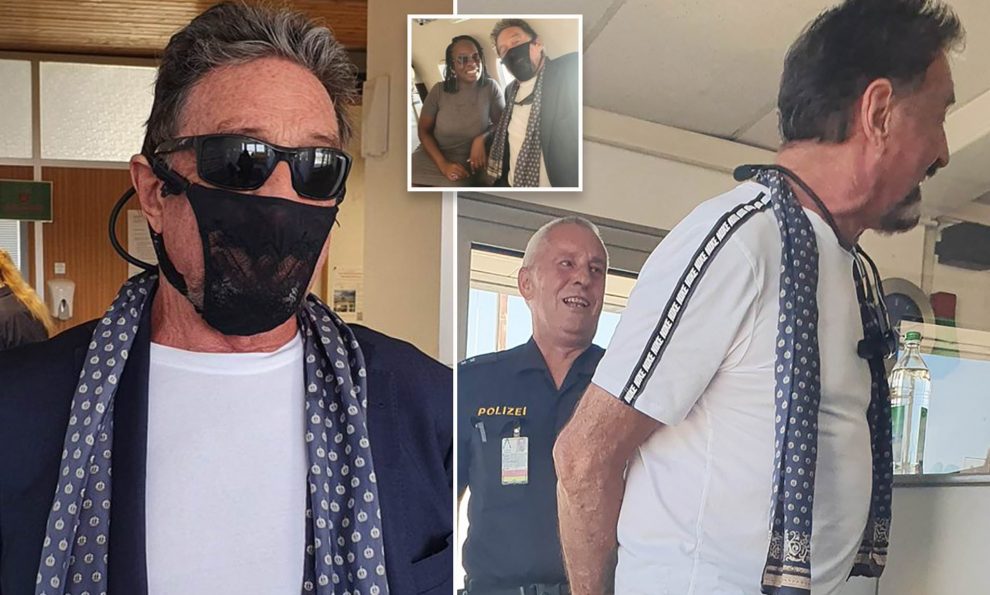 John McAfee knows a thing or two about viruses, but not the kind face masks are meant for — so he was apparently arrested in Norway for wearing a thong over his face instead of a proper cover, according to a report.

McAfee, 74, the eccentric, eponymous founder of the PC antivirus software giant, took to Twitter on Monday to announce that he had been detained because he refused to don a medically certified mask instead of — or over — the ladies underwear, the Daily Mail reported.

“My Coronavirus mask is the problem. I am insisting it is the safest available and I’m refusing to wear anything else — for my health’s sake. Authority!?!?!?!?” he said in another tweet.

“Going to have to cancel the Red Scarf Society meeting. I am so sorry. Note to future adventurers: Always joke with you captors. No matter what,” McAfee added, referring to his group.

His wife, Janice, then took over his Twitter account and said she’d managed it “until he escapes (usual method), bribes someone (very quick – might be out in a few hours), retains the right lawyer (will be a few days) or becomes warden of the jail, in which case we will have to force him out.”

She added: “He was not arrested for wearing the thong as a mask. He was arrested for refusing to replace it with a ‘medically certified’ over the ear mask. I refused as well. But they chose to arrest John, and leave me be.”

Janice also repeated her husband’s contention that masks stop bacteria, not viruses, and posted images of him wearing a black lace thong.

Later, she shared a video from their private jet as it took off for Munich, where they live.

“I’m following John’s instructions and heading back. He assured me he would be released,” she wrote.

In a subsequent tweet, McAfee announced that he was “back in Belarus and, with the exception of a black eye, no worse for wear.

“I cannot speak publicly about my fun and games yesterday, regrettably, but after a few hours sleep I will be back with my usual stream of conscious [sic],” he added.

On Saturday, he dispensed some pearls of wisdom about viruses and bacteria.

“Yes, coronavirus, although large for a virus, is still 2,000 times smaller than a large bacteria, which masks do stop. And yes, I know viruses in droplets are released when the droplets evaporate. Duh!! But … I have breathed through this mask. What could survive?” he wrote.

A day earlier, he announced that he’d auction off his collection of intimate apparel — and included a photo of himself wearing a thong that appears to be the one seen worn in a more traditional fashion by his wife.

“Proof that @theemrsmcafee actually softened the fabric for me before I protected myself with the mask,” he wrote.