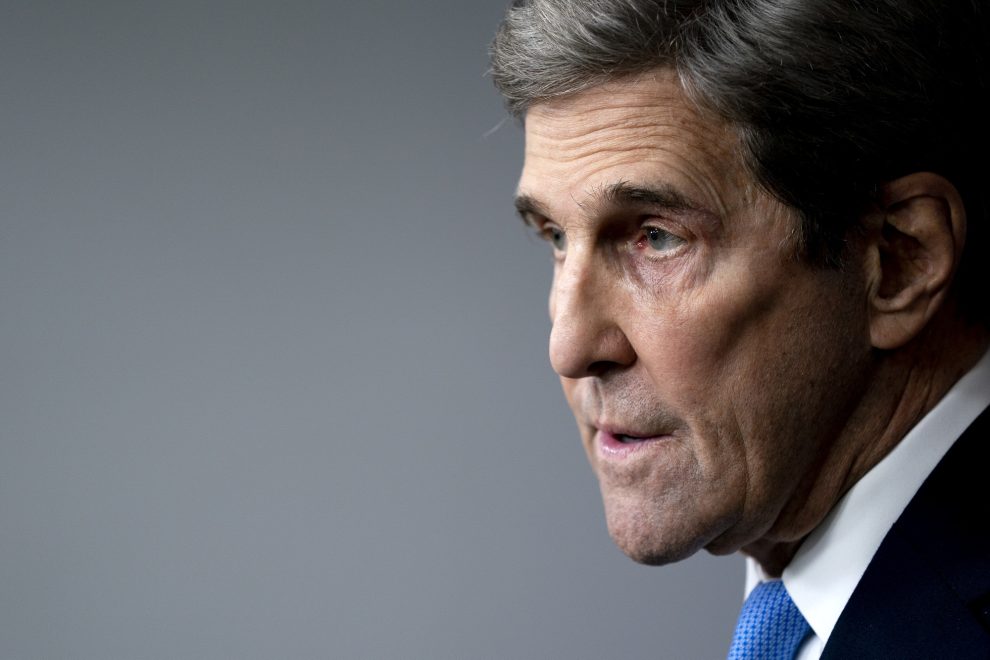 It’s not difficult to understand why President Joe Biden’s administration wanted to choke off American oil production. That isn’t to say one has to agree with the reason behind it — the idea that making oil and gas energy more expensive and scarce would force people to turn green.

Russia’s invasion of Ukraine has basically thrown the logic behind that strategy out the window.

At first, the Biden administration tried to hit Vladimir Putin’s regime hard without touching Russia’s energy exports. That quickly became untenable and Biden announced Tuesday we would be banning Russian oil imports — but in the weeks between the invasion of Ukraine and Biden’s announcement, the administration hadn’t made any moves to increase American energy production.

Why? If you want a glimpse of the suicidal rationale behind the strategy, you need look no further than climate czar John Kerry. Sure, he said Monday, the Ukrainian refugee crisis may look terrible — but it’ll be nothing compared to “climate refugees.”

The tone-deaf remark came as gas prices hit an all-time high this week. They’re unlikely to get lower anytime soon — and, as we’ve pointed out here at The Western Journal, this didn’t just begin when Putin invaded Ukraine. (We’ll keep documenting how the Biden administration’s energy policies have jacked up the price of gas starting from the beginning of his presidency, well before war broke out in Eastern Europe. You can help us bring America the truths the mainstream media won’t by subscribing.)

According to Fox News, Kerry told the audience at the CERAWeek annual energy conference in Houston that we need to keep pushing clean energy even as the Russia-Ukraine war rages, implying that the crisis in Ukraine is nothing compared with climate change.

“We’re already seeing climate refugees around the world,” he said.

“If you think migration has been a problem in Europe in the Syrian war or even from what we see now, wait until you see 100 million people for whom the entire food production capacity has collapsed.”

U.S. Climate Envoy John Kerry: "We're already seeing climate refugees around the world. If you think migration has been a problem in Europe in the Syrian war … wait until you see 100 million people for whom the entire food production capacity has collapsed." #CERAWeek pic.twitter.com/JII1YOHWuR

As of Wednesday, The Washington Post reported, the United Nations estimates 2 million refugees have left Ukraine since the war began. They have good reason to flee; not only is Russia ravaging the country but its forces seem to have no compunction against striking civilian targets.

Kerry’s minimization of the Ukrainian refugee crisis by using it as a springboard to talk about his pet climate change issues is definitionally “too soon,” inasmuch as the crisis is still going on (and, regrettably, is likely much closer to the beginning than the end).

Beyond the clanging tone-deafness of a bureaucrat determined to push his agenda no matter what tragedy has befallen the world, Kerry’s remark gives us a peek into the priorities of an administration facing the double whammy of energy price inflation and an existential threat to our ability to obtain gas and oil — and determined to do little about both under the alleged auspices of environmentalism.

For the third straight day, gas prices in the United States have reached unprecedented highs. On Thursday, the national average was $4.31 a gallon, according to the AAA. On Wednesday, it was $4.25 a gallon, up from another record of $4.17 on Tuesday.

It’s not that these gas price increases are anything new. We’d already been socked by inflation at the pump long before we knew Vladimir Putin was determined (or unhinged) enough to pursue his revanchist visions for the former Soviet Union via military misadventure. That would have been the time to take steps like reinstating the Keystone XL pipeline and dropping the administration’s rigid opposition to domestic oil drilling. Biden did nothing.

Now, he says he “can’t do much right now” about gas prices because “Russia’s responsible.”

REPORTER: What can you do about skyrocketing gas prices?

But that’s not really it. On Tuesday, Biden again touched upon the cost of gas, declaring in a Twitter post: “Loosening environmental regulations won’t lower prices. But transforming our economy to run on electric vehicles, powered by clean energy, will mean that no one will have to worry about gas prices. It will mean tyrants like Putin won’t be able to use fossil fuels as a weapon.”

But transforming our economy to run on electric vehicles, powered by clean energy, will mean that no one will have to worry about gas prices.

It will mean tyrants like Putin won’t be able to use fossil fuels as a weapon.

So he can do something — he just won’t because that’s not part of his agenda.

This is yet another tactic from the administration: Claiming the only way to be energy independent is to invest in electric vehicles, windmills and such. Sure, gas is really expensive right now and so are electric vehicles — but if you pony up now, eventually we’ll choke Putin off. Eventually. Maybe like, 20 years from now, but it’ll happen. Trust Biden.

These are the administration’s priorities when it comes to energy. And if you don’t believe me, believe climate czar Kerry, who said during a February interview that he was concerned war in Ukraine meant “you’re going to lose people’s focus, you’re going to lose, certainly, big country attention” on climate change “because they’re going to be diverted.”

You may be suffering from paying too much at the pump. They don’t care. The easiest way to counterbalance the influence of Russia on global energy markets is pumping and refining more oil and gas at home. They don’t care.

Instead, they’re going to talk about averting a chimerical “climate refugee” crisis as 2 million actual refugees flood out of Ukraine. They’re going to keep assuring us the way to beat Putin is Chevy Bolts, solar panels and windmills. There’s no intervening event that’ll take their focus off their suicidal agenda.

Despite a war and national security concerns over energy supply, the Biden administration is going to make sure they don’t “lose people’s focus” on their anti-energy agenda.

And Vladimir Putin couldn’t be laughing any harder.