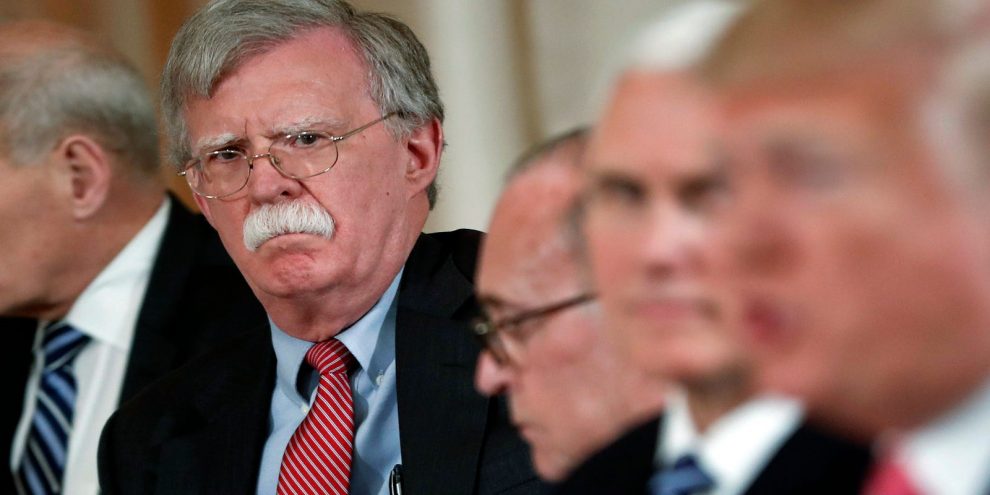 Setting the stage for the entry of Trump’s first rival in the Republican primary contest, Bolton took aim at his former boss for suggesting over the weekend that parts of the U.S. Constitution should be terminated to overturn his 2020 election defeat during an interview on NBC News’ “Meet the Press.”

If no other potential Republican candidates make “Shermanesque statements” in response to what Trump said, Bolton declared, “I’m going to seriously consider getting in.”

Bolton: “You can’t simply say, ‘I support the Constitution.’ You have to say, ‘I would oppose people who undercut it.’” pic.twitter.com/Twy8pluMYT

Bolton, known for his hawkish foreign policy views, served roles in the Reagan administration and as U.S. ambassador to the United Nations under President George W. Bush. He later worked as Trump’s national security adviser from April 2018 to September 2019, when Trump forced Bolton out amid foreign policy disputes.

During the summer before the 2020 contest, Bolton told ABC News he would not vote for Trump, claiming Trump was not fit for office, and stated he would “figure out a conservative Republican to write in.” Trump has been harsh on Bolton too, saying Bolton was “one of the dumbest people in Washington” after Bolton criticized Trump for reportedly considering martial law to overturn the 2020 election results.

Trump, who formally announced his 2024 campaign last month, is facing widespread backlash for his post on Truth Social on Saturday, reacting to the release of “The Twitter Files” by saying, “A Massive Fraud of this type and magnitude allows for the termination of all rules, regulations, and articles, even those found in the Constitution.” He later denied making the suggestion, but as of press time has not deleted the initial post.

Senate Minority Whip John Thune (R-SD) told reporters on Monday he disagrees with Trump’s statement and said the comments present a “golden opportunity” for potential challengers, according to The Hill.

At least one Republican who has entertained a 2024 run, former Governor Chris Christie (R-NJ), has spoken out against Trump for the suggestion. “It should not be hard to say that the 2020 election is over,” he said on ABC’s “This Week” on Sunday.

“I think to be a presidential candidate you can’t just say, ‘I support the Constitution.’ You have to say, ‘I would oppose people who would undercut it,’” Bolton said in his interview with NBC.