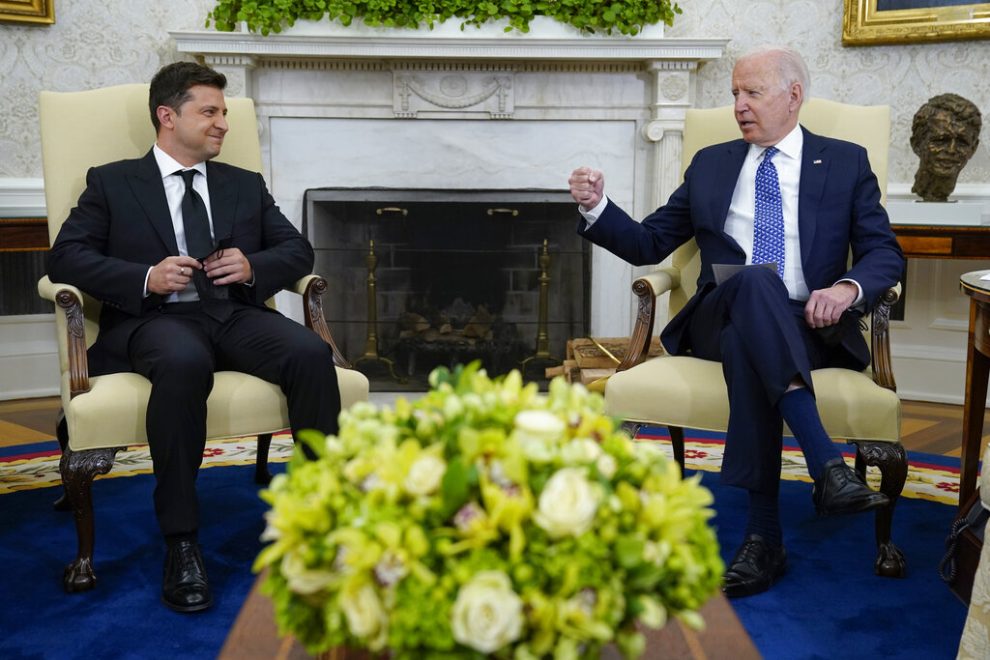 With so much other news going on domestically, the situation in Ukraine has largely fallen out of sight for most Americans. Yet, Russia is still invading the Eastern European nation, and the threat of a broader war still looms.

The ultimate responsibility for that lies with Vladimir Putin. Though, you can certainly lay some of the blame at the feet of the Biden administration, which flatly refused to take preemptive action via sanctions to attempt to diffuse the situation. The president’s stubbornness regarding any kind of off-ramp has also arguably prolonged the deadly conflict.

The remarks came as Biden was talking about his work to rally and solidify support for Ukraine as the war continues into its fourth month.

“Nothing like this has happened since World War II. I know a lot of people thought I was maybe exaggerating. But I knew we had data to sustain he” — meaning Russian President Vladimir Putin — “was going to go in, off the border.”

“There was no doubt,” Biden said. “And Zelensky didn’t want to hear it.”

Well, that’s nice. The empathizer-in-chief maligning a guy whose country is being invaded by nuclear-armed Russia, in order to gain a few claps at a fundraiser. Biden doing that is so on-brand because nothing is ever his fault. Inflation isn’t his fault, the economy isn’t his fault, Afghanistan wasn’t his fault, the border crisis isn’t his fault, and of course, he bears zero responsibility for Russia invading Ukraine. Do you understand how all this works now?

Back in February, before Putin made his move, I wrote an article on Biden’s apparent lack of any strategy regarding a possible invasion of Ukraine. At the time, it was obvious that the White House had no real plan other than shouting for a month that war was coming in an attempt to be able to say “see, we predicted this!”

To this point, I’ve assumed that the goal, naive as it may be, was to place Putin in the position of proving the United States right if he invades. The thought behind such a strategy would be to challenge the Russian leader’s ego, so that he’d choose to not invade just to be able to claim the West overreacted.

To be clear, that’s a really dumb strategy with little chance of success, but as it turns out, Biden’s actual strategy is even worse than originally thought. Instead of playing mind games with Putin to deter an invasion, according to Biden, the monthlong predictions of a coming invasion are simply meant to…assign blame?

Zelensky actually criticized Biden directly for his ridiculous push to assign blame instead of actually trying to deter the invasion. He released a statement telling the administration to put sanctions in place if they are sure a war is imminent.

…Zalensky’s critique is spot on. If a Russian invasion is a foregone conclusion, something Biden himself has said, then why are the Western powers not moving to enact sanctions now? What good is it going to do to sanction Russia once they’ve seized the oil-producing regions in the north and started the march toward Kyiv? At that point, the genie is out of the bottle, and Putin is not going to back down over threats of possible financial hardship.

Guess what Biden did? Absolutely nothing.

That’s really the issue here. From the beginning, Biden has treated Russia’s invasion of Ukraine as some kind of grade-school dust-up, believing he can claim victory just by saying “I was right.” But as many of us, including Zelensky, pointed out at the time, there was never anything to be gained by pointing fingers or trying to be “right” in regards to calling an invasion happening.

What could have been gained was stopping the invasion from happening in the first place by enacting sanctions and then providing Russia an off-ramp. The lack of strategic thinking by the administration throughout this entire ordeal has been astonishing to witness. And Biden wants to go to a fundraiser and take shots at Zelensky–as if he was the only one who saw this coming?

Besides, it’s highly unlikely that Zelensky “didn’t want to hear it.” Rather, he was clearly trying to put on a strong public front in the face of Putin’s threats, in the hope of deterring the invasion. Lastly, as I noted above, if Biden knew what was coming as he keeps bragging about, his lack of action, including preemptively preparing the US for the economic fallout, is even more inexcusable. In short, the president remains a pathetic, obfuscating leader who isn’t fit to hold his office. But what else is new?