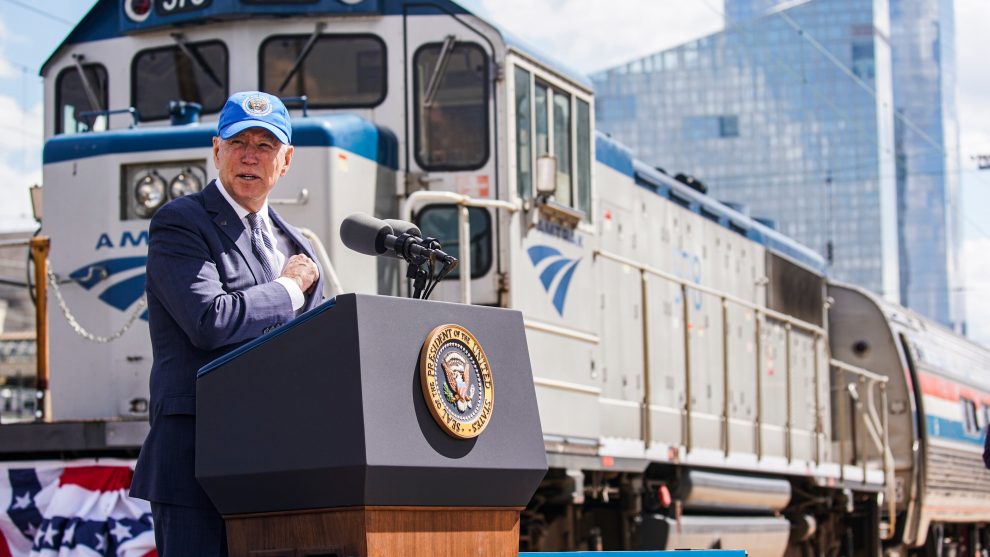 “I’ve been riding an Amtrak for almost as long as there’s been an Amtrak,” Biden said.

The president spoke at the 30th Street Station in Philadelphia, Pennsylvania, recalling his long history of traveling to Delaware on the train from Washington, DC, when he was a senator.

He recalled that he only ended up in Philadelphia if he slept through the Delaware stop.

“I only did it about four times,” Biden said.

Calling out Amtrak officials by name, Biden spoke about the importance of the train system to his daily life.

“Amtrak wasn’t just a way of getting home,” he said. “It provided me, and I’m not joking, [an] entire other family.”

Amtrak is heavily subsidized by the federal government to keep afloat, as political figures like Biden dream of restoring rail travel as a preferred traveling option. While the elite enjoy high-speed trips aboard the Acela train from D.C. to New York City, millions of taxpayers help prop up a system that few will ever use.

Biden promoted his $80 billion investment plan into Amtrak as part of his infrastructure proposal, which would build new train routes in cities across America.

He urged Americans to dream with him about a train traveling at speeds of 220 miles an hour or trains linking Chicago and Detroit or even a train between Los Angeles and Las Vegas, which he said could be “pretty popular on Fridays.”

“We have a huge opportunity here to provide fast, safe, reliable, clean transportation in this country,” he stated.

Biden said he is envious of China for its 23,000 miles of high-speed rail, calling for similar government spending programs.

“We’re behind the curve. But, folks, as I said the other night, America is on the move again,” he said.