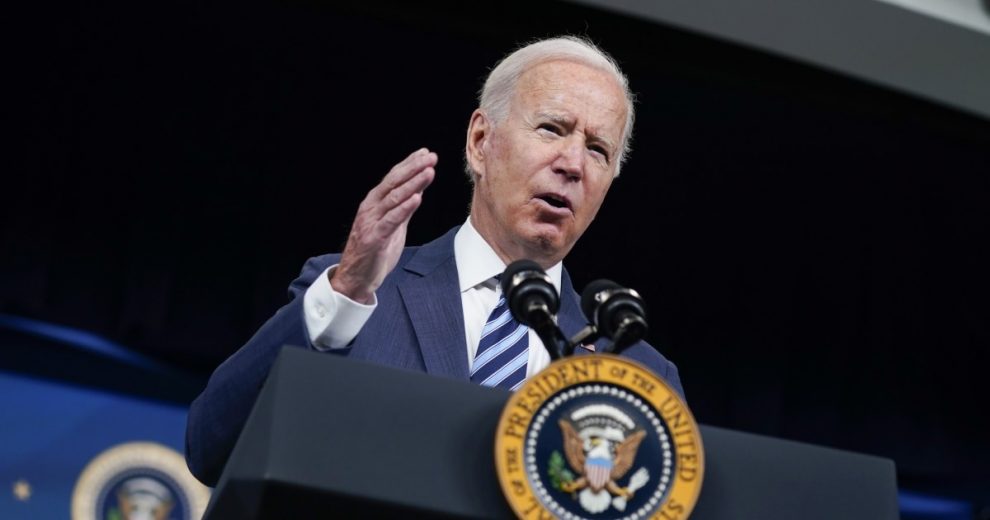 “This is not about freedom or personal choice,” Biden said during a speech from the White House. “It’s about protecting yourself and those around you.”

Biden used a sharper tone against unvaccinated Americans, lecturing them for refusing the vaccine.

“We’ve been patient, but our patience is wearing thin,” he said.

The president said he “understood” why vaccinated Americans were angry about the continued rise in cases around the country.

“Many of us are frustrated with the 80 million Americans who are not vaccinated,” Biden said.

The plan released by the White House noted the Department of Labor’s Occupational Safety and Health Administration (OSHA) would develop a rule requiring all private companies with 100 or more employees to make sure their employees were fully vaccinated or produce weekly negative test results.

“We’re going to protect vaccinated workers from unvaccinated co-workers,” Biden said.
He noted the “vast majority” of Americans were “doing the right thing” by getting vaccinated, but that he would make life more difficult for the unvaccinated.

Biden complained that unvaccinated were catching coronavirus and using up hospital capacity.

“We cannot allow these actions to stand in the way of protecting the large majority of Americans who’ve done their part and want to get back to life as normal,” he said.

The president’s announcement is a sharp turnaround from his position last December, when he told reporters he did not support a widespread national vaccine mandate.

But Biden acknowledged in his speech that the coronavirus pandemic was not going away, despite his best efforts to fight it.

“We’re in the tough stretch and it could last for a while,” he said.

The president also called for entertainment and sports arenas to require vaccines to enter or show a negative test to attend events.

He repeated that the vaccines were safe and that the government wanted to turn the corner on the pandemic.

The president also detailed the White House plan to require all staff in Head Start programs, the Bureau of Indian Education, and Department of Defense schools to get vaccinated.

Although Biden did not try to mandate vaccines for all public educations, he called on governors to require all school staff to get vaccinated.

He warned state governors who threatened to oppose his more draconian mandates that he would use his executive powers to enforce them.

“If these governors won’t help us beat the pandemic, I’ll use my powers as president to get them out of the way,” he said.