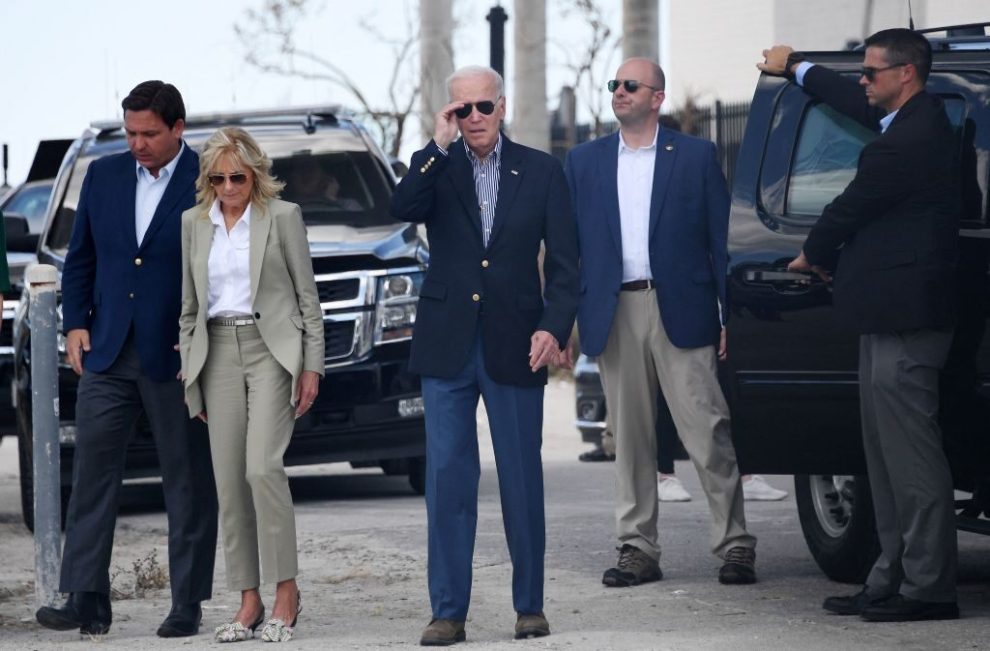 President Joe Biden met with Florida Governor Ron DeSantis on Wednesday and toured neighborhoods in the aftermath of Hurricane Ian, but he immediately pivoted to global warming.

“I think the one thing this has finally ended is the discussion about whether or not there’s climate change, and we should do something about it,” Biden said shortly after beginning his remarks.

After his speech, Biden spoke to reporters about his visit and again brought up global warming.

“First of all, the biggest thing the governor’s done and so many others have done is recognized this thing called global warming,” he said. “The world is changing.”

Climate change was very much on Biden’s mind as he recalled all of the disasters he had visited as president.

“To the ground! Gone!” he exclaimed.

The president and first lady Jill Biden met with DeSantis and his first lady of Florida, Casey DeSantis, in Fort Myers, Florida, and visited with local residents.

DeSantis thanked Biden for coming to Florida, shaking his hand after meeting him for the event.

“Mr. President, welcome to Florida, we appreciate working together across various levels of government,” he said.

Biden said he viewed the storm damage during a helicopter tour of the area but added, “I’m sure it’s much more worse on the ground.”

“You don’t have to have much of an imagination to understand that everything, everything historic, titanic and unimaginable storm just ripped it to pieces,” he added.

Biden boasted of all the money that Florida would get from his infrastructure bill, promising to “build back better.”

“Today we have one job and only one job, and that’s to make sure the people of Florida have everything they need to recover,” he said.

The president’s visit was disrupted as he was caught on a hot mic using an expletive as he spoke to Fort Myers Beach Mayor Ray Murphy.

“Keep the faith,” Biden said as he approached the mayor after speaking to reporters. “And by the way, you were raised the same way I was. No one fucks with a Biden.”