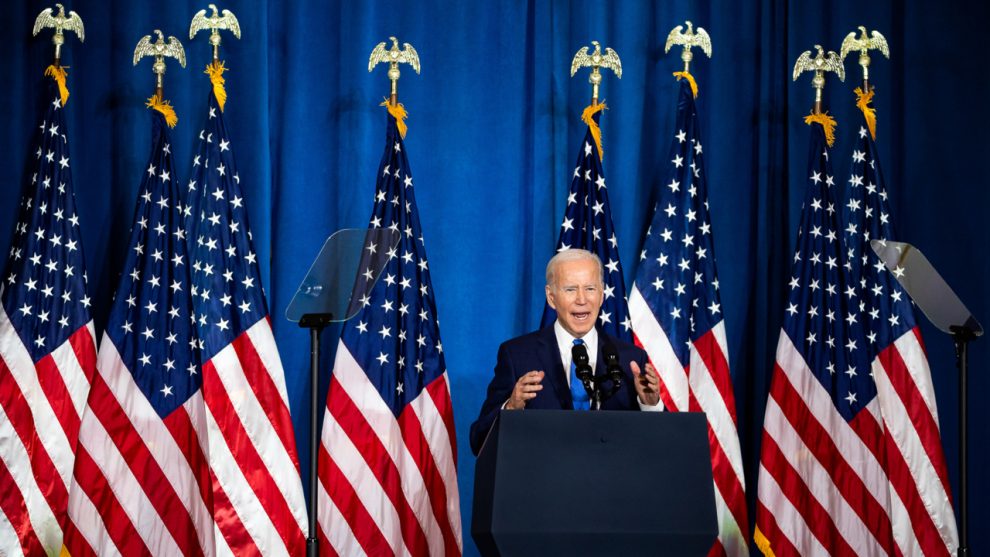 President Joe Biden again warned on Wednesday of Republicans taking power in the midterm elections, arguing the “very soul of America itself” was in danger.

“We the people must decide whether the rule of law will prevail or whether we will allow the dark forces and … thirst for power put ahead of the principles that have long guided us,” Biden said during a speech delivered inside Union Station.

Biden began his speech by recalling a deranged individual’s attack on Paul Pelosi on Friday after the assailant could not find Speaker Nancy Pelosi in their home in San Francisco.

The president again tried to connect the attack against Pelosi to January 6, when Trump supporters stormed Capitol Hill to protest the 2020 presidential election.

Biden blamed former President Donald Trump for challenging the results of the 2020 election, which he argued only increased the number of incidents of political violence.

“We don’t settle our differences in America with a riot, a mob, or a bullet or a hammer, we settle them peacefully at the battle box — ballot box,” he said.

Biden’s speech was sharply partisan, ignoring Democrats who protested the results of the 2016 election falsely declaring Trump an illegitimate president elected because of Russian influence. He also ignored incidents of Democrat political violence and political figures who refused to acknowledge legitimate elections.

Instead, he blamed “extreme MAGA” Republicans.

“In this moment, we have to confront those lies with the truth. The very future of our nation depends on it,” he said, calling it a “defining moment” in American history.

He warned that over 300 Republicans running for office had questioned the 2020 presidential election, which symbolized the “appetites of autocracy” versus American democracy.

“We must with one overwhelming unified voice speak as a country and say there is no place for voter intimidation or political violence in America,” he added. “No place period, no place ever.”

Biden repeated many of the talking points about democracy he has pursued since his inauguration, again blaming Republicans for endangering the future of democracy in the United States.

The president argued that the future of democracy was more important than all other issues, implicitly calling for Americans to vote Democrat in order to save the future of the country.

“We must vote, knowing what’s at stake, and not just the policy of the moment,” he said.