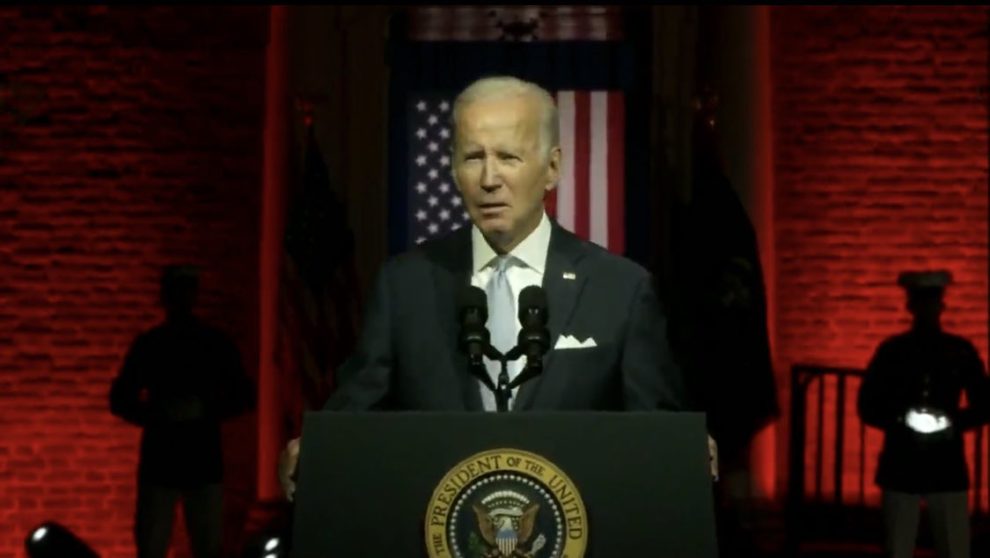 As RedState reported, excerpts from Joe Biden’s “MAGA speech” previewed a gross abuse of the Executive Office of the President. Sure enough, that’s exactly what was delivered as the president appeared in Philidelphia, standing in front of a blood-red background, flanked by Marines.

Lines were crossed that can’t be uncrossed, from the use of the military as props in a blatantly political speech to Biden suggesting that nearly half the country is a “danger” to the republic. This was a speech that went far beyond anything seen in the modern era of presidential addresses.

Of course, because we are dealing with a decrepit, senile old man, things didn’t start off well. The president couldn’t stop coughing as he tried to get into his remarks.

Already off to a rough start. Biden has a persistent frog in his throat and repeatedly coughing. pic.twitter.com/IA67AwAF5e

The meat of the speech was no better than Biden’s health. He kept repeating the term “MAGA,” painting those who voted for Donald Trump as evil fascists that pose a direct threat to the very well-being of the nation. That’s ludicrous, and as I’ve shared before, it’s also incredibly dangerous. When you begin attacking tens of millions of Americans as scum, suggesting they are going to destroy “our democracy,” that justifies just about anything in response, doesn’t it? Someone is going to get hurt based on his incitement.

Biden: “MAGA Republicans…embrace anger. They thrive on chaos. They live not in the light of truth, but in the shadow of lies.” pic.twitter.com/xKju8T13cl

It sure feels like Biden wants to provoke some kind of violent response. Why else even give this speech? What did it accomplish? What new was put out on the table? This is the same garbage Biden has been spewing for years, and it’s no more true today than it was when he was campaigning for president.

There’s also an inherent contradiction in what Biden is saying. He continually wants to paint himself as an uniter, while his words and actions exacerbate deep, disturbing divisions.

RIGHT BEFORE he says "I'm an American President — not of Red America or Blue America."

I’ve seen a lot of national addresses from US presidents over the years, as I’m sure many of you reading this have. I have never seen a speech like this, given under these circumstances. Presidents deliver campaign speeches, but they don’t call national addresses under the guise of their office to do so, and Biden’s attacks on tens of millions of Americans are unprecedented. You’d have to go back to Hillary Clinton’s “basket of deplorables” quip to find something similar in politics, but that was quaint compared to the president’s remarks.

There was one enjoyable part of the speech, though. A heckler decided to become a legend by spoiling Biden’s party.

And that was about it. Really, there was nothing else noteworthy said in this dumpster fire of a speech that broke all traditions and decorum surrounding the Executive Office of the President. It lasted about 25 minutes, with Biden being escorted out by Jill Biden as you’d expect. It was completely unnecessary and represented a rehash of the same trash the White House has been putting out on Twitter. That’s what this was. This was Twitter rage wrapped into a national address, and it was sad and pathetic to witness.