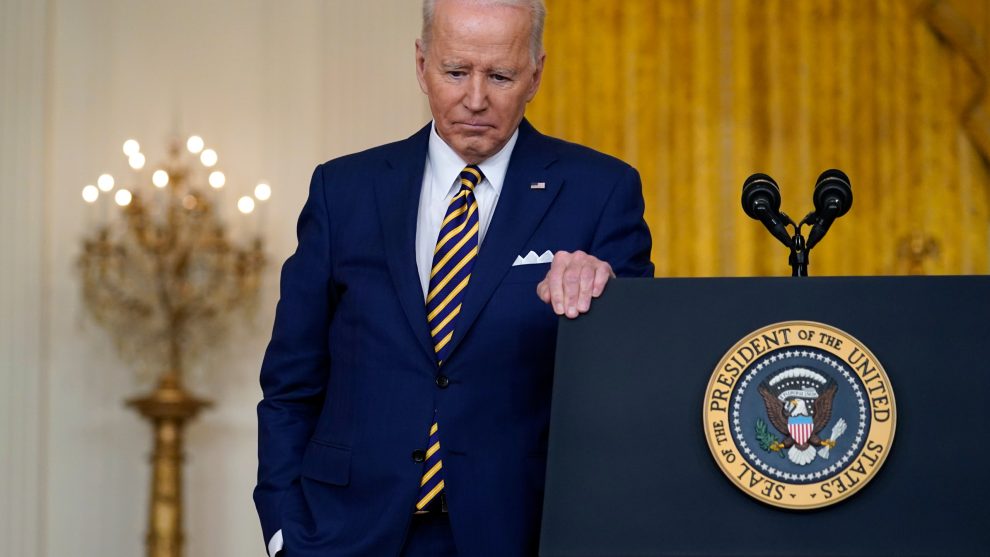 For the first time in his failed presidency, Biden’s average approval rating has sunk to a dismal 40.5 percent.

Additionally, for the first time in his failed presidency, Biden’s average disapproval rating has hit an all-time high of 55.3 percent.

His Fraudulency is now upside-down by a whopping 14.8 points.

While we will know more about the post-press conference polling after the weekend, it is no surprise to see the numbers headed in this direction directly after that shambolic Wednesday afternoon White House press conference.

The bizarre and terrifying sight of watching the President of the United States essentially give Russia the green light to invade Ukraine was just beyond the beyond. Never in the history of our country has something like that happened.

Yes, the White House tried to clean the mess up the following day, but the damage was done, and Vladimir Putin must be thrilled. What’s more, you had the White House making a fool of itself attempting to argue that Biden didn’t say what we all heard him say.

The nation is watching China Joe's presidency implode before our very eyes. https://t.co/cdC09ICPDm

And then, during that same press conference, Biden decided to dispute the 2022 midterm elections as illegitimate, even though those elections are still ten months away!

During a press conference at the White House, Biden was asked by a reporter if he believed the upcoming elections would be fair and legitimate.

“It all depends on whether or not we’re able to make the case to the American people that some of this is being set up to try to alter the outcome of the election,” Biden replied.

Once again, no one has ever seen anything like that. And again, the White House spent the following day trying to clean up the mess by gaslighting the public into believing our ears were lying to us when Biden clearly said what he said.

“What a stupid question,” Joe Biden replied, in a comment that was picked up by audio engineers as they were ushered out of the room. https://t.co/gLrVHVWHVS

These are not minor gaffes. The geopolitical ramifications of Russia moving into Ukraine are endless. As far disputing elections, the corporate media are furious at Biden for legitimizing former President Trump’s claim of 2020 vote fraud. It’s a big mess from a failed president who makes things worse every time he opens his stupid mouth.

This press conference was supposed to be a reboot of sorts, a game-changer to stop the hemorrhaging of his approval numbers. Instead, as is usually the case whenever he dodders before the cameras, Biden only made things worse. Much worse.