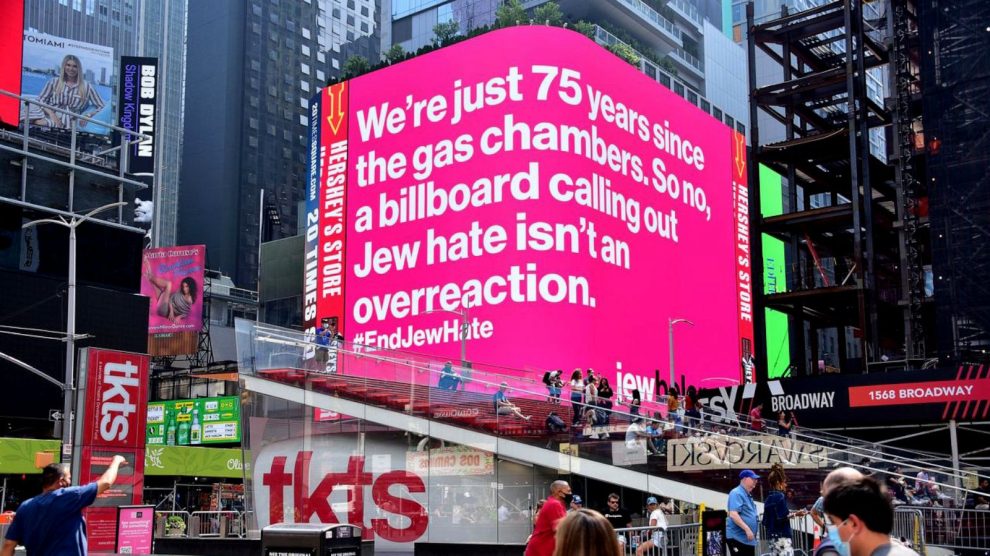 Following the targeting of Orthodox Jews by The New York Times in over a dozen “misleading and one-sided portrayals” of their community, a Jewish group has now taken out a series of billboards in New York City calling out the paper.

The billboards are located near the Lincoln Tunnel, in Times Square, and on a building next to the paper’s Eighth Avenue headquarters and ask the outlet to “please stop attacking our community.”

Avraham Weinstock, chief of staff at the nonprofit Agudath Israel of America, said the Grey Lady had published “entirely one-sided” articles critical of Orthodox Jewish day schools known as yeshivas, which educate students in the Torah and Talmud along with standard subjects.

Weinstock said the Times has published offensive portrayals of the Orthodox Jewish community in over a dozen articles since September 2022. The most recent articles continue the paper’s history of attacking Jews and the state of Israel including attempting to minimize the Holocaust.

The articles included an 8,000-word feature published on the front page of the paper on Sept. 11, 2022, in both English and Yiddish, calling the yeshivas “failing public schools” funded in part by taxpayer dollars and added that the day schools don’t provide enough secular studies to prepare students for life.

The billboards are a project of Agudath’s KnowUs.org to combat the outlet’s one-sided reporting as well as educate the public about the Jewish Orthodox lifestyle. KnowUs.org launched the billboard campaign on Wednesday along with a digital campaign.

In September, New York State’s Board of Regents adopted new regulations requiring parochial schools to get their secular curriculums approved by the government. The yeshivas and other private schools have sued to block the new rules.

Agudath’s executive vice president Rabbi David Zwiebel said in a statement, “Orthodox Jews have been under increasing assault in the streets of New York. Now we are under assault by the ‘paper of record.’ The time has come to speak up, lest our silence be construed as acquiescence to the normalization of anti-Orthodoxy.”