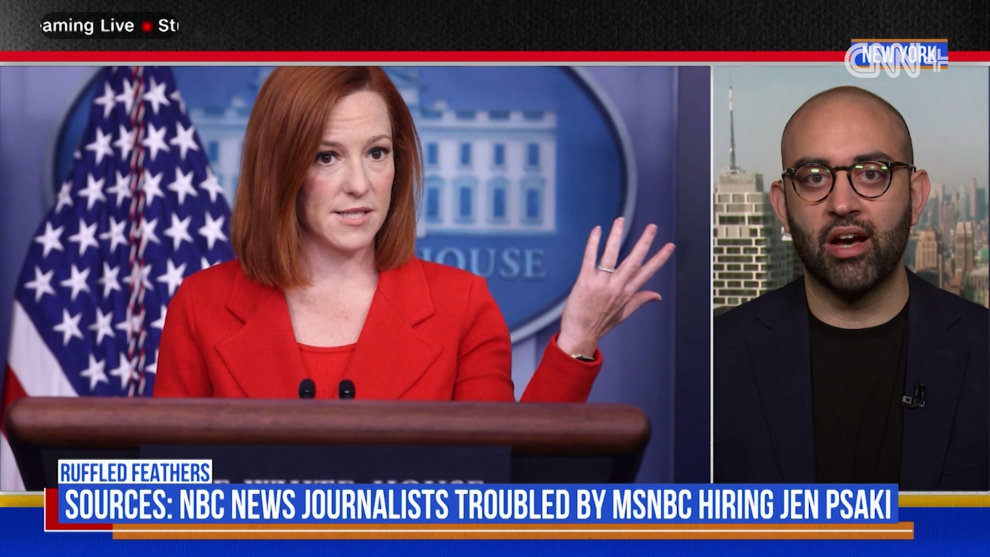 As Darcy gives some specifics of Jen Psaki’s arrangement, there are revealing aspects about him and CNN.

There have been plenty of questions and speculation surrounding the announced plan for White House Press Secretary Jen Psaki to depart from her position in May and take residence with MSNBC on their Peacock streaming service. Some of the consternation has been coming from inside NBC News itself, with many questioning the decision and how it reflects on their news outlet.

This internal debate has reached such a peak that CNN’s Oliver Darcy reported that the president of NBC News, Noah Oppenheim, called for a teleconference with the Washington D.C. bureau reporters to air out what was taking place. Darcy says he has inside sources who provided him with details of the call, giving a bit of a revealing look into the machinations of the news division. What Darcy did not intend is something else – he has also revealed some of the foibles involving himself and his own network.

First, the provided details. Oppenheim spoke to his reporters and stressed heavily that NBC News and MSNBC, though related, are completely separate entities, and that hiring and staffing decisions at MSNBC are entirely made on their own. Oppenheim detailed to them that he has no authority over MSNBC and had no role in bringing in Psaki, stressing that the lineups and broadcasts at the cable channel are in no way a reflection on the news operations at the broadcast network.

When things get revealing is in looking at the way it was detailed. Oppenheim reiterated that MSNBC’s opinion wing is not to be seen as reflective of the news side at NBC. What MSNBC was described as having was “perspective programming,” and that is an entity fully divorced from the NBC News division. Darcy gives us these specifics, but he in no way lends any further commentary or critique of the statement.

He allows it to stand in his report, but this in no way is meant to suggest he was wrong, or that he should have said something. Yet, the very fact that he accepts this premise that there is a distinction between news reporting and the opinion-pundit broadcasts – what they labeled as “perspective programming” – exposes Darcy and the way he, and CNN, have been approaching Fox News. Here are the issues that now arise.

The Lack Of Critique

Interesting in his detailed report is that Darcy barely touches on the moves by Psaki herself. It is all about the decisions at MSNBC, and how it affects NBC News; Psaki’s actions while a standing member of the administration is not addressed, and this is revealing. When the news broke last week she was moving Brian Stelter barely had a remark. He reported on it, and that was it. No commentary. This differed greatly from the approach when Kayleigh McEnany signed on with Fox a year ago.

One way to think about Fox News in 2021 is as the Trump White House in exile. Today Kayleigh McEnany joined as a contributor to the network pic.twitter.com/ngrbbhgS1m

McEnany’s hiring was cause for concern and hand-wringing at CNN, but with her, there is a huge difference; her term in the White House already concluded, so seeking work elsewhere was not unusual nor a conflict of interest. Psaki on the other hand is an active press secretary so there is ample reason to call things into question. Her relationship with reporters from both NBC and MSNBC could have been very affected, as they may have held back on tough questions or Psaki could have chosen reporters based on an established cozy relationship.

Darcy and Stelter saw no reason to even explore these issues.

CNN’s Own Role In Negotiations

The main factor in Oliver avoiding the issue of Psaki’s backroom negotiations was revealed in a line he mentioned halfway through his piece.

“Psaki engaged in talks with several television networks, including CNN, about potential jobs she could take after exiting the White House. ”

Well, there it is. Oliver cannot condemn her for working deals when we see that she was in talks with his own outlet. They were part of her controversial move, so it gets completely bypassed. He cannot criticize her without implicating CNN itself. But there is another wrinkle exposed here.

Psaki is a former CNN employee, leaving her position with the network to go to work in the Biden administration. Now that she is returning to the media industry it would seem that CNN had the inside track for her return, but instead, she opted for MSNBC and its streaming platform. This is deeply interesting considering CNN was on the verge of rolling out its new streaming vertical, and while hyping all their signings for CNN+ Jen was not lured in for this new venture with her former employer. That speaks loudly.

How This Reflects On Fox Coverage

One other telling detail coming to light involves Darcy accepting this concept of the news side being insulated from the opinion/perspective of programming. Allowing this concept to stand as he does means he accepts the idea that news and opinion are segregated elements, and they generally are just that. Except this flies in direct opposition to his persistent coverage of Fox News.

How often has Darcy, and his mentor Mr. Stelter, impugned the entirety of Fox News based on things Tucker Carlson has said on his opinion show? They hold his views not as his own but as emblematic of the entire network. He will say that Tucker’s words are accountable all the way up to Rupert Murdoch, and then Murdoch is held responsible for this network mindset. There is no designation between the opinions and the straight news; it is the position of Fox entire.

This was the very thing Chris Wallace alluded to in a recent interview, when he pointed at Tucker’s views on his show seen on Fox Nation, the subscription side of the network. That has to be seen as even further removed from the news than the perspective programming, but it was held up

But with MSNBC, they are seen as having separate aspects, where opinion somehow has zero effect on the news. Joy Reid’s perpetual claims of racism with every news item are relegated solely to The Reid Out. If Rachel Maddow puts out provably false investigation reports it bears no reflection on the network, she is part of the Perspective side, and therefore the accountability firewall is in place.

All of this illustrates how the Jen Psaki move is presenting challenges to the journalism complex. They initially viewed her move as a natural development. A member of the Democratic Party moving over to the news side was only looked at as a positive, absent any analysis, and it was only after they were in too deep with the negotiations that the very obvious conflicts of interest become apparent.

As a result, there are efforts of a scrambling nature taking place, and in the process of going back to clear up issues, Oliver Darcy has exposed things about his outlet on the other side. More thought — and more actions — are now going to be needed.