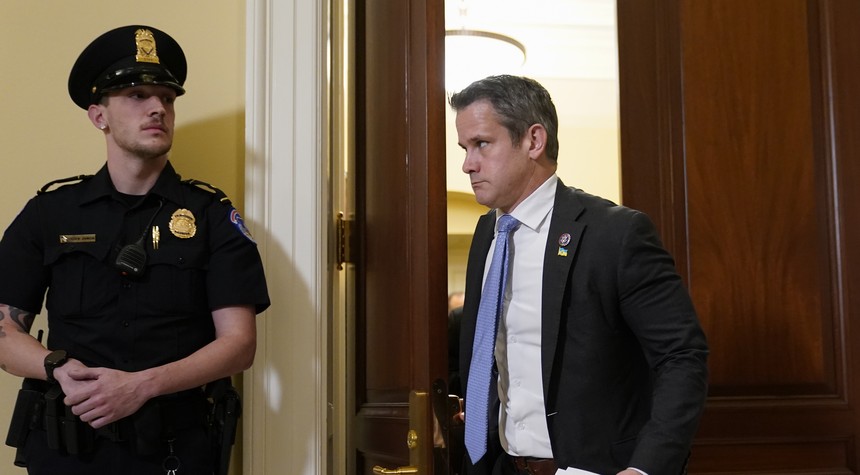 Fresh off accusing former President Donald Trump and other Americans critical of federal government overreach of being “un-American” simply because they’re opposed to politically-motivated DOJ-approved witch hunts against former presidents, Rep. Adam Kinzinger (R-Ill.) has moved on to his next target.

On Sunday, “X Strategies, LLC” CEO Alex Bruesewitz, a private citizen, had the nerve to criticize Kinzinger on Twitter over his “un-American” accusation toward millions of Americans, calling him out for his double standards in the process.

True to form, Kinzinger, who has weaponized his membership on the January 6 Select House Committee in order to target his political opponents, did not respond to the accusation (probably because he knows it’s true). Instead, he tried to change the subject by accusing Bruesewitz of committing fraud against the U.S. government.

“Alex did you pay back your PPP loan despite having no employees?” Kinzinger responded.

In a follow-up tweet, Kinzinger pretended to have “the receipts”:

The problem with Kinzinger’s accusation, however, is that it’s not true, and both Bruesewitz and his attorney trotted out their own receipts to counter Kinzinger, complete with a cease and desist letter.

Yesterday, Rep. @AdamKinzinger FALSELY accused me, a private citizen, of defrauding the US Gov’t.

He stated that I took PPP Loans “despite having no employees.”

Only problem is, he knew I had employees.

My attorney, @JeffClarkUS, has sent Kinzinger a Cease & Desist. 1/2 pic.twitter.com/lHMcYmqqOS

Indeed, in Clark’s cease and desist letter to Kinzinger, he noted on pages two and three how the purported Republican Congressman “deceptively edited” information he found off the ProPublica website – information that curiously enough is no longer there – to cut off where the page indicated that X Strategies had two employees at the time of the PPP loan request. Screengrabs taken by both Bruesewitz and Clark show what Kinzinger tweeted (that left off the employee information) and what ProPublica’s site originally had on their X Strategies page before the page mysteriously disappeared.

Further, Clark pointed out on page four that on another publicly available page on PPP loan information that lists the U.S. Office of Personnel Management as its source, it clearly shows the “jobs retained” information as “two” at the time of the April 2020 loan approval, which per PPP terms was forgiven including the accrued interest.

In addition to all of this, Clark alleges that Kinzinger, who he says acted with “actual malice,” did in fact know that X Strategies had employees considering he’s interacted with them on occasion on the Twitter machine.

As Bruesewitz indicated above, Kinzinger has been given five days to retract his tweet and issue a formal apology before legal action presumably will be taken. As of this writing, Kinzinger has not responded, and the tweet is still up.

For anyone wondering what type of work X Strategies does, it exists to “promote, advocate for, and help elect” MAGA Republicans, the latter of who President Biden himself has been viciously maligning as part of a calculated election-year strategy and who Kinzinger, with his response to Bruesewitz’s initial criticism and his claim of Trump supporters being “un-American,” has also wrongly maligned because under this administration and its acolytes, WrongThink will not be tolerated.

It should not be lost on anyone here that Kinzinger, who loves to brag about his military service in defense of American ideals or whatever is using his vast power to try and silence private citizens who disagree with him, and to smear others who are merely exercising their constitutional right to criticize government institutions like the FBI and DOJ as “un-American.”