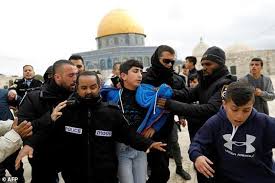 Israeli police said Sunday they arrested a top Palestinian Muslim official in Jerusalem after scuffles at a flashpoint holy site in the city in the past few days.

The arrest drew condemnation from Jordan, the custodian of the Al-Aqsa mosque compound, in the disputed city.

Israeli police spokesman Micky Rosenfeld said Abdel Azeem Salhab had been arrested for violating an order preventing entry into a prohibited area of the holy site.

Salhab is the head of the council of the Waqf in Jerusalem, the religious authority that governs the site.

Official Palestinian news agency WAFA reported that his deputy Najih Bakira was also arrested, but police had not confirmed it.

The arrests follow the detention of 60 others overnight Thursday to Friday as police said they were responding to calls for unrest at the holy site surrounding Friday prayers there.

Some have since been released with an order not to visit the holy site.

See also  Gen. Michael Flynn Punches Back at His Government Tormentors
→ What are your thoughts? ←
Scroll down to leave a comment: