A CAPTURED ISIS fighter has made a chilling confession detailing how the terrorist group planned on exploiting vulnerabilities in the US border with Mexico to take advantage of smuggling routes and to target financial institutions.

Abu Henricki, a Canadian with dual Trinidadian citizenship, said that he was sought out to attack the US from a route starting in Central America.

The ISIS fighter was interviewed last month – together with over 160 ISIS defectors and returnees – by research group the International Center for the Study of Violent Extremism.

The study, published in Homeland Security Today, concluded: “We have learned … about multiple individuals who knew of, or were themselves offered, or pressured by the ISIS emni (intelligence) to return to Europe to mount attacks at home.”

“We learned that, indeed, there was at least one ISIS plot for their cadres to travel from Syria to penetrate the US southern border by infiltrating migration routes.

Henricki was detained by the SDF in Rojava, Syria, and spoke with researchers for more than an hour on May 12, giving his firsthand account of being attracted to, travelling, joining and serving in the Islamic State Caliphate, first as a fighter and then later unable to fight due to chronic illness.

In video footage of Henricki’s confession, he opens up about a plot in which he says he and other Trinidadians were invited in late 2016 to attempt to penetrate the US borders to mount financial attacks.

He explains: “The emni [ISIS intelligence arm] was inviting us.

“Apparently, they have the contacts or whatever papers they can get to a false ID, false passports [to send me out for this kind of attack].

“They have their system of doing it. So that’s maybe the way that I could have gone out with other individuals.”

He adds: “It wasn’t me alone. They were sending you to Puerto Rico and from Puerto Rico [to Mexico].

“They were going to move me to the Mexican side [of the US southern border] via Puerto Rico.

“This was mastermind[ed] by a guy in America. Where he is, I do not know.

“That information, the plan came from someone from the New Jersey state from America.

“I was going to take a boat [from Puerto Rico] into Mexico. He was going to smuggle me in … I don’t know where I’d end up.”

Henricki detailed how he and his Canadian wife were imprisoned by ISIS.

He recounts: “I was asked to leave [ISIS] to go to America because I’m from that area. Cause they wanted [and] planned to do something and I refused.” “I refused to do it. That is why also I’m put into [ISIS] prison and been tortured.

“They beat me a lot. [I was] suspended from the back, standing on my toes, given no food for a few days, waterboarded – while blindfolded, and they put a bag over your head.

“I knew I went to prison because I said no [to their offer of an external attack mission].”

Anne Speckhard, director of the International Center for the Study of Violent Extremism, told Fox News:“ISIS has organised plots in Europe with returnees so it seems entirely plausible that they wanted to send guys out to attack.

“The issue that makes a North American attack harder is the travel is more difficult from Syria.

“So the idea that they would instead use people who were not known to their own governments as having joined ISIS might make it possible for them to board airplanes.”

However, Ms Speckhard reasoned: “This plot is likely dead as those who were pressured to join it are according to Abu Henricki now all dead and ISIS is in retreat as we know.

“That doesn’t mean we shouldn’t disregard that it was a plot. We should take thoughtful steps to prevent.” 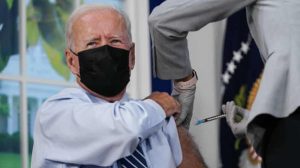