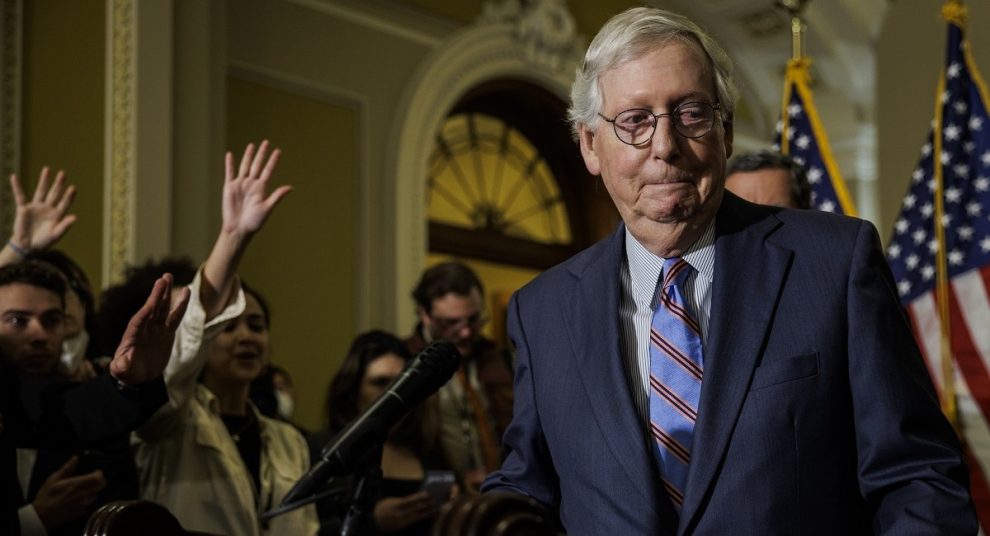 Supporters of Donald Trump claim that Senate Republican Leader Mitch McConnell (R-KY) is responsible for Senate losses because he failed to direct sufficient funding to candidates who ran with the endorsement of the former president. An analysis of campaign finance records by The Daily Wire explored whether that is true.

The most specific criticism came from Arizona Republican Senate candidate Blake Masters, who told Tucker Carlson that “McConnell decided to spend millions of dollars attacking a fellow Republican in Alaska instead of helping me defeat Mark Kelly. Had he chosen to spend money in Arizona, this race would be over.”

It is true that McConnell’s super PAC did not spend in the Masters race, and that it spent $6 million in Alaska in a race between two Republicans. However, those are the only examples like that, and the amount in question was relatively insignificant given the total spending, and highly unlikely to have closed the substantial gap in votes in that race.

Overall, the charge of not spending heavily on Senate races is diametrically opposite the reality of McConnell’s super PAC, the Senate Leadership Fund. It was by far the largest spender of any super PAC in the 2022 cycle. It spent $230 million, vastly exceeding what its Democrat counterpart, the Senate Majority PAC, spent. Trump’s super PAC, MAGA Inc., spent only 6% of what McConnell’s did. At $15 million, it ranked #12 among super PACs.

And in Pennsylvania, McConnell spent a whopping $52 million boosting Mehmet Oz. That massive spending was viewed as necessary because Oz was viewed as a poor candidate. He had little traction even among Pennsylvania Republicans until Trump’s endorsement. (At a major conference for conservative Pennsylvanians during the primary season, this reporter observed Oz’s table with not a single person in line, as throngs of grassroots conservatives queued up at the tables of other candidates.) Despite the race arguably being so close because of Trump’s Oz pick, Trump’s super PAC spent only $3.5 million supporting Oz’s campaign.

McConnell’s PAC also spent money in competitive Senate races that Trump’s did not, including in North Carolina, New Hampshire, and Wisconsin.

Earning some conservatives’ ire was the fact that the Senate Leadership Fund spent $6 million opposing Republican Kelly Tshibaka in an effort to help moderate Republican incumbent Lisa Murkowski win. Because of Alaska’s ranked-choice voting system, the two Republicans are facing each other. Trump endorsed Tshibaka, but his super PAC did not pay for any ads in the race. Some Trump supporters believe that the $6 million would have been decisive if it was allocated to Arizona instead.

However, Masters already had a head start in outside spending thanks to billionaire Peter Thiel. Masters was supported by $53 million in super PAC spending, essentially tied with his opponent Mark Kelly, at $57 million. With spending so high already, it’s not clear that an extra $6 million would have made a difference. With 90% of votes counted as of Saturday night, DecisionDeskHQ has called the Arizona race for Kelly with a significant gap: 52% to 46%.

There was also no reason to assume that the $6 million would have been reallocated to Arizona instead of, say, Nevada, where Democrats were outspending Republican super PACs by a greater margin, and the race is far closer. Additionally, it was Thiel who reportedly backed away from an additional $10 million in spending he was contemplating.

Trump’s own financial contribution to the Arizona Senate battle was $3.7 million, making up only 6% of Masters’ outside cash. That’s despite Trump’s main PAC, Save America, taking in $107 million in the 2022 cycle, and having nearly $70 million in the bank as of October 19. If he had spent most of that money supporting his chosen Arizona candidate, Masters could have had double the super PAC spending of his opponent.

Instead, Trump set up a web page that purported to raise money for both himself and Masters. But hidden from the user — unless they clicked a toggle in the fine print — was the fact that for every $100 donated, $99 went to Trump and $1 went to Masters. That’s despite Masters imminently facing a critical race and Trump not being on the ballot this year. Many donors may have refrained from giving directly to Masters after that, believing that they had already done their part.

Masters spokeswoman Katie Miller did not object to the arrangement, telling The Daily Wire: “Blake is extremely grateful for all of President Trump’s support both financial and his energy and time spent campaigning in Arizona.”

If Masters views financial parity as key to closing the gap in votes, it is hard to fault the insignificant gap in outside spending versus campaign dollars, where Masters himself came out woefully short: Masters raised $12 million compared to $79 million by Kelly, the worst ratio of any of the Trump-backed Senate candidates. Campaign donations are limited to about $5,000 and, coming from ordinary people, can be a proxy for grassroots support. Because of this cap, super PACs don’t donate to campaigns, but they get around it by spending money on the campaign independently — though the lack of coordination with the campaign can diminish the strategic value.

It is true that Masters appears to have been snubbed by some national politicians, but the same people did not withhold cash from similarly America First candidates like Vance. The snub also appeared to extend beyond McConnell: The National Republican Senatorial Committee (NRSC), which donates roughly $46,000 directly to candidates, also did not give to Masters, though it gave to other Trump-endorsed candidates like Vance, Oz, and Walker. The NRSC is chaired by Florida Sen. Rick Scott, who is not necessarily a McConnell ally: He is leading the charge in the Senate to postpone leadership elections rather than blindly re-electing McConnell.