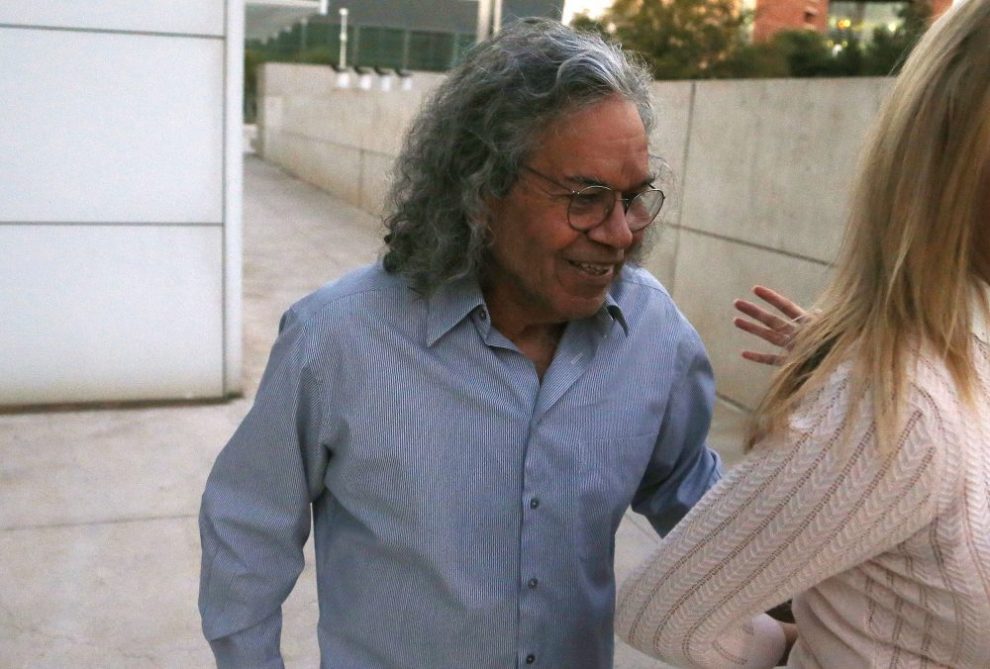 BOSTON — The billionaire founder of the pharmaceutical company Insys Therapeutics and four other top executives were found guilty on Thursday in a scheme involving bribes and kickbacks to physicians who prescribed large amounts of a fentanyl spray to patients who didn’t need the painkiller.

After 15 days of deliberations, a jury in Boston federal court reached a first-ever conviction of a drug company CEO in the federal government’s fight to combat the opioid crisis, finding the Arizona-based company’s founder and former chairman John Kapoor guilty of racketeering conspiracy charges.

Racketeering charges carry a maximum penalty of 20 years in prison.

The landmark conviction in the U.S. District Court for the District of Massachusetts – in which the Justice Department first made indictments in 2016 – marks a victory on the legal front in the government’s efforts to fight the rising number of opioid overdoses. Kapoor’s 2017 arrest came on the same day that President Donald Trump declared the epidemic a public emergency.

The case centered on a fentanyl-based pain medication called Subsys, a powerful, highly addictive and potentially dangerous narcotic that is intended to treat patients with cancer suffering from intense pain.

Federal prosecutors argued that doctors between 2012 and 2015 provided patients large numbers of Subsys prescriptions – including to non-cancer patients –  in exchange for kickbacks and bribes from the Insys executives. Some of the doctors, already convicted of crimes the states where they practiced, testified against the Insys executives during trial.

U.S Attorney Andrew Lelling, the top federal prosecutor in Massachusetts, hailed the historic significance of “a landmark prosecution that vindicated the public’s interest in staunching the flow of opioids into our homes and streets.

“Today’s convictions mark the first successful prosecution of top pharmaceutical executives for crimes related to the illicit marketing and prescribing of opioids,” he said in a statement. “Just as we would street-level drug dealers, we will hold pharmaceutical executives responsible for fueling the opioid epidemic by recklessly and illegally distributing these drugs, especially while conspiring to commit racketeering along the way.”

The verdict was delivered in a packed courtroom with reporters and other onlookers spilling into the hallway.

In finding the executives guilty of a “pattern of racketeering activity,” the jurors agreed four of the five committed the following crimes: illegal distribution of a controlled substance, mail fraud, wire fraud, honest services mail fraud and honest services wire fraud. They found Gurry committed only mail and wire fraud but was still a co-conspirator.

Appeals from the defendants appear likely.

Kapoor, 75, exited the courthouse through a backdoor and declined to comment. His attorney, Beth Wilkinson, said in a statement that Kapoor is “disappointed in the verdict, as we are” and that the weeks of deliberations “confirm that this was far from an open-and-shut case.” She added: “We will continue the fight to clear Dr. Kapoor’s name.”

Simon’s attorney, Steven Tyrrell, said, “That’s the normal process,” when asked about the possibility of an appeal. Lee, escorted by her mother and attorneys, appeared to be fighting back tears as she left the courthouse. “She’s strong and this is wrong,” her mother said.

An Insys spokesperson said in a statement to USA TODAY that the company is committed to helping people and saving lives.

“The actions of a select few former employees of the company are not indicative of the hard work conducted by our talented team today who have dedicated themselves to improving the lives of patients and formulating life-saving molecules across several indications,” the statement said.

Two other co-conspirators, Michael Babich, the former CEO of the company, and Alec Burlakoff, former vice president of sales, pleaded guilty to charges in January. Both testified against his former colleagues in the trial, which took place over two months.

The bribes took “different forms,” according to prosecutors, but were usually disguised as fees that the company paid the physicians for marketing events. The government cited in-person meetings, telephone calls and texts to inform sales representatives that the key to sales was using speaker program series to pay practitioners to prescribe the fentanyl spray.

The historic verdict comes amid other cases being prosecuted nationally stemming from a surge in opioid use and overdose deaths.

Use of the painkiller Fentanyl — considered 50 times stronger than heroin and up to 100 times more potent than morphine — is on the rise in particular. In 2017, more than 28,000 of the nation’s overdose deaths involved synthetic opioids, according to the U.S. Centers for Disease Control and Prevention. In most cases, the synthetic opioid involved was fentanyl or one of its analogs.

The company took concerted and unusual steps to drive sales of the drug, even having a rap video produced for their sales team that featured a giant dancing bottle of Subsys that Burlakoff was shown to be wearing at the end.

“I love titration, yeah, that’s not a problem,” the rap song in the video goes, referring to the process of increasing doses. “I got new patients and I got a lot of them.”

The government also alleged that the company leaders defrauded health insurance companies, which they said were reluctant to approve the payments for patients who didn’t have cancer.

Prosecutors said company employees – at the direction of Babich and Gurry – carried out that part of the scheme from a call center at the company’s corporate offices. Sales representatives and other workers disguised the identity and location of their employer and lied about  patients’ diagnoses, the type of pain being treated and the patient’s course of treatment with other medication, prosecutors said.

The physicians who prescribed the Subsys to non-cancer patients practiced in Alabama, Michigan, Florida, Texas, Illinois, Florida, New Hampshire, Connecticut and Arkansas. An Alabama doctor linked to the case was sentenced to 20 years in prison in 2017 and a Michigan doctor last year was last year sentenced to 32 months in prison.

Federal prosecutors called nearly 40 witnesses to the stand during the trial with the defense bring fewer witnesses and as they made their case over two days.

Following the long-awaited verdict, U.S. District Court Judge Allison Burroughs said that “regardless of the outcome” attorneys from both sides should be proud of the representation they provided.

Kapoor was at one time found to have a net worth of $2.4 billion by Forbes. But his net worth fell to $1.75 billion in 2017 amid the indictments of Insys executives.

A sentencing hearing has not been set but is expected to take place in three months.