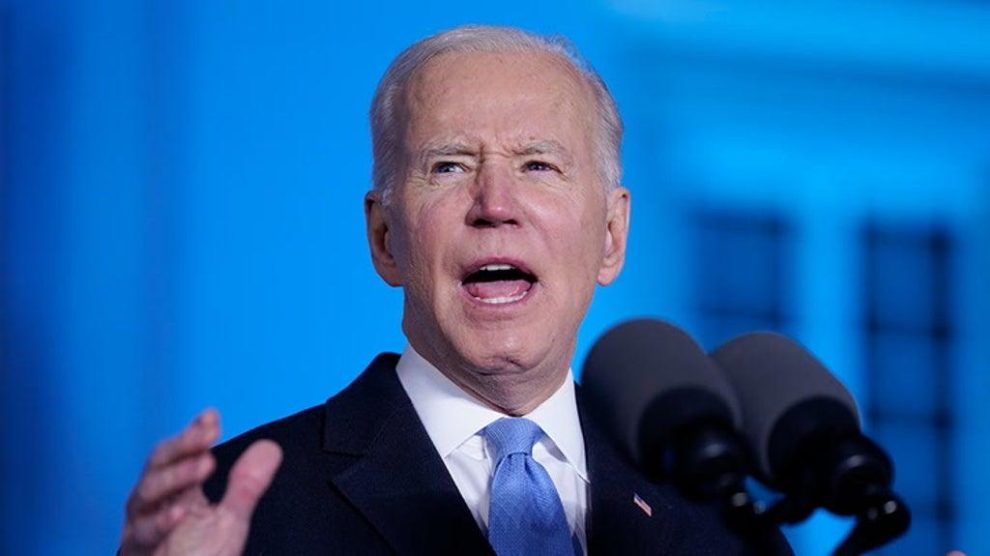 President Joe Biden demanded that Russian President Vladimir Putin be removed from power in a dramatic speech in Warsaw, Poland, on Saturday.

“For God’s sake, this man cannot remain in power,” Biden cried out at the conclusion of his speech. “God bless you all and may God defend our freedom.”

It is unclear whether Biden’s comment was part of his prepared remarks.

The president repeatedly called out Putin directly, with disdain in his voice, taunting him for his failure to take over Ukraine.

“Notwithstanding the brutality of Vladimir Putin, let there be no doubt that this war has already been a strategic failure for Russia,” Biden said.

He signaled solidarity with the Ukrainian people, praising them for proving Putin wrong.

“Putin thought Ukrainians would roll over and not fight. Not much of a student of history,” he said. “Instead, Russian forces have met their match with brave and stiff Ukrainian resistance.”

But Biden warned Europe they would need to stay united to defeat Putin.

“This battle will not be won in days, or months either. We need to steel ourselves for a long fight ahead,” he said.

He also called out Putin for lying about Ukraine and his decision to invade.

“Putin has the gall to say he’s denazifying Ukraine,” he said. “It’s a lie. It’s just cynical. He knows that. And it’s also obscene.”

He also condemned Putin for his “war of choice” against Ukraine, accusing him of “using brute force and disinformation to satisfy [his] craving for power and control.”

“Putin has the audacity, like all our autocrats before him, to believe that might will make right,” he continued.

Biden boasted of the success of his economic sanctions to punish Russia for their invasion.

He celebrated that many American businesses had left Russia completely, “from oil companies to McDonalds.”

“As a result of these unprecedented sanctions, the ruble almost is immediately reduced to rubble,” he said.

He praised Ukraine and Europe for their resistance against Putin during the first month of the war, but warned it was critical to stay united.

Biden began his speech in Poland recalling Pope John Paul II’s famous 1979 speech during his visit to his native Poland, which sparked the solidarity movement in the country. which ultimately defeated communism.

“We stand with you. Period,” he said in a message to the Ukrainian people.

The president also spoke about visiting with Ukrainian refugees in Warsaw and interacting with some of the children.

“I saw tears in many of the mothers’ eyes as I embraced them… I didn’t have to speak the language to feel the emotion in their eyes, the way they gripped my hand. The little kids hung onto my leg,” he recalled.

Biden said American troops were sent to bolster the defense of Poland and the NATO nations, not to fight Russians in Ukraine.