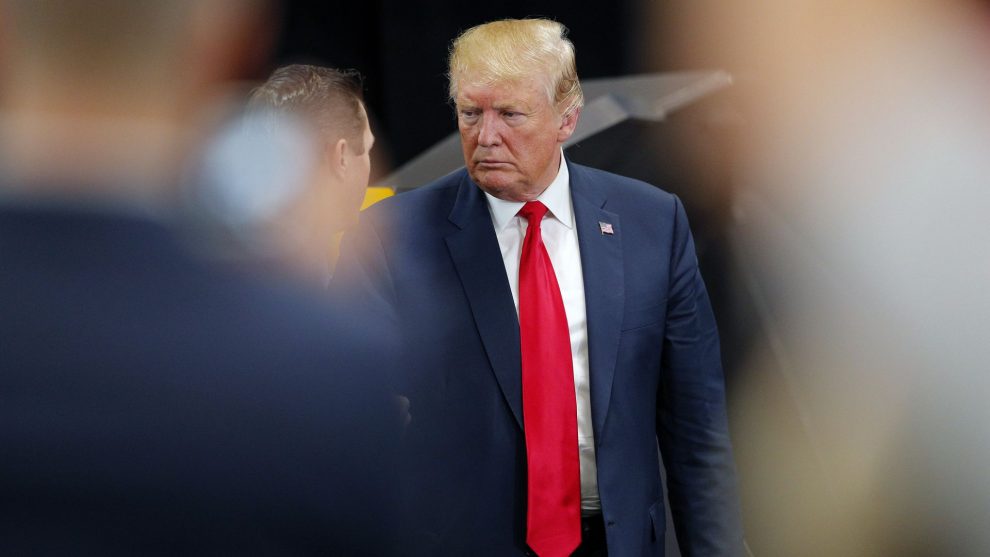 That decision alone — to hold a press conference before the report’s publication — sparked a pitched battle with congressional Democrats, providing just the latest sign that the report drop won’t end the D.C. warfare over the Russia probe.

“Attorney General Barr’s regrettably partisan handling of the Mueller report, including his slanted March 24th summary letter, his irresponsible testimony before Congress last week, and his indefensible plan to spin the report in a press conference later this morning — hours before he allows the public or Congress to see it — have resulted in a crisis of confidence in his independence and impartiality,” they said. “We believe the only way to begin restoring public trust in the handling of the Special Counsel’s investigation is for Special Counsel Mueller himself to provide public testimony in the House and Senate as soon as possible.”

The statement set the tone for what is sure to be a combative day, even by Trump-era standards.

It was not immediately clear exactly when on Thursday the DOJ would release the redacted version of the nearly 400-page investigation into Russian election meddling, but the document was expected to be delivered to lawmakers and posted online by noon. With just hours to go until that moment, hopes for finality amid a deep national divide — and persistent accusations of far-flung conspiracies — are all but certain to remain unrealized.

Although Barr has already revealed that Mueller’s report absolved the Trump team of illegally colluding with Russia, Democrats have signaled that the release will be just the beginning of a no-holds-barred showdown with the Trump administration over the extent of report redactions, as well as whether the president obstructed justice during the Russia investigation.

Trump’s legal team is preparing to issue a comprehensive rebuttal report on Thursday, to challenge any allegations of obstruction against the president, Fox News has learned.

The lawyers originally laid out their rebuttal in response to written questions asked by Mueller’s team of the president last year, according to a source close to Trump’s legal team.

Those individuals, Barr said, did not include Trump. “No, I’m talking about people in private life, not public officeholders,” the attorney general said at a hearing last week.

In a filing in the ongoing Roger Stone prosecution on Wednesday, the DOJ revealed that certain members of Congress will be able to see the Mueller report “without certain redactions” in a secure setting. Stone, a longtime confidant of the president, is awaiting trial on charges including giving false statements and obstructing justice.

Barr and Rosenstein are expected to take questions at the Thursday press conference, which was first announced in a radio interview by Trump and confirmed by the DOJ, and they’ll likely be pressed on the precise nature of the final redactions.

The chairman of the House Judiciary Committee, Democrat New York Rep. Jerrold Nadler, has said he is prepared to issue subpoenas “very quickly” for the full report if it is released with blacked-out sections, likely setting in motion a major legal battle.

Grand jury information, including witness interviews, is normally off limits but can be obtained in court. Some records were eventually released in the Whitewater investigation into former President Bill Clinton and an investigation into President Richard Nixon before he resigned.

Both of those cases were under somewhat different circumstances, including that the House Judiciary Committee had initiated impeachment proceedings. Federal court rules state that a court may order disclosure “preliminary to or in connection with a judicial proceeding,” but prominent Democrats — including House Speaker Nancy Pelosi — have dismissed suggestions that Trump should face impeachment.

Another major area of scrutiny will be Barr’s decision, along with Deputy Attorney General Rod Rosenstein, that Mueller had not uncovered sufficient evidence to prosecute Trump for obstruction of justice.

In his four-page summary of Mueller’s findings released late last month, Barr stated definitively that Mueller did not establish evidence that Trump’s team or any associates of the Trump campaign had conspired with Russia to sway the 2016 election — “despite multiple offers from Russian-affiliated individuals to assist the Trump campaign.”

But on obstruction, Barr wrote that Mueller had laid out evidence on “both sides” of the issue, even as he acknowledged that it would be more difficult to prosecute an obstruction case without evidence of any underlying crime. That evidence, on Thursday, will go under the microscope.

The report may also contain unflattering details about the president’s efforts to exert control over the Russia investigation. And it may paint the Trump campaign as eager to exploit Russian aid and emails stolen from Democrats and Hillary Clinton’s campaign.

The report’s release will also be a test of Barr’s credibility, as the public and Congress judge the veracity of a letter he released relaying what were purported to be Mueller’s principal conclusions.

Barr, who was unanimously confirmed by the Senate to the role of attorney general in 1991 before reclaiming the role in February, has endured withering criticism from Democratswho say he is covering for the president.

After Barr announced plans for the Thursday press conference, Nadler quickly charged that Barr “appears to be waging a media campaign” on behalf of Trump.

In a statement joined by several other Democrat committee chairs late Wednesday, Nadler called for Barr to cancel the press conference.

“This press conference, which apparently will not include Special Counsel Mueller, is unnecessary and inappropriate, and appears designed to shape public perceptions of the report before anyone can read it,” the Democrats wrote. “[Barr] should let the full report speak for itself. The Attorney General should cancel the press conference and provide the full report to Congress, as we have requested. With the Special Counsel’s fact-gathering work concluded, it is now Congress’ responsibility to assess the findings and evidence and proceed accordingly.”

Mueller is known to have investigated multiple efforts by the president over the last two years to influence the Russia probe or shape public perception of it.

In addition to examining former FBI Director James Comey’s firing, Mueller scrutinized the president’s reported request that Comey end an investigation into Trump’s first national security adviser; his relentless attacks on former Attorney General Jeff Sessions over his recusal from the Russia investigation; and his role in drafting an incomplete explanation about a meeting his oldest son took at Trump Tower with a Kremlin-connected lawyer.

But this week, Trump, who has long said that voicing his opinions about the “witch hunt” against him wasn’t a crime — showed no signs of backing down.

“Wow! FBI made 11 payments to Fake Dossier’s discredited author, Trump hater Christopher Steele,” Trump wrote on Wednesday. “The Witch Hunt has been a total fraud on your President and the American people! It was brought to you by Dirty Cops, Crooked Hillary and the DNC.

On Monday, he wrote: “Mueller, and the A.G. based on Mueller findings (and great intelligence), have already ruled No Collusion, No Obstruction. These were crimes committed by Crooked Hillary, the DNC, Dirty Cops and others! INVESTIGATE THE INVESTIGATORS!”

Wow! FBI made 11 payments to Fake Dossier’s discredited author, Trump hater Christopher Steele. @OANN @JudicialWatch The Witch Hunt has been a total fraud on your President and the American people! It was brought to you by Dirty Cops, Crooked Hillary and the DNC.

Republicans, including House Intelligence Committee ranking member Devin Nunes, have pushed aggressively for answers into the origins of the Mueller probe, which began shortly after Trump fired Comey in May 2017.

Trump cited several justifications for terminating Comey, including what the president called his mismanagement of the Hillary Clinton email probe, and Comey’s refusal to publicly announce that the president was not under investigation.

The former FBI head acknowledged in testimony in December that when the bureau initiated its counterintelligence probe into possible collusion between Trump campaign officials and the Russian government in July 2016, investigators “didn’t know whether we had anything.”

An op-ed in The Washington Post earlier in the week, entitled “Admit it: Fox News has been right all along,” pointed to the role in the media in spreading the Russia collusion narrative.

Justice Department legal opinions say that a sitting president cannot be indicted, but Barr said he did not take that into account when he decided the evidence was insufficient to establish obstruction.

That conclusion was perhaps not surprising given Barr’s own unsolicited memo to the Justice Department from last June in which he said a president could not obstruct justice by taking actions — like the firing of an FBI director — that he is legally empowered to take.

Overall, Mueller brought charges against 34 people — including six Trump aides and advisers — and revealed a Russian effort to influence the 2016 presidential election.

Twenty-five of those charged were Russians accused either in the hacking of Democratic email accounts or of a hidden but powerful social media effort to spread disinformation online.