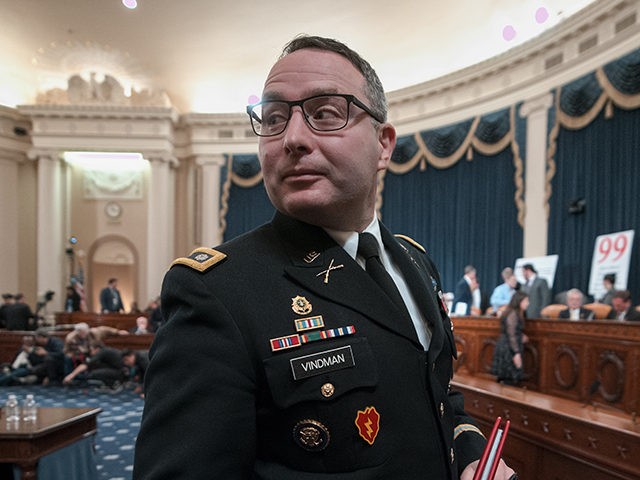 Vindman, a Purple Heart recipient in the Iraq War, had worked at the National Security Council (NSC) and heard the telephone call between Trump and Ukrainian President Volodymyr Zelensky in July which Democrats claimed Trump coerced his counterpart to interfere in the 2020 presidential election by launching investigations into Joe Biden.

After overhearing the call, Vindman complained to NSC counsel — though not to his immediate supervisor, Tim Morrison. In his closed-door testimony, he admitted that he did not think the president had done anything “illegal,” merely that he had done something “wrong.” He also complained that the president’s policymaking in the region had gone outside the “interagency consensus,” a claim that Republicans said showed Vindman’s primary concerns were about foreign policy, which is set by the president and not by the executive agencies that are supposed to report to him.

In his public testimony, Vindman admitted to speaking to two people outside the White House about the Ukraine call. One was a State Department official, and the other was an unidentified member of the “intelligence community.” House Intelligence Committee Chairman Rep. Adam Schiff (D-CA) shut down Republican effort to ask Vindman who that was, ostensibly because of the risk of identifying the so-called “whistleblower” who first launched the inquiry.

After President Trump was acquitted by the Senate, Vindman and his brother, Lt. Col. Yevgeny Vindman, who was also an NSC official, were both reassigned to the Army.