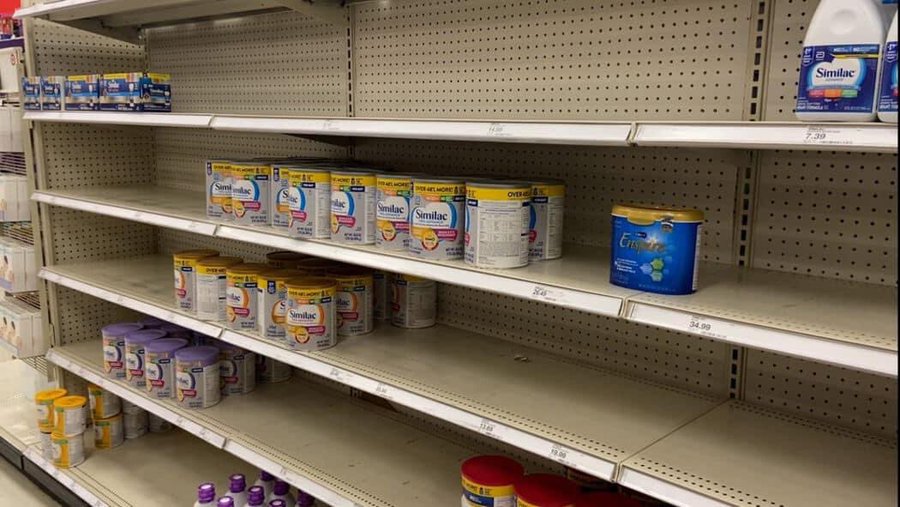 The nationwide shortage of baby formula that has sent mothers desperately rushing from store to store has evaded one lucky group: illegal immigrants detained by Border Patrol.

According to videos posted by a Florida lawmaker, the Biden administration has been shipping “pallets” of baby formula to migrant holding facilities.

“They are sending pallets, pallets of baby formula to the border,” said Republican Rep. Kat Cammack in one of two online postings yesterday. “Meanwhile, in our own district at home, we cannot find baby formula,” she added, holding a photo of empty shelves where the formula would be.

Cammack said that a border agent sent her photographs of the deliveries, and she posted one online.

“They’re receiving pallets and more pallets of baby formula at the border,” she said holding one of the photos showing both Advantage brand formula and Gogo Squeez applesauce. “This was taken at Ursula processing facility [in McAllen, Texas] where thousands are being housed and processed and then released,” said Cammack.

She said the agent told her: “‘Kat, you would not believe the shipment I just brought in.’ He has been a border patrol agent for 30 years and he has never seen anything quite like this. He is a grandfather and he is saying that his own children can’t get baby formula.”

The first photo is from this morning at the Ursula Processing Center at the U.S. border. Shelves and pallets packed with baby formula.

The second is from a shelf right here at home. Formula is scarce.

The shortage was sparked by a manufacturing issue and then a rush on stores. The shortage has become one of the issues coloring the concerns about growing inflation and economic troubles under President Joe Biden.

The New York Times, for example, reported on the troubles Texas parents are having finding the formula that is being shipped by their homes to the migrant holding centers. In a story headlined, “A Baby Formula Shortage Leaves Desperate Parents Searching for Food,” the New York Times said: “Some parents are driving hours at a time in search of supplies. Others are watering down formula or rationing it, hoping for an end to the shortage.”

Cammack was not critical of migrants receiving the formula but said the administration should put American parents first.

“I don’t know about you, but if I am a mother, anywhere anytime in America, and I go to my local Walmart or Target or Publix or Safeway or Kroger or wherever it may be that you shop and you are seeing their shelves and you are seeing signs that you are not able to get baby formula. And then you see the American government sending by the pallet thousands and thousands of containers of baby formula to the border, that would make my blood boil,” she said.

She added: “It is not the childrens’ fault at all. But what is infuriating to me is that this is another example of the America last agenda that the Biden administration continues to perpetuate.”