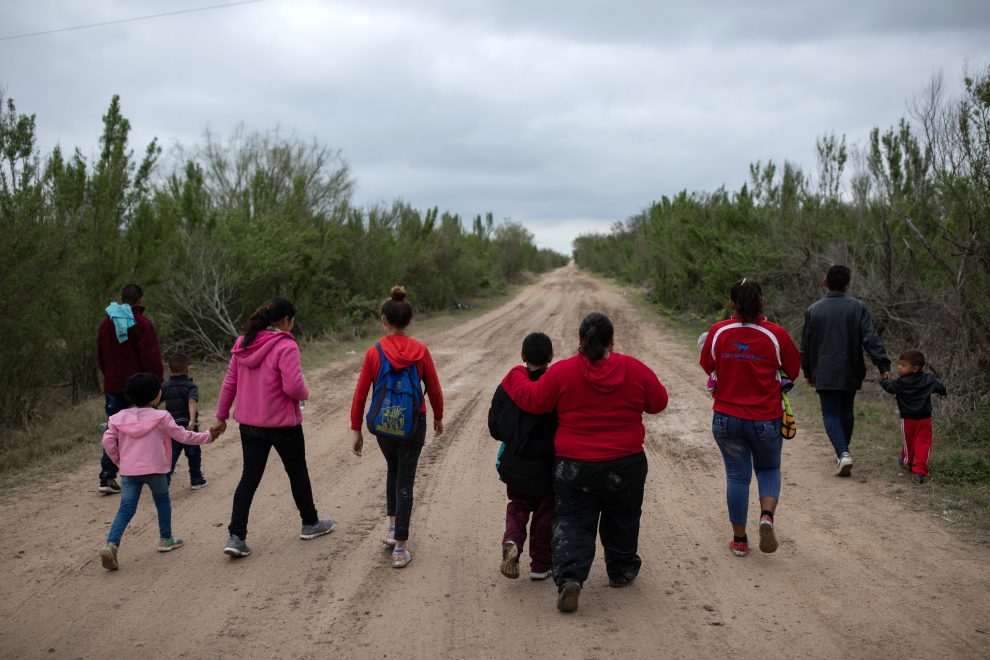 Houston, Texas, is one of the rare, nice big cities left in this country. A little hot in the summer, but great people, very pretty neighborhoods and a lot going on. Thanks to the energy sector, biotech and aerospace, Houston has an enormous and still robust economy. It is hardly some dying mill town in the Northeast or the Upper Midwest. Your kids might want to move to Houston someday, maybe after college. It’s not Baltimore.

But all of a sudden Houston, Texas is starting to look a little more like Baltimore. Crime in Houston has gotten scary. The murder rate there has risen by more than 50% in just the last year. It’s bad. Here’s a local news report:

MATTHEW SEEDORFF, KRIV REPORTER: A deadly start to the year across Houston. Police investing at least 41 homicides through 24 days. … So far this year Houston has more murders than New York City, Los Angeles, even Chicago.

DOUGLAS GRIFFITH, HOUSTON POLICE OFFICERS’ UNION PRESIDENT: It’s one of those things where I’m fearful just for my family to go out of the house.

DOUGLAS GRIFFITH, HOUSTON POLICE OFFICERS’ UNION PRESIDENT: If it keeps up this pace we are going to be well over 500 murders this year.

I’m fearful just for my family to go outside the house. As you heard, that was the president of the police union in Houston, so he would know. It’s amazing this is happening in all places in Houston, and what’s so telling about this crime wave is how recently it began.

Murders in Houston started to spike in a big way after Joe Biden became president. Why is that exactly? Very simple answer: Joe Biden opened the southern border. Texas shares more than 1,200 miles of border with Mexico. There is a brutal cartel war underway in Mexico right now. It’s been going on for a long time. Many of the combatants in that war have now moved north into Texas. They brought drugs with them. They’ve also brought machine guns.

This fall, a felon opened fire on Houston police officers with a fully automatic rifle. You hear a lot about assault weapons. But the truth is authorities don’t see fully automatic weapon weapons very often. They are heavily regulated, and typically they’re owned by collectors.

But automatic weapons are very common in war zones, and there is a war in Mexico. So, with no border in place, the cartels are bringing their armaments here. There are firefights in Houston.

POLICE OFFICER: It’s Houston police. Let’s do this the easy … (gunshots in the background).

That’s automatic weapons, fire. It sounds like Syria or Mexico, but it’s an apartment complex in Houston, Texas. We could go on if you know anybody who lives in Houston. Call and ask, How has your city changed recently? And they’ll tell you. Open borders did this, Houston didn’t do it to itself, this was done to Houston and not just to Houston, to so many places across this country where millions of illegal aliens have flooded in during Joe Biden’s presidency.

On Monday, for example, more than 100 illegal Haitian migrants landed in the Florida Keys in a single boat. Instances like this are no longer uncommon in the state of Florida. The world is coming to America’s shores. Why? Because they’re fully aware that the Biden administration is rewarding foreign nationals for violating our federal immigration law. It is an invasion.

Huge numbers of Americans are dying as a result of that invasion. 100,000 dead last year of drug addicts. Most were killed by fentanyl that is trucked in from Mexico across open borders. Long term, there are massive labor market disruptions, there is evaporating social cohesion and so on. The costs of this have been beyond calculating, and this is exactly why no sane country opens its borders ever, ever, anywhere.

What Joe Biden is doing right now has never been done, and it’s about to get much worse. We’re not guessing. Currently, a Trump era regulation called Title 42 allows the Border Patrol to turn illegal migrants back to Mexico on the grounds that there’s a pandemic in progress, so we probably shouldn’t let millions of people infected with COVID move here without permission. Seems sensible. But according to Democrats, this rule is racist because it might slow the human wave of migration. So for months, they’ve been demanding that the Biden administration suspend this rule.

SEN. CHUCK SCHUMER: I urge President Biden and Secretary Mallorca’s to immediately put a stop to these expulsions and to end this Title 42 policy at our southern border. We cannot continue these hateful and xenophobic Trump policies.

REP. SHEILA JACKSON LEE: In addition, a relic, Title 42, exists. It is a relic of the Trump administration. It was created to be mean-spirited. … Title 42, I ask for a suspension of it.

SEN. ALEX PADILLA: I urge the Biden administration and my colleagues to remember the refugees who are waiting at our border, kept out by the cruel and unnecessary Title 42 policy.

SEN. BOB MENENDEZ: Look, Title 42 is being used in a way that I think is indiscriminate and that violates the basic essence of our law. … But this process that the Biden administration has continued from the Trump administration in my mind is really inexcusable.

So, your kid has to wear a mask in school, but illegal aliens get to come here with no restrictions at all, despite the fact they may be infected with COVID because otherwise you’re a racist.

That’s the case they were making, and so finally, inevitably, the Biden administration has caved. Turns out even trying to maintain basic public health standards is unacceptable if it gets in the way of increasing mass immigration. Title 42 is being nullified.

A similar rule you should know will still apply to you. American citizens are not exempt to this day. You as a citizen are not allowed to return to the United States without permission from the CDC. Rochelle Walensky will sign off on that. So coming back to the country you were born in is no longer your birthright. But illegal aliens now face no barriers at all. And of course, they know it. Everyone knows it. It’s not their fault. It’s our president’s fault.

According to Axios, “U.S. intelligence officials are privately bracing for a massive influx of more than 170,000 migrants at the Mexico border” now that Title 42 is ending.

So the wave grows, the total transformation of this country accelerates. So we’ve been very passive in the face of this, people make grumpy noises about it, no one’s done anything. How should we respond?

Well, the same way we respond to any other invasion. With the U.S. military. That’s why countries have militaries to stop invasions, and this would not be a hard invasion to stop. Our military could seal the border with Mexico in days. That would save American lives. It would restore order. And it would end the invasion.

Does that sound crazy like a misuse of the U.S. military? Well, keep in mind that Nancy Pelosi called in the US.. military to protect her from Trump voters at the U.S. Capitol. She treated our soldiers like her personal security detail.

And then, of course, at this very moment, we are sending thousands of American troops and billions in military American military hardware to Eastern Europe to help Ukrainians restore their borders. So the obvious question is: Why not here? Why not take America’s safety, your family’s safety, as seriously as Nancy Pelosi takes her own safety?

That seems like a fair question. Probably not Russian disinformation. Probably an honest question. We spoke to Rep. Maria Salazar in Miami last night, and we asked that question of her. She refused to answer.

SALAZAR: That is why I have created a whole plan, so we can really seal the border, because you know what? My community, the ones that I represent –

TUCKER: Would you call for sending –

TUCKER: Do you represent America, if I could say?

SALAZAR: Sure, I do. That’s a misrepresentation.

TUCKER: You support military equipment — okay, then, would you support the U.S. military securing the United States border tonight or on the same timetable as sending MiGs to Ukraine? How about that?

Oh, it’s hypothetical. I’ve got a plan, right? How many plans have you heard about from Republicans for, say, the past twenty-five years? Many, many, many.

To restate this is a highly dangerous situation that the Biden administration has placed our country in. Mexico, whatever its merits, is in the middle of a war, not a new war, a war that has raged on for more than a decade, a war that has likely killed more than 100,000 people so far.

There are videos of trucks burning in the town of Nuevo Laredo. That’s just feet from the U.S. border in the state of Texas. The video is the aftermath with three hour gun battle between cartels and government forces. The situation there is so chaotic that the trucks just burn in the middle of the road. No one comes to put out the fires to restore order to arrest anyone.

So that’s not a law enforcement action. That’s a war. That’s what wars are like. A few years ago, the Sinaloa cartel used heavy machine guns and armored vehicles to win a pitched battle against the Mexican military. That’s a war, a civil war. Feet from our border. That’s the country Joe Biden opened our border to. It’s insanity.

And yet somehow our Congress cannot be bothered to notice this, any of it, even as millions stream across. Murder victims in Houston, apparently don’t have influential social media accounts, so Kevin McCarthy doesn’t know that they exist. And that’s a shame because when he sees that on Tik Tok, he acts.

Here’s McCarthy demanding we send military equipment across the world to stop the invasion of another country:

And no one cares. So maybe we need our own Zelensky to get the world’s attention and stop the invasion of America. Who will that be?

And no one cares. So maybe we need our own Zelensky to get the world’s attention and stop the invasion of America. Who will that be?