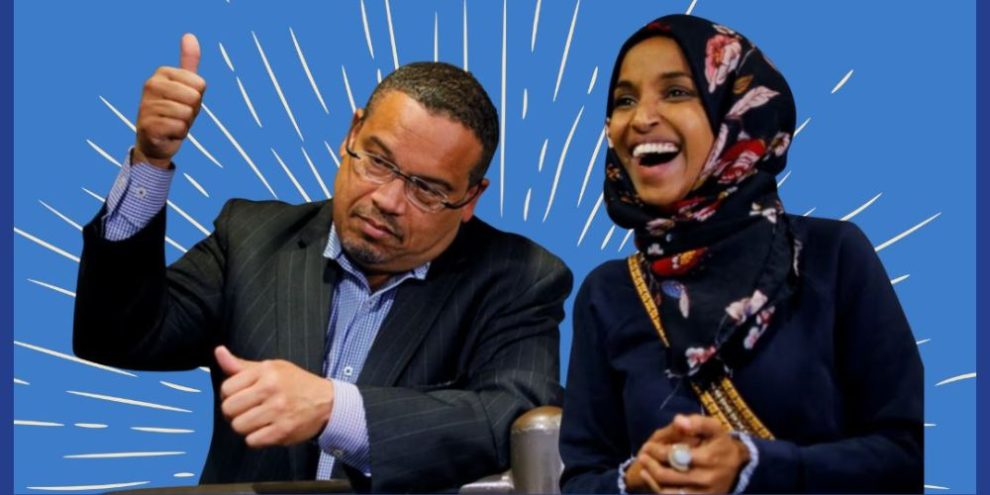 On Sunday, the “Squad” member posted on Twitter, “Keith, you will forever be my brother. You’re a champion for working people, a champion for people of color, a champion for every person who can’t afford to buy representation. That’s why you’re the People’s Lawyer. I’m proud to have your support.”

While he was a member of Congress, Ellison, supported the UN’s Goldstone Report, a one-sided attack on Israel following the 2009 Gaza war.

In December of 2010, an audio recording from a private fundraiser was released in which Ellison said that American foreign policy is “governed” by Israeli interests.

“Ilhan is a champion for the working class, a strong fighter for climate action, a fierce advocate for abortion rights, & one of the leading voices in Congress for canceling student debt. I'm proud to endorse her for reelection.”

Thank you @ewarren! Proud to fight alongside you! pic.twitter.com/4XSzhsYjyV

Following the comments going public, Haim Saban, an Israeli-American businessman and major Democratic Party donor slammed Ellison as “an anti-Semite and anti-Israel individual” whose election as chairman of the Democratic National Committee would be a “disaster” for the party’s relationship with Jews. The Anti-Defamation League called Ellison’s comments “deeply disturbing and disqualifying.”

In 2017, a profile of Ellison in Mother Jones cited sources claiming that Ellison was once a member of the antisemitic group the Nation of Islam, and clashed with Jewish students in law school at the University of Minnesota. Ellison claimed that though he worked with them he was never a member, and apologized for his involvement in the Nation of Islam before he became the first Muslim elected to Congress in 2006.

In response to the profile, Ellison wrote a two-page letter to the Jewish Community Relations Council of Minnesota and the Dakotas in May 2006 after winning the Democratic primary saying, “I have long since distanced myself from and rejected the Nation of Islam due to its propagation of bigoted and anti-Semitic statements and actions of the Nation of Islam, [its leader] Louis Farrakhan, and [Farrakhan’s late assistant] Khalid Muhammed.”

Omar herself has an extensive history of anti-Semitic statements and tropes as well as promoting conspiracy theories about Jews. In a now-deleted tweet, Omar wrote “Israel has hypnotized the world, may Allah awaken the people and help them see the evil doings of Israel. #Gaza#Palestine#Israel”

In 2021, 1,500 Orthodox rabbis called on Congress to rescind the appointment of Omar to vice chair of a House foreign affairs subcommittee based on her anti-Semitic statements and behavior.

In another now-deleted tweet, Omar said Jews were buying political support. “It’s all about the Benjamins baby.” According to the Daily Wire, in an interview earlier that year Omar suggested, “that Israel should not be allowed to exist as a Jewish state, Israel is not a democracy, and compared Israel to Iran — which is the world’s leading state sponsor of terrorism.” Omar also embraced the anti-Semitic heads of the Woman’s March such as Linda Sarsour.