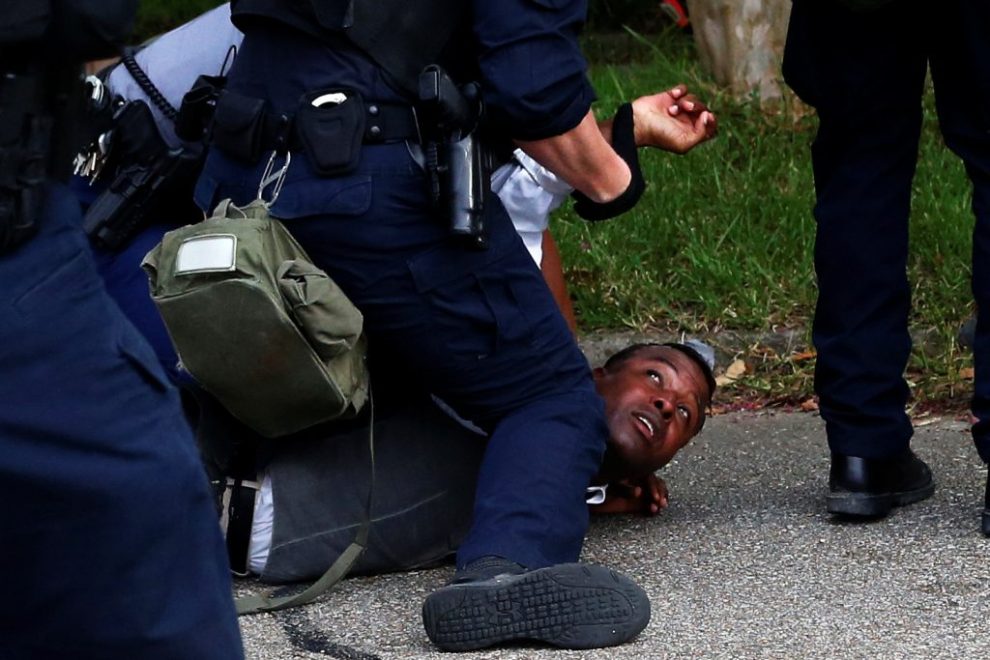 Black Lives Matter is dusting off its flags and signs and once again stopping traffic to honor the latest moron who chose to ignore the cops and got himself shot.

Patrick Lyoya, a black man, was pulled over because the car he was driving had the wrong license plate, which is frequently indicative of a stolen car. Lyoya ignored over a dozen police commands, including one telling him to get back in his car, stop resisting, and drop the police officer’s taser, which he had wrestled away from a Grand Rapids, Mich., policeman. At one point, the police officer was on top of Lyoya, who was on his hands and knees, wrestling for the taser. The policeman, who in the various videos sounds as though he is running out of energy to continue fighting, pulled his gun and shot Lyoya in the back of the head.

Like so many other black criminals who chose to fight the cops, Lyoya will be the next BLM “hero.” As per usual, BLM is now screaming that Lyoya didn’t “deserve to die” because of a wrong plate. That’s not why he died. He died because he, like so many other black “heroes,” resisted arrest, attacked a cop, and got shot in the process. He also took a cop’s weapon. What did he THINK was going to happen? He probably knew he’d be a hero to the far left. They’d riot in his name and paint murals of him nationwide. Why live in obscurity when you can die a legend?

We’ve all seen it again and again.

The Obamas, Oprah, and a host of other big wigs, black celebrities paid homage to career criminal George Floyd on the anniversary of his decision to resist arrest, resulting in his death.

Obama even tweeted the following: “George Floyd was murdered one year ago today. Since then, hundreds more Americans have died in encounters with police—parents, sons, daughters, friends taken from us far too soon. But the last year has also given us reasons to hope.”

George Floyd was murdered one year ago today. Since then, hundreds more Americans have died in encounters with police—parents, sons, daughters, friends taken from us far too soon. But the last year has also given us reasons to hope.

The “reasons to hope” include defunding police departments nationwide.

Maybe Obama should have suggested that black men stop committing crimes AND stop fighting cops when they get caught. But the left chooses to make heroes of their criminals. Why? Because it will inspire more black men to resist, fight, and die, and that’s all part of the plan.

I was able to locate two murals dedicated to Prince, one in his home state of Minnesota and one in New Zealand. George Floyd, a career criminal who once pointed a loaded gun at a pregnant woman’s belly to rob her, has them all over the country.

The left has no interest in teaching black men to obey the law and obey cops when they don’t. BLM sees these dead black men as an opportunity to make money AND to push their Marxist agenda. White liberals believe crime is, as Colin Flaherty, the now-deceased author of Don’t Make the Black Kids Angry and White Girl Bleed a Lot put it, the new black entitlement.

CRYSTAL-BALL-PREDICTION-O-RAMA! Patrick Loyoya will be in the news longer than black supremacist/mass shooter Frank James, who shot people on the NYC subway out of pure racial hatred.

We live in an era where black people have never been more prosperous, (at least they were when Trump was president). Two out of nine Supreme Court judges are black. Many police chiefs are black, though BLM chased some out of their jobs. Remember, they can’t scream “systemic police racism” if the police chief is black. Those chiefs have to go.

Ferguson, Mo., cop Darren Wilson was almost beaten unconscious by “gentle giant” Michael Brown before Wilson shot Brown to death. The violent left, again, claimed Brown didn’t “deserve to die” for walking in the middle of the street where Wilson saw him and told him to move to the sidewalk. The usual riots ensued and a commemorative plaque was hoisted for Brown. In other words, he is a hero for attacking a cop and dying in the process. Tell me again how black lives matter to the far left.

Rather than teach people not to poop where we walk, play, and live, the left thinks we should just make it OK to do so. Shouldn’t we be elevating black people to prosperity instead of making it legal for them to drop a crab cake on the street? #Equity

How many “Don’t resist” masks have you seen?

The message is clear: the left wants black men to resist arrest, and die, and for two reasons:

Those BLM mansions aren’t going to pay for themselves
George Soros knows a key to bringing communism to the U.S. is to have rampant crime. If you think Soros cares about black men, I’d like to sell you a very loud Chihuahua who, incidentally, poops shares of Twitter stock. I keep him in my neighbor’s yard.

Black men are the unwitting cannon fodder for the left, who pretend to defend them. The left pushes their “400 years of slavery” myth to keep black people angry at white people. They also propagate the delusion that cops are “hunting black men” to make sure that black men will continue to fight the cops and die. If, and when, black men stop resisting, and dying, BLM big-wigs will have to get jobs and Soros will have failed in his lifelong dream of bringing communism to the United States.