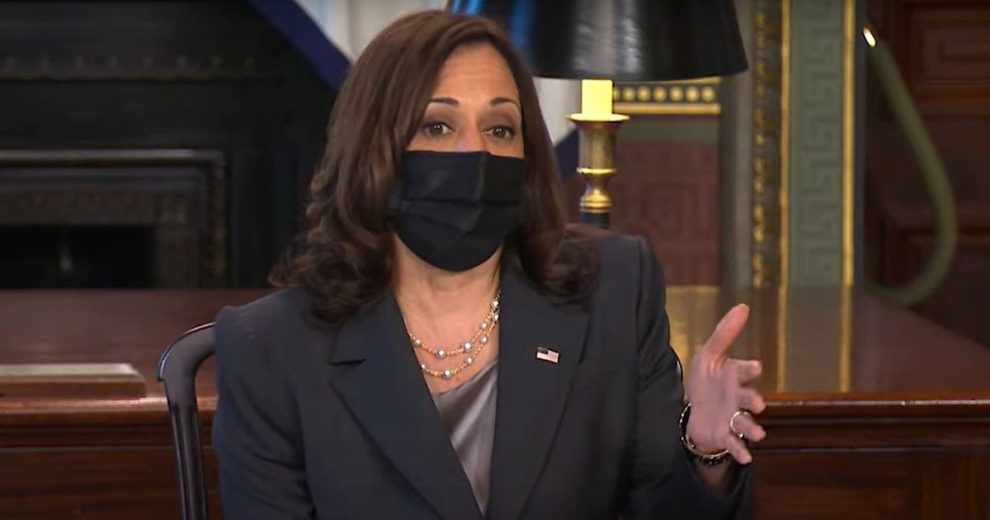 President Joe Biden has imposed a sweeping vaccine mandate, but one of the most cogent arguments against it has come from an unlikely source: Vice President Kamala Harris.

As part of the president’s ongoing COVID-19 response, Biden announced Thursday that the vaccine will soon be mandatory for workers at private-sector companies with at least 100 employees — a provision that experts estimate impacts some 80 million Americans.

Republicans and other freedom-loving people across the nation immediately erupted in outrage at such a government overreach, angry that this edict was imposed without regard to Americans’ constitutional rights to bodily autonomy.

And yet it was the vice president’s words from an appearance earlier that same day that made the case for allowing people to make medical decisions for themselves as the only way to preserve our democracy.

“When people are able to make choices without government interference for themselves — in terms of their well-being and the well-being of their family, in consultation with whomever they may choose — we are a stronger society,” she asserted.

Harris went on to stress that she has “been a strong advocate for … the right of a woman to make decisions about her own body and not to have anybody interfere with her ability and her right to make that decision.”

As encouraging as her message sounds in light of the vaccine mandate, those words ring hollow in the context of where she said them: Harris was hosting reproductive rights roundtable to discuss the new Texas law that bans abortions for unborn babies with heartbeats.

As with many of her like-minded abortion zealots, the vice president supports bodily autonomy and eschews government involvement in health care decisions only as they pertain to a mother’s right to kill her baby.

Their logic — if one can call it that — dictates that babies dependent on their mothers while in utero have no rights and deserve no legal protection whatsoever.

Any attempt to shield the unborn from those actively and willfully seeking to end their lives amounts to medical tyranny and a violation of women’s “reproductive rights.”

But that script gets completely flipped when it comes to imposing an experimental medical intervention on millions of Americans through coercion and threats.

“We’ve been patient, but our patience is wearing thin,” Biden scolded the vaccine-hesitant in his remarks Thursday. “And your refusal has cost all of us.”

The president argued that medical decisions should be taken out of individuals’ hands if those choices harm others — an argument that makes sense in the context of abortion.

Abortion is the only procedure that is considered successful when a baby’s dead body is delivered or when pieces of the corpse are successfully accounted for before being disposed of as medical waste.

The power to stop such a barbaric, brutal procedure is the clearest case where the government has the right to intervene in a particular medical decision as it is 100 percent fatal for at least one of the parties involved.

Still, Biden is using the full force of the federal government to stop a law designed to protect the smallest, most vulnerable Americans while simultaneously demanding millions of Americans get vaccinated.

Though it would appear Harris was throwing shade at Biden with her advocacy for a woman’s right to make her own medical decisions, the context reveals both the president and vice president have a misplaced idea of where individual rights end and government intervention begins.

Biden has crossed the Rubicon, now insisting that Americans accept the COVID-19 vaccine — a medical intervention whose long-term safety and medical benefits are unknown — in the most insidious and malicious use of governmental force in recent American history.

It used to be that people like Biden and Harris were all about “My body, my choice” because the slogan sounded like a reasonable argument when applied to the hidden horror of abortion.

Now they’ve moved on to “Get the shot, or else” to make sure no Americans have any say in what to do with their bodies as long as they can get away with it — everyone except those who wish to snuff out their unborn children, of course.