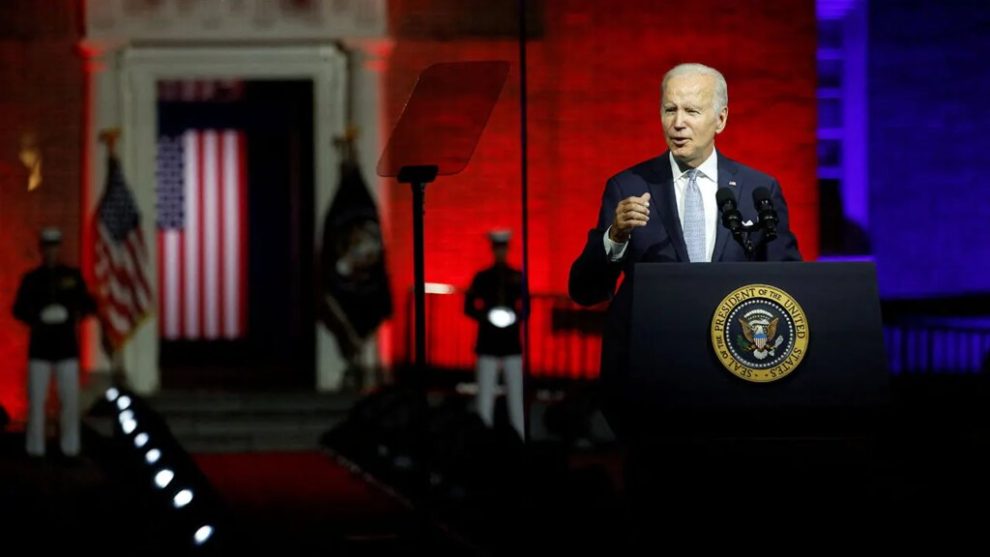 We now wait to see if any of the fact-checking and social media authorities call out CNN for altering news footage.

Here in the aftermath of Joe Biden’s bold, forceful, authoritative, badgering, hectoring, screeching, off-the-rails unPresidential speech on Thursday evening, there are a number of ways to see how poorly received this was. On content alone, this was quite the disturbing delivery, as we watched our president devolve into a hysteric, carping and complaining about Republicans and leveling accusatory hyperbole like we have not seen from the White House prior.

Another indicator that this thing jumped the trestle and plunged into a PR ravine is that the man once hailed by the media as The Great Uniter now needs this performance to be cleaned up by the media immediately following his display. As expected, the news net gabbing heads were all enthralled by this. Amusingly Aaron Rupar says Biden was “Challenging people to listen to their better angels,” after he clearly did not listen to this un-Cherubic rant. Then, most pathetic of all, Bidden staffer Rob Flaherty dared to suggest Biden’s speech was on par with one from George Washington.

It was so bad that the networks managed to depart from the post-game coverage in rather brisk fashion.

Sign of a failed speech: @FoxNews is covering Biden’s Sith Lord address wall-to-wall, while @CNN and @MSNBC are trying to ignore it now, changing the subject to Trump’s legal issues

Then there is CNN. In an astoundingly blatant case of rewriting history in real-time, the network offered its feed of the speech sporting a distinctive look, and the manipulation is astounding. One detail of tonight’s appearance that many were commenting on was that the administration officials were intent on presenting Biden in a dramatic, serious fashion. The staging was notable and rather arresting. (Maybe they pulled former ABC News producer James Goldston over for the task, as he is currently on a break from dressing up the January 6 Commission for primetime.)

After looking over the severity of these images let us take a moment and think back to a reaction from the press regarding Donald Trump. One day at 1600 Penn, he stepped outside for a media moment and removed his COVID mask for the press. Journalists dubbed this his “Mussolini Moment” – for making a daytime White House appearance. Note the lack of any similar move of casting Biden in a totalitarian light from them tonight.

This does not mean, however, that they did not pick up on it. The stark red lighting, Marines stationed for the cameras – it was a dire and venal display. Here is all we need to know the Independence Hall stagecraft in Philadelphia was a complete failure of optics – CNN worked to recast the scene – live.

The network’s live feed and on-screen replays completely altered the lighting effects. Here we have a (supposedly) major and serious news outlet manipulating the live video to show a calmer, magenta-hued lighting scheme, in order to cast Biden in a less severe setting.

President Biden: “I believe America is big enough for all of us to succeed, and that is the nation we’re building — a nation where no one is left behind.” https://t.co/f7ekw5GlKK pic.twitter.com/cfCBajagD7

This is both amazing and rather disturbing. While all other networks showed the harsh-hued backdrop in all of its oppressive glory, CNN – quite literally – opts to cast Joe in a kinder light. It appears that newly arrived CEO Chris Licht has a long way to go with his effort to move his news network closer to the political center.

While most of the country thought Biden looked like a totalitarian with the deep red lighting, @CNN tried to suggest that Joe is the President of T-Mobile. pic.twitter.com/GlCpvvPqIp