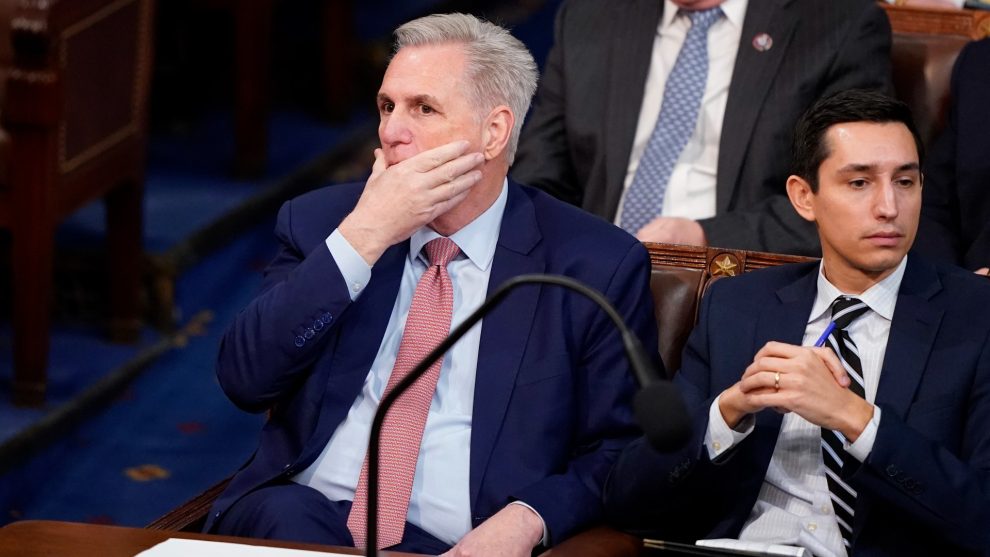 Rep. Pete Aguilar (D-CA), who nominated Hakeem Jeffries (D-NY) for the speakership position, told Punchbowl News Democrats would be open to working with Republicans to elect a speaker. The maneuver would have to satisfy some Democrats and many establishment Republicans.

“We would look at that, but I haven’t seen any proof that Republicans are willing to engage,” he stated.

On Tuesday, McCarthy was 16 votes shy of the threshold. Twenty GOP lawmakers, about 10 percent of the Republican House majority, opposed McCarthy.

Rep. Alexandria Ocasio-Cortez (D-NY) also floated the idea of a “unity government” Wednesday. Speaking with the Daily Beast, she said a “unity speaker” is not outside the realm of possibility but that if the idea came to fruition, McCarthy would not be the candidate Democrats would back.

She also stated Democrats would require Republicans to give concessions, such as potentially giving up committee seats to Democrats.

On MSNBC Tuesday evening, Ocasio-Cortez tried to drive a wedge between McCarthy and the 20 conservative holdouts.

“I do not believe that Kevin McCarthy has the votes. I believe that a lot of the opposition to him is very personal. I believe his leadership style is incompatible with a lot of Republican members and certainly the Democratic Caucus,” she said.

“So the question is, is there anyone in their caucus that can build that consensus? If there isn’t, McCarthy’s team may have to come to the Democratic Party? And, if that’s the case, then what would that even look like. It’s rather unprecedented? Could it result in a potential coalition government?” Ocasio-Cortez asked.

Rep. Marcy Kaptur (D-OH) was a third Democrat to float the idea on Wednesday. Speaking with Spectrum News, she stated an establishment candidate might be the best option.

“I wish I could be part of some kind of a unity caucus that would yield [McCarthy] the votes, because the Republicans hold a majority, and maybe put us in a special category,” she added.

"I've never seen him be a voice for Ohio…He operates theoretically, in space that doesn't yield anything for his district or anything for the state." pic.twitter.com/35UHSzeneb

Wednesday at noon the House is scheduled to convene for a fourth round of voting. The rounds of voting will continue until a lawmaker secures enough votes to meet the threshold.

If McCarthy’s detractors gang w/Dems to block a motion to adjourn, things could dicier for the GOP leader

McCarthy’s critics have suggest to @Olivia_Beavers that they’ve peeled off more votes against him. This means a vote showing him bleeding support — a problematic trend

There appears to be a chance that McCarthy will try to adjourn the House session before the fourth round of voting. Democrats could oppose adjournment, forcing a vast majority of Republicans to agree on leaving Congress for the day without a speaker.