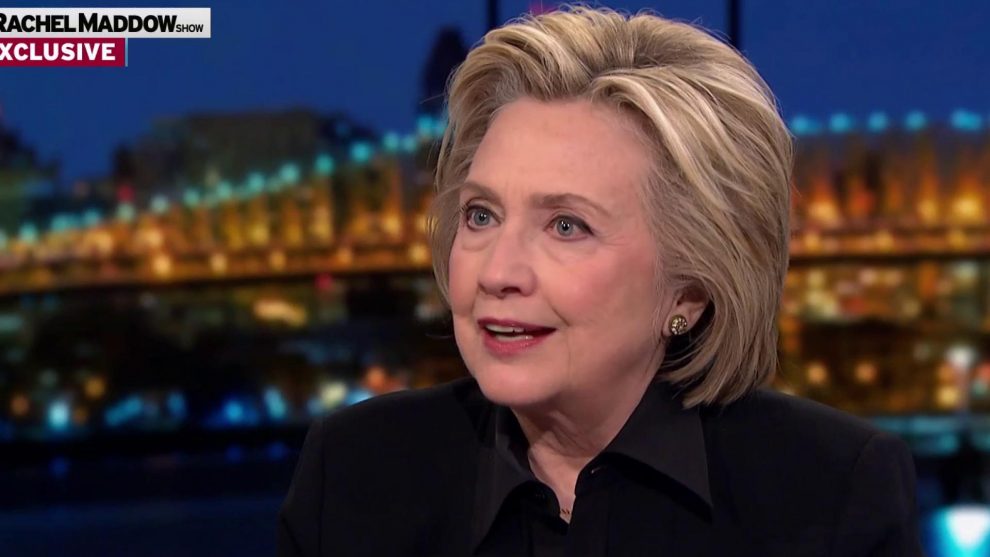 Hillary Clinton on Wednesday evening claimed she is living “rent-free” in President Donald Trump’s head because of Trump’s apparent obsession with investigating Clinton and her emails.

MSNBC host Rachel Maddow pointed out that Attorney General William Barr gave roundabout answers when asked if the White House had ever directed him to investigate specific investigations. She then asked Clinton about revelations in Special Counsel Robert Mueller’s report that Trump had asked former Attorney General Jeff Sessions to investigate Clinton and a recent New York Times story about how Trump reportedly asked former White House Counsel Don McGahn if he could get the Justice Department to investigate Clinton and former FBI Director James Comey.

Maddow said Clinton’s was the only opinion she wanted to hear on the issue.

“Well, what I make of it is this as big a sign of a guilty conscience or a real fear that you could possibly have. I mean, I’m living rent-free inside of Donald Trump’s brain, and it’s not a very nice place to be, I can tell you that,” Clinton said. “So, I don’t know what they’re talking about. I’ve been investigated repeatedly by the other side. And much to their dismay, but to my, you know, satisfaction, it’s been for naught. I testified for 11 hours in the Benghazi hearing after—what?— seven committees said there was nothing there.”

Clinton also ripped Sen. Lindsey Graham (R-SC) as an “absolute disgrace” for indicating that he wanted to investigate how former President Barack Obama’s Justice Department conducted its investigation of Clinton’s emails and servers.

“This is part of their whole technique to divert attention from what the real story is,” Clinton said. “The real story is the Russians interfered in our election and Trump committed obstruction of justice.”

Clinton: "I'm living rent free inside of Donald Trump's brain, and it's not a very nice place to be, I can tell you that." pic.twitter.com/Ieb2vyVKlL

Clinton continued: “It is very sad to me that the lies that were told about me, the accusations that were made about me, have unfortunately had some residue. People say well, you know, if she’s going to be investigated so much and they’re going to be saying all these terrible things even though nothing happens, maybe there’s something to it. Because I guess it is one of their tools to fire up their hard-core base. When in doubt, go after me.”

Clinton then insisted that “thankfully, you know, there’s no there and there never has been.”

“It is saddening to me, Rachel, that that is what is happening in our United States Senate and in the White House of this great country of ours,” Clinton said.