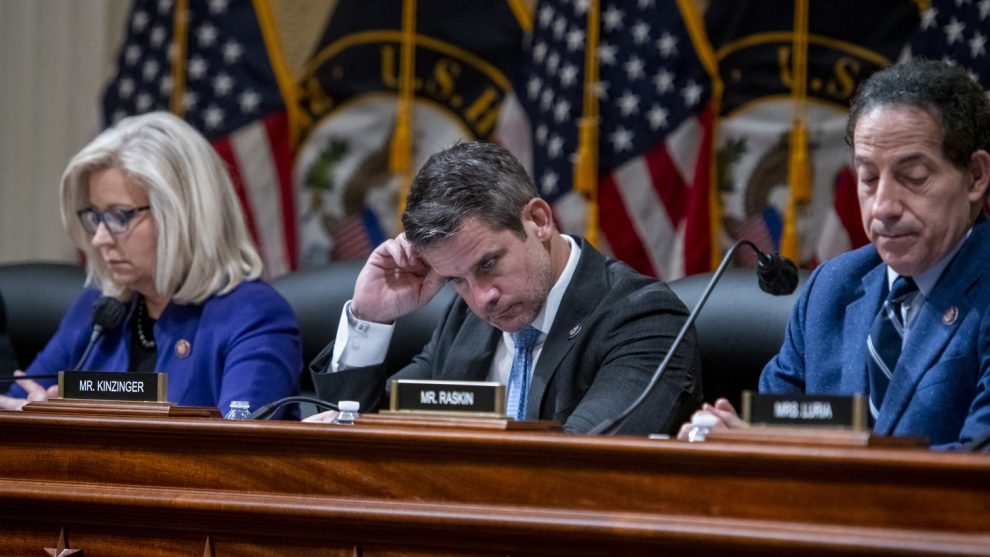 Joe Biden and the Democrats don’t want to have to talk about policies or any of the real issues afflicting the country right now. Because if they did, the focus would be on all their failures. That’s why they want the focus now to be on the Jan. 6 Committee and the show trial that they want to sell you.

Not only is it a show trial, it even has a producer, as my colleague Jeff Charles reported, like any TV drama — according to Axios, “James Goldston — former president of ABC News, and a documentary storyteller who ran ‘Good Morning America’ and ‘Nightline’ — has joined the committee as an unannounced adviser.”

A source told the news outlet that Goldston “is busily producing Thursday’s 8 p.m. ET hearing as if it were a blockbuster investigative special” and that he “plans to make it raw enough so that skeptical journalists will find the material fresh, and chew over the disclosures in future coverage.”

But even though they’re engaging in all this effort and they’ve spent a ton of money on the Committee (yes, we’re paying for the Democrats to try to make a political hit on Republicans), what’s hilarious is they’re scaling back expectations. While some Democrats have tried to suggest that there might be big revelations, the Committee is now seeking to “temper expectations” as to what revelations there might be on Thursday, claiming a lot of it is what has already been reported. Translation? They have nothing after millions spent in their exercise to demonize their political opponents.

You can’t build up expectations that your Jan 6 hearing is going to be a BLOCKBUSTER with all sorts of new info… then come out a few hours before it starts with “actually we’re just connecting dots of what’s already out there.” https://t.co/JZgkxyOZI2

Too late, they’ve whipped it up like a Mueller 2.0 and it will deliver as much — which is to say nothing. Democrats better prepare to be disappointed, yet again.

Then they admit what it’s all about — it’s nothing new, “But our aim is to tie that all together in a comprehensive narrative.”

Wait a minute. What about blowing the roof off? From WP: 'Committee aides sought to temper expectations of any shocking revelations during Thursday’s hearing and instead framed the session as an opening argument.' https://t.co/xrNwdsnUKW pic.twitter.com/v0YVFlCrrr

There it is, there’s that word — it’s all about the “narrative.” It’s a performance, a made-for-TV production, that’s why they need the TV guy. They don’t want you to evaluate the facts for yourself, they must tell you what it means, so you accept their narrative. Hey, Democrats, this is America, the government doesn’t dictate what people believe here.

How much of a performance drama is it? They have teleprompters for their speeches.

The Jan 6 set up is so pathetic. The members have teleprompters?

In a comment about a tweet from President Donald Trump on Jan. 6, Rep. Liz Cheney (RINO-WY) gave an example of the spin and the deception that the Committee is going to throw out there. She read only part of a tweet and left out the critical part to deceive people, as well as leaving out other things that Trump said and did on that day.

Liz Cheney reads a Trump tweet from 1/6, but neglects to finish reading the tweet which reads "Go home with love & in peace." pic.twitter.com/zdfW8gNGba

She claims he justified it and said they were “doing what they should be doing.” But Trump’s own words from that day contradict her.

Compare Trump's "peacefully and patriotically" to Schumer's "You will pay the price!"

One of these statements resulted in impeachment, and the other, crickets. pic.twitter.com/AGNXSUkV5V

They are nothing if not hypocritical.

Trump also said this that afternoon.

It’s a very tough period of time. There’s never been a time like this where such a thing happened where they could take it away from all of us — from me, from you, from our country. This was a fraudulent election, but we can’t play into the hands of these people. We have to have peace. So go home. We love you. You’re very special. You’ve seen what happens. You see the way others are treated that are so bad and so evil.

I know how you feel, but go home, and go home in peace.

So no, he wasn’t “justifying” it or saying they were doing the right thing, he was saying there had to be peace. But that doesn’t fit the narrative, so Cheney just left it out and spun the rest.

We can’t expect much from this partisan television drama, including honesty.

Schiff to @wolfblitzer: "Well, these hearings are not aimed at the midterms or at the next presidential election. These are aimed at trying to protect our democracy from anyone who poses a threat to it."

Anyone who believes that, I have a bridge in Brooklyn to sell you.