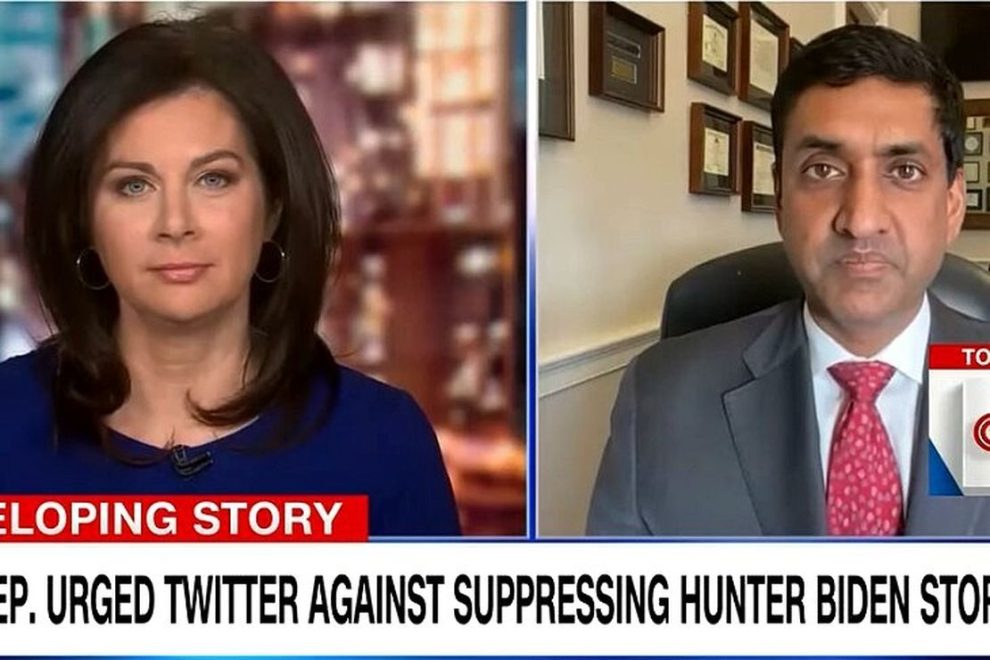 They say politics makes some strange bedfellows sometimes, and that was definitely the case for me while watching a clip from CNN’s “Outfront” program Monday where Rep. Ro Khanna (D-Calif.) was interviewed by anchor Erin Burnett on Twitter CEO Elon Musk’s release of the first set of “Twitter Files” last Friday (complete thread from independent journalist Matt Taibbi here) and the fallout from it.

If you’ll recall, amidst the illuminating information contained in the emails was one in particular from Khanna in which he stood up for free speech and expressed his belief that Twitter deliberately suppressing the New York Post’s blockbuster Hunter Biden laptop story in October 2020 was wrong from a First Amendment standpoint.

For those who missed the email, check it out below:

32.Khanna tries to reroute the conversation to the First Amendment, mention of which is generally hard to find in the files: pic.twitter.com/Tq6l7VMuQL

According to Taibbi, Khanna was the only Democratic lawmaker he saw in the treasure trove of information who took this stance. The others, well, they responded accordingly – and disturbingly – in agreement with Twitter’s position.

During his interview on CNN Monday, Khanna stood behind his comments and said the “liberal Democrat” position “should be for the principle of standing up for First Amendment speech”:

REP. RO KHANNA (D-CA): Erin, what surprised me is that Twitter made the decision in the first place to censor. Look, liberal Democrats should be for the principle of standing up for First Amendment speech. And “New York Times’” Sullivan said: we want speech to be open, uninhibited, wide ranging.

I get Twitter’s a private actor, but they’re effectively a modern public square. And it was disappointing to me that they were suppressing “The New York Post”.

BURNETT: And based on the communications that we have that were released, you are the only Democratic lawmaker who said that. You spoke up. You told Twitter to be considerate. You said you didn’t think it was right. You stood up for the First Amendment. Your email was thoughtful and definitive. Are you disappointed that you’re the only one?

KHANNA: Well, I mean, look, we’ve all written emails, and I’m glad that they released that one. I’m sure I’ve written things that aren’t as thoughtful.

But when I read it, I said, I stand by every word. I mean, I got into politics partly because I believe American democracy is great where we have everyone have a voice to stand up and participate in speech. And I do hope more Democrats will stand up for the broader principle, which is, we want to be — have forums that don’t have censorship, that allow for all perspectives.

The interview was surprisingly thorough, with Burnett seeming to be in agreement with the free speech principle while asking meaningful questions along the way, something that has been in short supply on CNN over the years.

We should all be standing up for First Amendment speech. Twitter is effectively a modern public square. pic.twitter.com/A97u4KzFFh

Unfortunately not many Democrats agree with Khanna when it comes to free speech and open dialogue, which was one reason why it was important for the Twitter files to be released because they showed that behind closed doors when no one was looking, Khanna said the right things to the Twitter higher-ups. As the old saying goes, you can tell the true measure of a person based on what they’re saying and doing when they think no one is looking.

A refreshing thing to see on the left, but it’s also the type of thing that is, sadly, pretty close to extinct among modern Democrats for who canceling people for WrongThink has increasingly become the way of things. Safe to say there will be little to nothing conservatives agree with regarding Khanna’s stances on other issues, but on this vitally important one, he definitely made the right call.

Hell did indeed freeze over Monday on CNN – if only for a few brief moments, something that was long overdue.