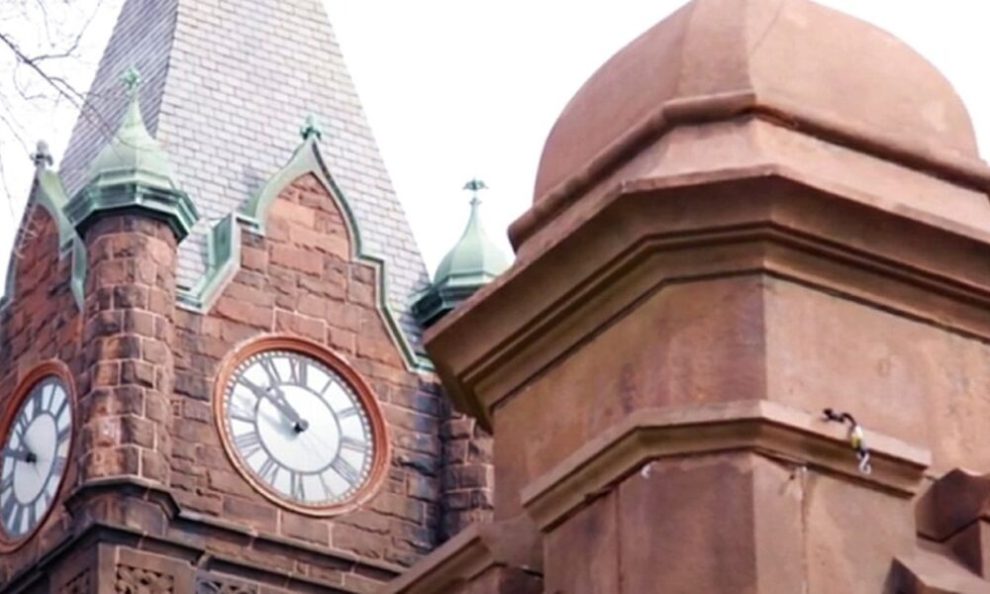 What’s worse than paying $60,000 a year to send your child to a woke college so they can be brainwashed into hating men and America? Having to spend three hundred bucks a day to get her “deprogrammed” and brought back to reality.

That’s what faced Melinda Rockwell, who sent her pharmaceutical heiress daughter Annabella to women’s college Mount Holyoke in rural Massachusetts only to see her come back completely “indoctrinated.” Melinda barely recognized the daughter she had raised, telling the New York Post:

“She was no longer the Annabella I’d known all her life. This girl was the most bubbly breath of fresh air to everyone. She lit up a room. But the light was stolen from her at that school. It was extinguished. It was no different than if she’d been taken away by the Moonies or the Children of God.

Mount Holyoke grad deprogrammed from women-only woke culture. Annabella Rockwell said she was "brainwashed" into believing the world was a toxic patriarchy while at Mount Holyoke, a women's only college in Massachusetts. https://t.co/EWBEPvJvDX via @nypost

Melinda was so distraught by her daughter’s new outlook that she admits to once throwing a vase through a window in frustration. Annabella describes her “educational” experience:

I left school very anxious, very nervous, very depressed and sad. I saw everything through the lens of oppression and bias and victimhood. I came to the school as someone who saw everyone equally. I left looking for injustice wherever I could and automatically assuming that all White men were sexist. My thoughts were no longer my own.

Here’s the kind of thing she learned about at school:

Mount Holyoke announces the soft launch of the new Pronouns Policy, as well as a scholarship in honor of Native and Indigenous communities: https://t.co/oJBAksREAW#TransAwarenessMonth #TransAwarenessWeek #IndigenousHeritageMonth #NativeAmericanHeritageMonth

After Annabella’s graduation, Melinda resorted to hiring a $300-a-day deprogrammer in an attempt to undo the damage. Annabella began to question some of the teachings about the evil patriarchy and the anti-male stance she says she’d encountered at the college. She also thought back on the culture her freshman year when she felt there was a pressure to shrug off gender roles; one student ritual called for cutting off one’s hair into the “MoHo chop.” (Annabella declined to do this.)

It wasn’t until the 2020 Black Lives Matter riots, though, that she came to fully realize she’d become radicalized:

“My social media feed was an echo chamber of everything I’d been taught at Mt. Holyoke,” Rockwell said. “Everyone had the black square and it was all ‘no justice, no peace.’ But I was starting to think to myself, ‘Why are we burning down businesses in the name of empowerment? How is this helping black people? It just doesn’t make sense.’ It just began to click in that moment about how hypocritical it was.”

She also credits her mother’s “relentlessness” in helping her realize that she’d fallen into a mindless cult. Ironically, Annabella now works as a fundraiser for PragerU. She doesn’t want to shame her former classmates though:

I don’t want to smear them. They were young and impressionable. It wasn’t fair to anyone that there was so space for discourse. While I was there the school preached all the time about how diverse it was. But diversity of opinion was never allowed. [Emphasis mine.]

The school makes no secret of its activism, saying in a mission statement on their YouTube page:

At Mount Holyoke, the first of the powerful Seven Sisters colleges, social activism is in our DNA. Which is to say that we have long been committed to access and social justice, and to the belief that women of strength and conviction give rise to a better world for all.

Many readers are probably wondering, if you saw that mission statement, why would you ever send your kid to that school? The answer unfortunately is that most major colleges now feature extremely woke mission statements, and unless you send your child to Hillsdale or the like, they’re going to get a healthy dose of progressive ideology. Conservatives have lost higher education to woke administrators and professors, and we must fight back.

Today’s colleges and universities will embrace all people regardless of color, sexual orientation or identification, and some religions (as long as they’re not Christian), but the one thing they will not tolerate: conservative viewpoints.