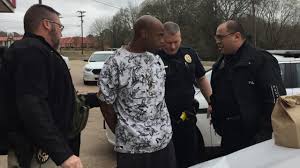 Police in Palestine, Texas say they’ve arrested the man who bound two women with duct tape, poured lighter fluid on them and burned one of them inside a convenience store during a Thursday morning robbery.

Robert Thompson, 40, has been charged with aggravated assault with a deadly weapon and aggravated robbery, according to a Palestine Police Department news release. Police believe he held up the cashier of the Pit Stop corner store and one customer at gunpoint, around 10 a.m. Thursday, Chief Andy Harvey said during a news conference.

“If you can believe that,” Harvey said. “It’s hard to describe watching it on video.”

The owner of the store, Muhammad Khan, released the surveillance video to KETK. It shows a man in a white coat with a fuzzy hood bind the cashier, then a customer.

See also  CRT Symposium Speaker Calls Diversity of Thought 'White Supremacist' Excrement
→ What are your thoughts? ←
Scroll down to leave a comment: