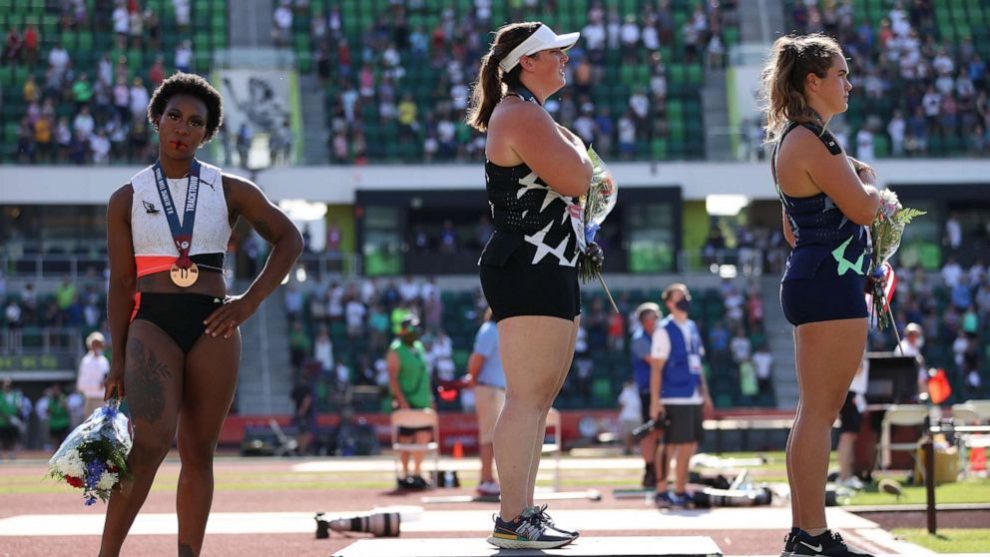 Gwen Berry, a U.S. Olympic hammer thrower who came under fire for her demonstration during the national anthem at track and field trials dismissed assertions she hates the country she represents.

Berry finished in third place at the trials and made the team set to head to Tokyo next month for the coronavirus-delayed Olympic Games. But she drew negative attention when she turned away from the flag as the national anthem blared and later would cover her face with a shirt that read “Activist Athlete.”

Amid scrutiny and boisterous claims she shouldn’t be representing the U.S. in the Games, Berry fired back in an interview with the Black News Channel on Tuesday.

“I never said that I didn’t want to go to the Olympic Games, that’s why I competed and got third and made the team,” Berry said.

“I never said that I hated the country. I never said that. All I said was I respect my people enough to not stand for or acknowledge something that disrespects them. I love my people. Point blank, period.”

Berry said she specifically has an issue with a line in “The Star-Spangled Banner,” which she says alludes to catching and beating slaves.

The third stanza of the song reads: “And where is that band who so vauntingly swore, That the havoc of war and the battle’s confusion. A home and a Country should leave us no more? Their blood has wash’d out their foul footstep’s pollution. No refuge could save the hireling and slave. From the terror of flight or the gloom of the grave, And the star-spangled banner in triumph doth wave. O’er the land of the free and the home of the brave.”

Berry said: “If you know your history, you know the full song of the national anthem, the third paragraph speaks to slaves in America, our blood being slain…all over the floor. It’s disrespectful and it does not speak for Black Americans. It’s obvious. There’s no question.”

According to Stevenson University, a debate has raged about the meaning of the line “hireling and slave” and whether it flatly has racist tones or a “rhetorical tool.”

It’s not the first time Berry has protested during Team USA events.

Earlier in the week, she raised a fist in protest before one event. She also raised a fist during the national anthem after winning gold in the 2019 Pan American Games.