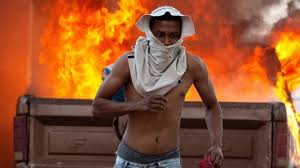 International pressure mounted against Venezuela’s leader Nicolas Maduro on Sunday, with Washington vowing to “take action” after opposition efforts to bring humanitarian aid into the country descended into bloody chaos.

Self-declared interim president Juan Guaido called on the international community to consider “all measures to free” Venezuela after clashes at the border crossing left at least two people dead.

Guaido announced he would participate in Monday’s Lima Group meeting of mostly Latin American countries in Bogota, and called on the international community to be prepared for “all possibilities” regarding Maduro. US Vice President Mike Pence will represent Washington at the meeting.

Secretary of State Mike Pompeo said the United States “will take action” as he condemned violence perpetrated by Maduro’s “thugs.” President Donald Trump has said that Washington is not ruling out armed action.