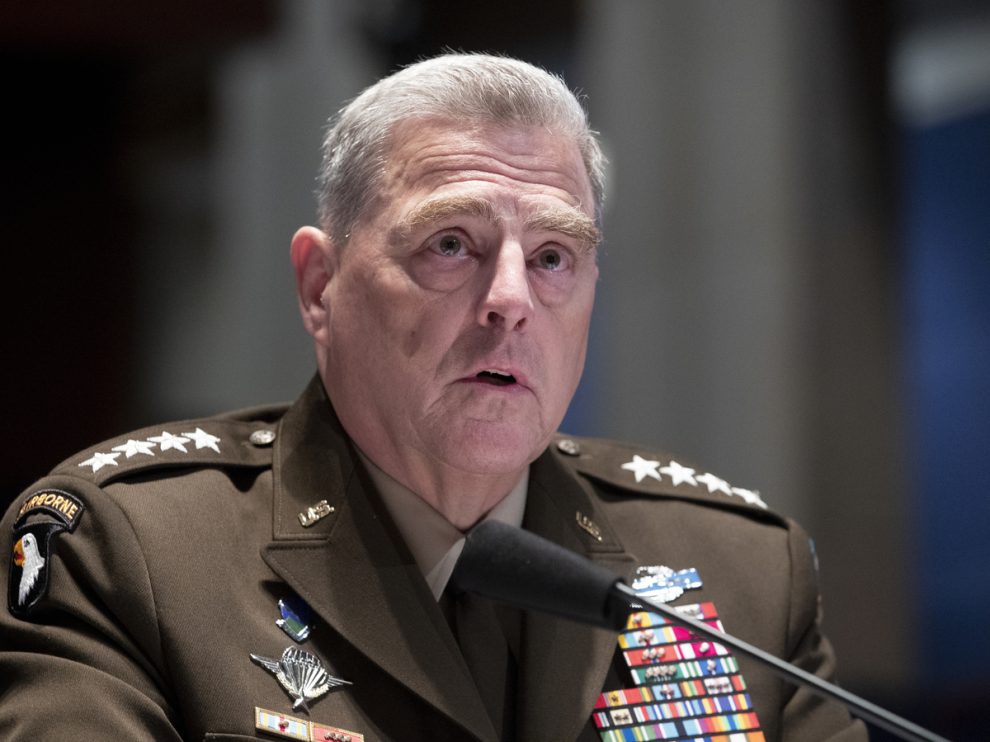 Sen. Chuck Grassley (R-IA) and Rep. Jim Banks (R-IN) called on Chairman of the Joint Chiefs of Staff Gen. Mark Milley to honor his word and stop dodging questions about allegations in Bob Woodward and Robert Costa’s book Peril that he usurped President Donald Trump’s power as commander in chief after the Capitol riot on January 6, 2021, in violation of the law.

Grassley and Banks both spoke Thursday on the floors of the Senate and House respectively to remind Milley he told members of Congress he would review the allegations in the book and get back to them to say if they are true. Despite repeated requests, he has still not said if they are true.

“Milley allegedly placed military hands — his hands — on controls that belonged exclusively to the president. According to Peril, [he] summoned senior operation officers in the military command center to his office,” Grassley said, adding, “He had them take ‘an oath’ not to ‘act’ on the president’s orders without checking with him first,” Grassley said.

These brazen words and actions, if accurate, strike at the heart of our democracy — civilian control of the military. They turn this guiding rule upside down and show utter contempt for the commander-in-chief coming from the nation’s top general. They are dangerous and contrary to military code 10 US Code 888.

Grassley said Milley assured him in a letter that his actions were on the “up and up” and promised to read the book and report back to Congress. He said he joined Sens. Rand Paul (R-KY) and Marsha Blackburn (R-TN) in a letter pushing for a straight answer. “Nine months later, he’s still dodging the question with the same lame excuse,” Grassley said.

Grassley said when nothing came, he began sending handwritten notes to Milley. He said he received a ten-page letter from Milley that ignored his questions. He went on to say a later email said their letter did not raise a direct question. “I think I can legitimately ask, ‘Is that Pentagon baloney, or what is it?’” Grassley said.

“After my third note, Gen. Milley responded with the same old smoke and mirrors routine: ‘I have never read the books.’ Years of oversight have taught me this lesson. Evasive answers usually offer revealing clues about the truth,” he said, then added:

I think Gen. Milley knows better. He knows the score. If those books and all attendant press coverage of those books had contained gross misrepresentations, we would have heard about it a long time ago. He would have been hammered by the authors and corrected the record. However, to date, not a peep from the general. His silence speaks volumes. Something doesn’t smell just right. As a Pentagon watchdog, when I get a whiff of wrongdoing, I sink in my teeth and don’t let go.

So Congressman Jim Banks, a member of the House Armed Services Committee, and I upped the ante on April the 11th with 12 pointed questions. We gave Gen. Milley a second bite at the apple to clear the air. Now, two and a half months later, we still have no response. Gen. Milley, you said you were going to answer for Sen. Blackburn’s question. Honor your word and so the questions come clean with the American people. We are all ears.

Banks said in his statement on the floor:

Our Constitution is clear: the president is the commander-in-chief. Sidestepping the president and violating the chain of command is a grave crime.

According to Bob Woodward’s book Peril, Gen. Mark Milley directed senior military officers NOT to follow the president’s orders, unless Gen. Milley approved them first. When I asked Gen. Milley about Peril at an Armed Services hearing, he claimed he hadn’t READ it. Convenient. So Sen. Chuck Grassley and I sent a letter to Gen. Milley, asking him to verify or refute the books’ claims.

He hasn’t responded. I am calling on Gen. Milley to set the record straight. Gen. Milley is accused of secretly SEIZING the president’s military powers. That is the most serious crime. If he is innocent, he has a duty to say so.

According to Peril, Milley was worried that Trump could “go rogue,” and he called a secret meeting on January 8 with senior military leaders. During that meeting, Milley instructed senior military officials in charge of the National Military Command Center not to take orders from anyone unless he was involved.

“No matter what you are told, you do the procedure. You do the process. And I’m part of that procedure,” Milley told them, Woodward and Costa wrote. “Milley considered it an oath.”

The book also revealed that Milley had two back-channel phone calls with China’s top general to reassure him that the U.S. would not attack, even promising to give him a heads-up if it did. According to a writeup by the Washington Post, Milley — four days before the 2020 presidential election — assured his Chinese counterpart, Gen. Li Zuocheng of the People’s Liberation Army, that the U.S. would not strike.

“General Li, I want to assure you that the American government is stable and everything is going to be okay,” Milley allegedly said. “We are not going to attack or conduct any kinetic operations against you.”

Milley even pledged to alert Li in the event of a U.S. attack. “General Li, you and I have known each other for now five years. If we’re going to attack, I’m going to call you ahead of time. It’s not going to be a surprise,” he said, according to the book.

In his second call on January 8, 2021, Milley promised Li, “We are 100 percent steady. Everything’s fine. But democracy can be sloppy sometimes.” Milley did not tell Trump about the call, according to the book.

Also according to the book, after House Speaker Nancy Pelosi called him and pressed him to secure the country’s nuclear weapons and called Trump “crazy,” Milley told her, “I agree with you on everything.”

Woodward and Costa wrote that after the call with Pelosi, Milley “decided he had to act” and told the military service chiefs and then-CIA director to watch everything “all the time.”

They wrote, “Milley was overseeing the mobilization of America’s national security state without the knowledge of the American people or the rest of the world.”

“Some might contend that Milley had overstepped his authority and taken extraordinary power for himself,” they wrote but said the chairman believed his actions were “a good faith precaution to ensure there was no historic rupture in the international order, no accidental war with China or others, and no use of nuclear weapons,” as Milley “felt no absolute certainty that the military could control or trust Trump.”

Milley also allegedly discovered Trump had signed a military order to withdraw all troops from Afghanistan by January 15, 2021, and considered it an “end run” around the president’s military advisers.