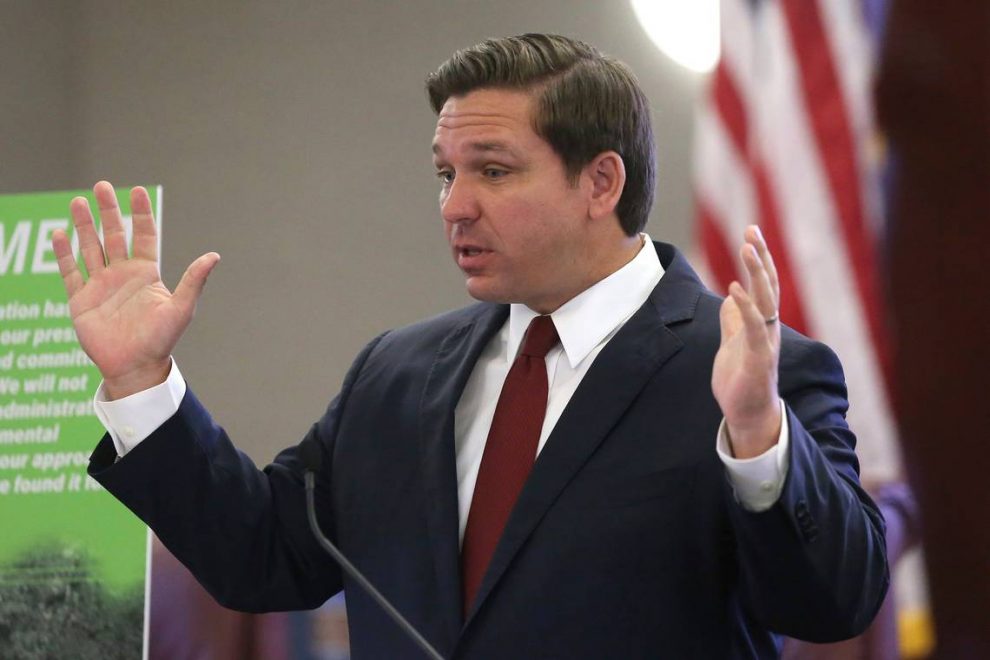 Florida Gov. Ron DeSantis has hung signs on all the major interstate highways entering Florida informing everyone traveling by road into the state that the Sunshine State has implemented E-Verify, a background check system for employers to see if prospective hires are in fact legally authorized to work in the United States.

The signs, DeSantis’s office told Breitbart News, are now visible on all three main interstate gateways into Florida along I-10, I-95, and I-75. The signs come after Florida’s legislature last year passed E-Verify measures which DeSantis signed into law last summer.

“I want all residents and visitors to receive this message: Florida Uses E-Verify,” DeSantis told Breitbart News exclusively. “For years prior to my administration, attempts to pass E-Verify legislation in Florida failed, but I would not yield until this matter was addressed. Last year, I was able to deliver on working with the Florida Legislature to get E-Verify over the finish line and signed SB 664 into law. Requiring use of an employment verification system not only places upward pressure [on] Floridians’ wages, it also protects the public safety. Assuring a legal workforce through E-Verify is crucial to upholding the rule of law and deters illegal immigration into Florida, which is more important than ever given the border crisis.”

DeSantis, whose popularity has been surging due to his handling of the coronavirus pandemic much more effectively than many Democrat governors in the northeast, with no mandates or restrictions, also noted that President Joe Biden’s handling of immigration has “been abysmal” and hurts all states, including Florida.

“The Biden Administration has been abysmal on immigration and their policies threaten to turn all states, including Florida, into border states,” DeSantis said. “Under this administration, it’s very clear we must enforce our laws and protect our residents.”

The Department of Homeland Security (DHS) makes E-Verify available to every U.S. state and territory, but not all states require it or use it. Technically, from a federal perspective, E-Verify is currently voluntary, according to the program’s website.

E-Verify is a web-based system that allows enrolled employers to confirm the eligibility of their employees to work in the United States. E-Verify employers verify the identity and employment eligibility of newly hired employees by electronically matching information provided by employees on the Form I-9, Employment Eligibility Verification, against records available to the Social Security Administration (SSA) and the Department of Homeland Security (DHS). E-Verify is a voluntary program. However, employers with federal contracts or subcontracts that contain the Federal Acquisition Regulation (FAR) E-Verify clause are required to enroll in E-Verify as a condition of federal contracting. Employers may also be required to participate in E-Verify if their states have legislation mandating the use of E-Verify, such as a condition of business licensing. Finally, in some instances employers may be required to participate in E-Verify as a result of a legal ruling. E-Verify, which is available in all 50 states, the District of Columbia, Puerto Rico, Guam, the U.S. Virgin Islands, and Commonwealth of Northern Mariana Islands, is currently the best means available to electronically confirm employment eligibility.

Florida’s new law makes it mandatory in the Sunshine State for employers, both public and private, to use E-Verify when hiring someone.

According to a January analysis published by the Orlando law firm Littler Mendelson, Florida’s new E-Verify law affects all employers in the state. For public employers—defined as “an entity within state, regional, county, local, or municipal government, whether executive, judicial, or legislative, or any public school, community college, or state university that employs persons who perform labor or services for that employer in exchange for salary, wages, or other remuneration or that enters or attempts to enter into a contract with a contractor”—they must register with and use E-Verify for all new hires.

“No public contract may be entered into unless each party to the contract registers with and uses the E-Verify system,” the analysis reads.

The analysis adds that for public employers, use of subcontractors requires signed affidavits confirming that all of the workforce are legally authorized to work in the United States.

The new law also affects private employers, who according to the Littler Mendelson analysis of the law must:

…after making an offer of employment that has been accepted by a person, verify the person’s employment eligibility by either using the E-Verify system or requiring the person to provide the same documentation that is required by the U.S. Citizenship and Immigration Services (USCIS) on its Employment Eligibility Verification (I-9) form.

Any private employers who go the I-9 USCIS documentation route must, per the law, maintain those records for at least three years after initially employing someone. The Littler Mendelson analysis notes that a private employer is described as any “person or entity that transacts business in this state, has a license issued by an agency, and employs persons to perform labor or services in this state in exchange for salary, wages, or other remuneration” and that there is no minimum threshold of employees that triggers the E-Verify requirements—meaning they are universal and anyone employing someone in the state of Florida must use E-Verify.