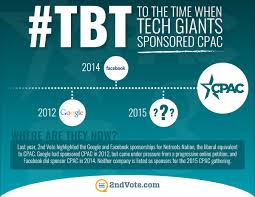 Google sponsored 2018’s CPAC in the hopes of exerting influence over the Republican Party platform on immigration, according to a recording of a company executive.

“Big tech knows a lot about you—in some cases, more than you know about yourself. They certainly know where you go and what you eat, and maybe even know what you think. The only thing it can’t control is what your thoughts are but they are working on that, too,” Carlson began.  (RELATED: Google Search Labels Republican Women ‘Enablers’)

He continued, “In a 2018 phone recording obtained exclusively by this show, Adam Kovacevich—he’s Google’s head of U.S. public policy—explains to Google employees why the company was a sponsor for CPAC that year. Google sponsored CPAC, he says, because it wouldn’t let them push the party toward a more open borders agenda. Listen.”