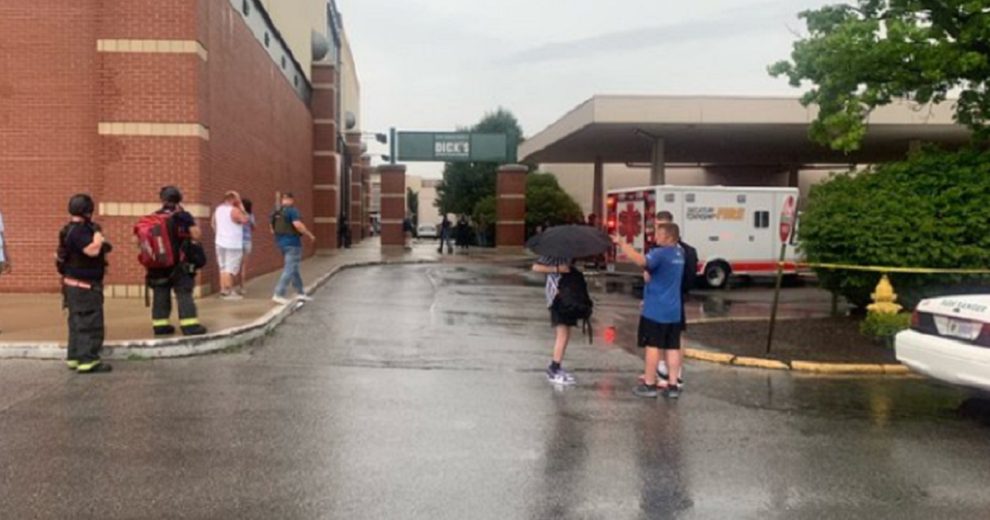 When gunfire broke out Sunday at a mall in Greenwood, Indiana, the city in suburban Indianapolis came within a hair’s breadth of joining a tragic list of cities that includes Uvalde, Texas, Highland Park, Illinois, and Buffalo, New York.

It won’t though, despite a gunman murdering three in the attack. That’s because another man in the mall legally carrying a firearm shot the killer dead before he could commit more carnage.

According to Fox News, Greenwood Police Chief James Ison is praising “a good Samaritan with a handgun” for stopping and killing the shooter at the Greenwood Park Mall.

According to The Wall Street Journal, the shooter, still unidentified, entered the mall and opened fire in the food court; he had a rifle and several magazines of ammunition.

CONFIRMED INFORMATION FROM POLICE ON THE INCIDENT AT GREENWOOD PARK MALL:

We are waiting to get more information from police on scene. pic.twitter.com/HEZcRqDH0g

Three victims died. Two of those shot were being “treated in area hospitals,” according to Fox.

However, this could have been a lot worse if it weren’t for a 22-year-old Bartholomew County man who was carrying a handgun.

“The real hero of the day is the citizen that was lawfully carrying a firearm in that food court and was able to stop the shooter almost as soon as he began,” Ison said, according to ABC News.

WXIN-TV reported the “good Samaritan” was fully cooperating with police.

“Someone we are calling the ‘Good Samaritan’ was able to shoot the assailant and stop further bloodshed,” Greenwood Mayor Mark W. Myers wrote in a post on Facebook, The Wall Street Journal reported.

“This person saved lives tonight. On behalf of the City of Greenwood, I am grateful for his quick action and heroism.”

Now, three innocent victims dead at the hands of a murderer is nothing to scoff at. However, consider the other shootings this summer and the number of victims involved:

At this point, the cowardly temporizing of the Uvalde, Texas police has been well-documented to the point of exhaustion. In the wake of the shooting, Democrats wouldn’t even dream of touching any kind of legislation that involved allowing trained teachers to concealed carry inside classrooms, however, even after seeing law enforcement refusing to do its job.

What would have happened if an armed teacher had been inside a classroom shooter Salvador Ramos targeted? Or would he have targeted the school at all if the mere presence of armed teachers served as a deterrent?

As for Buffalo, the alleged shooter’s manifesto made it clear he chose the supermarket, in part, because of the lax security at the store and the strict gun laws of New York state.

In the manifesto, alleged shooter Payton Gendron laid out what he called his “[s]trategies for success.”

Among them? “To maximize deaths of the intended target, attack in a high density, highly populated area. … To minimize the chance of instant death from a CCW [carrying a concealed weapon] holder, police, or general armed citizen, body armor and ballistic helmet that will stop the intended threat will be needed.

“Attacking in a weapon-restricted area may decrease the chance of civilian backlash. Schools, courts, or areas where CCW are outlawed or prohibited may be good areas of attack. Areas where CCW permits are low may also fit in this category. Areas with strict gun laws are also great places of attack,” he continued.

And yet, what were the ghoulish memes being posted by Twitter leftists in the wake of Sunday’s events? Here’s one:

Grim, reductionist, hyperbolic and odious though this political cartoon may be, it makes an accurate point — just not the intended one.

Of all the strategies the left wants to try — demonizing and banning weapons based on how they look or on wholly random characteristics deemed to make a gun an “assault weapon,” passing “red flag” laws that take firearms away from individuals without due process, or virtually anything to chip away at the constitutional right to bear arms — the one they remain dead set against is the one that stopped a bloodbath at a shopping mall on Sunday.

If this is the case leftists want to make to the American people, go ahead. Let them know why Greenwood, Indiana, won’t be linked with Uvalde, Texas. Then see how willing law-abiding citizens are to give up their guns.