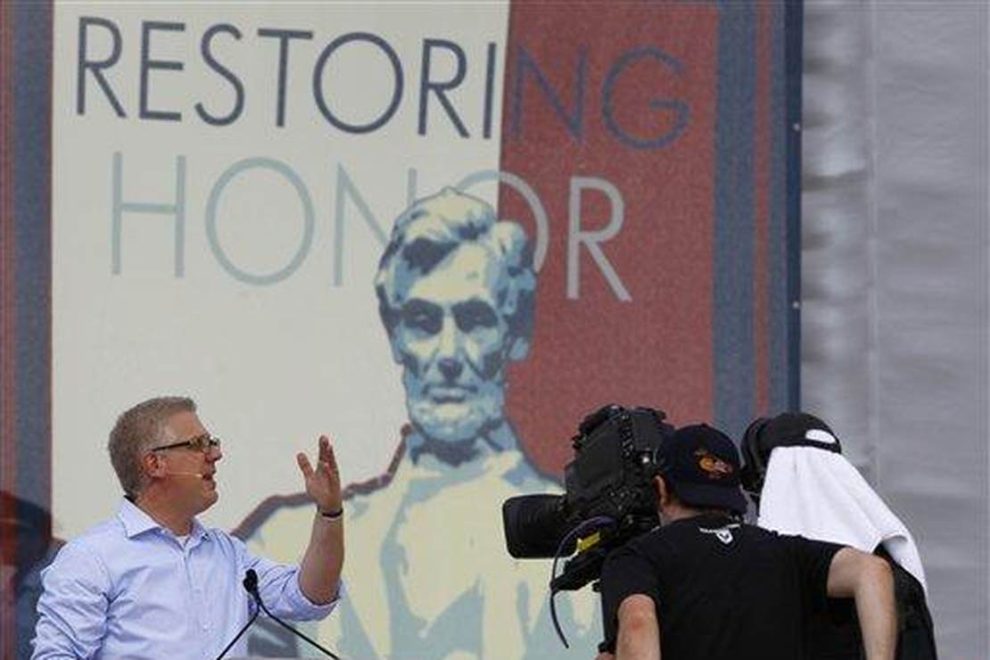 On his nationally syndicated radio show on September 15, Glenn Beck announced that he has withdrawn his support for an Article V Convention. This came as a rather large shock, as Beck, by his own admission, had advocated for such a convention to propose amendments to the constitution for over a decade. Beck was one of the first and most prominent supporters of the Convention of States Action organization, co-founded by Mark Meckler, a leader in the Tea Party movement. This week, however, Beck fretted that America may no longer be worthy of self-governance.

Several Soros-aligned opponents of an Article V Convention were quick to clip the segment and disseminate it on social media.

In the clip, Beck says:

“I have been a supporter of the Article V Convention of States. I have been a pretty big supporter, a vocal supporter. I am reversing that today because after some real thought and prayer, we are not the people to open up this sacred document. We are not the people. That was a God inspired document that was divinely written. You can read that from I don’t know how many founders. The very hand of God was involved. Benjamin Franklin even said that. The very hand of God was involved in writing that document. Do you believe that we could send that kind of delegate today? Someone who, when they got to an impasse, somebody like Ben Franklin would say, let’s pause and go to church and pray. They did not politic. They prayed. I am not for opening up that Constitution any more because we are not that people any more. When we are that people, I will be for it again. When we have demonstrated our humility and our obedience to God, and I am afraid it is going to take a massive beat down of our country to get to that place, then I will be for it again. Some day we will be humble enough, we will recognize God, some day we will not be an enemy to God, we will not be so arrogant. When we are those people, I will support the Convention of States. But I withdraw my support, and I am sorry to say that. It is because of the fact that this Constitution is wholly inadequate for anyone other than a religious and moral people. We are not those people and we should not stain this document.

When a prominent conservative thought leader, with an audience of millions, makes such a pronouncement, citizens should sit up and take notice. Glenn Beck is a religious man who, like millions of Americans, laments the erosion of morality among the population. He’s got a point — America seems in decline, and her people seem diffuse and disunited. Much of what has happened in the pandemic panic has cleaved more power to government and less to the people. The people have given up much of that power voluntarily in the panic over safety and public health. Meanwhile, many Americans turn a blind eye to — or worse, engage in active cheerleading for — abuses by the alphabet agencies that trample the rights of Americans suspected of involvement in J6, as if those people committed such heinous crimes as to simply forfeit their rights.

Beck is right in his assessment of current conditions, and it’s vital for supporters of an Article V Convention to understand why. We do not, on the whole, humble ourselves before God. And we have squandered what the Founders bequeathed us, the right to self governance, in the wide assumption that the bureaucracy knows best. The swamp has, in large part, won, or at least it has taken the upper hand in our society. Hope in maintaining the Union seems futile these days, and one wonders if we even deserve such a gift.

However, as respected a thought leader as Glenn Beck has been, he got a few technical details wrong in his announcement. More importantly, he forgot some important aspects of human nature as he let despair for the future of the republic — well-placed as it may be — take over his thinking. This came as a shock after his decade-plus support of the movement and the opportunities before us, but one can’t fault his despair when looking around at the current condition of the American Republic.

First, the technical aspects. Beck knows well that an Article V convention would not “open up” the Constitution, but he said this anyway: “I am not for opening up that Constitution any more because we are not that people any more.”

This statement was mystifying. The Convention of States organization, with the prominent assistance of Glenn Beck, has spent years debunking this very myth. Remember, this is what Article V of the U.S. Constitution says:

The Congress, whenever two thirds of both Houses shall deem it necessary, shall propose Amendments to this Constitution, or, on the Application of the Legislatures of two thirds of the several States, shall call a Convention for proposing Amendments, which, in either Case, shall be valid to all Intents and Purposes, as Part of this Constitution, when ratified by the Legislatures of three fourths of the several States, or by Conventions in three fourths thereof, as the one or the other Mode of Ratification may be proposed by the Congress; Provided that no Amendment which may be made prior to the Year One thousand eight hundred and eight shall in any Manner affect the first and fourth Clauses in the Ninth Section of the first Article; and that no State, without its Consent, shall be deprived of its equal Suffrage in the Senate. [emphasis added]

The entire point of the Convention of States movement is that the Framers of the Constitution, most notably George Mason, included TWO methods of amending the constitution, either by Congress or by the people. They did not allow for a constitutional convention that would “open up” the document for radical alteration. Beck seems to have forgotten the many, many safeguards against radical alteration in our foundational document. For a refresher, let’s review the list of safeguards compiled by public policy and constitutional expert Dean Clancy [edited for brevity]:

Safeguard 1: A convention has no power to ratify. It can only propose.

Safeguard 2: A convention can only be convened by Congress, after two-thirds of the state legislatures have validly called for a convention.

Safeguard 3: In their resolutions applying for a convention, state legislatures must state the purpose for which they seek it, and all of the applications must be on substantially the same subject.

Safeguard 4: A convention can only propose amendments on the subject or subjects for which it was convened. Originalist legal scholars agree proposals falling outside this scope are to be treated as nonexistent, legally speaking.

Safeguard 5: An amendment proposed in an Article V convention can only be ratified after being forwarded by Congress back to the states. States cannot act on ratification until receiving a proposed amendment from Congress.

Safeguard 6: The federal judiciary may forestall the ratification of a proposed amendment that falls outside the scope of the convention’s call.

Safeguard 7: The federal judiciary may force Congress to forward any validly proposed amendment to the state legislatures for ratification.

Safeguard 8: A proposed amendment cannot become part of the Constitution until three-fourths of the state legislatures have voted to ratify it.

So much for a ‘runaway’ convention.

Clancy wrote this list in 2013, a few years after Beck publicly endorsed the process. Glenn knows this. He knows the process does not “open up the document.” He let despair cloud his judgment.

Now, could a convention pose radical amendments? Possibly, but the bar for ratification remains so high, anything that emerges that doesn’t garner the support of a supermajority of states — 75%, or 38 states — would never become law. The application offered by Convention of States Action, which has so far passed in 19 states (34 are required to call a convention), limits the scope of the convention to the subjects of term limits, a balanced federal budget, and limitations on the scope of government. No runaway, indeed.

Much more important, however, is human nature. America is in the throes of convulsive societal upheaval, and it remains to be seen if and how the republic will survive. Today, even more than when this movement began a decade ago, American citizens cry out for real leadership. Even in the face of several overwhelming campaigns to foment panic among the people, they lament the rise of the experts and the elites who have only their own interests and avarices at heart, instead of the constitutional protections of innate individual liberty. While we have completely forgotten the concepts of humility and self-governance in our hedonistic and narcissistic society, we feel unfulfilled. A hole exists where those human traits once found shelter. Most Americans still just want to be left alone to worship, defend their families, make a living, and live their lives. Life, Liberty, and the Pursuit of Happiness. The Declaration of Independence captured the very essence of human nature, and articulated what we wanted as individuals in a society. None of that has changed. The Constitution then formed a government and gave us the how. None of that has changed, either. When a growing number of Americans stand up, get active, volunteer for a movement to reestablish self-governance to replace the bureaucratic state, that begins what Samuel Adams called, “the brushfires in people’s minds.”

That’s leadership. That’s what America lacks, and what can restore the spirit of her citizens. If enough Americans are reminded of the hole that exists in modern society formerly occupied by humility and self-governance, they’ll remember why they feel empty and how to solve that problem.

Glenn Beck, on September 15, gave voice to all the reasons for despair. Those reasons are many, and they are everywhere. In renouncing the Convention of States movement, he has in fact done it a favor. He has reminded America of the urgency of changing course. Hope still remains that we can maintain the republic bequeathed to us by the Framers of the Constitution.

When he has had time to reflect and pray, Beck will likely choose hope over despair. When that happens, the Convention of States project will welcome him back with open arms.