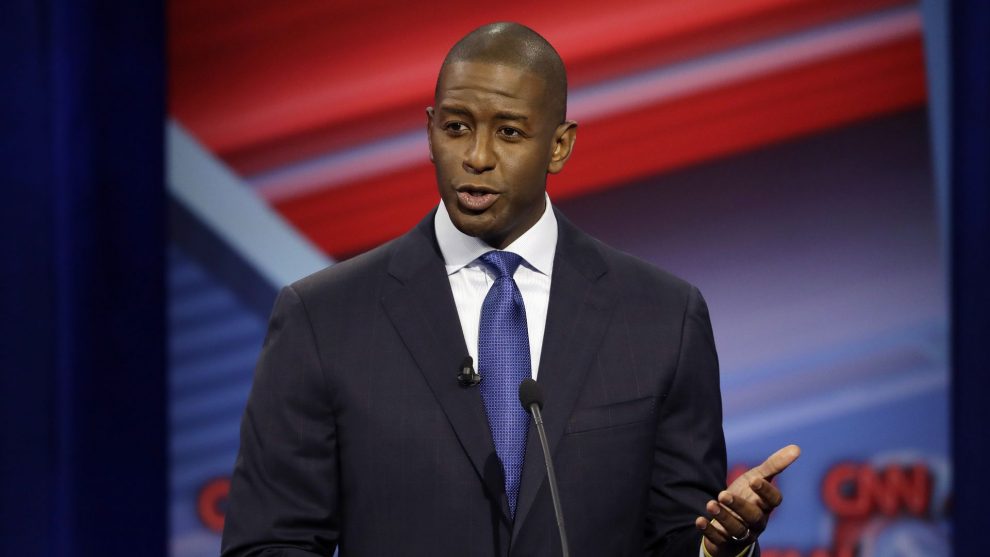 “We’re looking at a target of 1 million,” he said. “We’ve got over 3 million people eligible to vote, and that’s to say nothing of the 1.4 million returning citizens” — former felons in line to have their voting rights restored under a constitutional amendment approved by voters last year.

Gillum’s staff wouldn’t give specifics about the targeted number of new voters he hoped to register or the number of voters they hope to reengage after they decided not to vote in the past two general elections.

At the same time, the Florida Democratic Party said it will spend $2 million in the next year to register 200,000 voters ahead of the 2020 presidential primary.

There are currently 4.96 million registered Democrats in the state, compared to 4.7 million Republicans and nearly 3.6 million voters with no party affiliation.

Progressive activists who supported Gillum in last year’s gubernatorial race have speculated that he might mount a bid for president. In an interview with POLITICO before a speech today at the historically black Florida Memorial University in Miami Gardens, Gillum said it’s more important for him to grow the state’s voter rolls to help the Democratic nominee.

He noted a decline in the party’s voter edge since President Barack Obama’s first campaign.

“In 2008, Democrats had an advantage of almost 700,000 more Democrats than Republicans when Obama ran,” Gillum said. “In my last race, that advantage had shrunk to the 260,000 range. It was a very precipitous decline.”

Trump’s campaign is heavily focused on Florida, the biggest swing state in the nation, with 29 of the 270 electoral college votes needed to win. Without the Sunshine State, the president’s path to re-election narrows significantly.

If a Democrat can carry Florida in 2020, he or she could win the White House by capturing just one other swing state—Wisconsin, Michigan, Ohio, or Pennsylvania—if the remaining states vote the way they did in 2016.

Trump won Florida and some other swing states by razor-thin margins, raising hope among Democrats that their 2016 turnout woes can be remedied by growing voter rolls and persuading swing and first-time voters to cast ballots against the incumbent.

Joe Gruters, chairman of the Republican Party of Florida and a state senator, was dismissive of Gillum’s new campaign.

“Listen, I encourage everyone to go register to vote,” Gruters said. “My guess is we will get Republican votes out of his efforts as well. But I think this is more about him finding a job.”

Some Democrats have wondered if Florida is a lost cause. Gillum said it isn’t.

“Florida could be less competitive in the future, which is why you have so many Democrats talking about a pathway to the White House that doesn’t include Florida,” Gillum said. “That’s crazy talk.”

Steve Schale, a Florida political consultant who worked for Obama, agreed that Democrats need to do a better job of registering Florida voters. On his blog this week, he said that the voter registration advantage held by Democrats has fallen by 400,000 voters over the past decade.

Former New York City mayor and billionaire Michael Bloomberg announced earlier this month that rather than seek the presidency as a Democrat, he would fund a voter registration, persuasion and turnout effort in Florida, Wisconsin, Ohio, Michigan and Pennsylvania.

“Whoever the nominee is likely won’t be decided until late into 2020, and whoever that nominee is will face a very large and well-funded campaign-in-waiting,” Bloomberg adviser Mitch Stewart, who led Obama’s battleground effort in 2012, told POLITICO earlier this month.

“As we looked at the gaps in the current ecosystem, we said, ‘Could we set something up right now that could provide the infrastructure, provide the data and technology to whomever the eventually nominee is so they’re not at such a disadvantage once the primary is over?’” Stewart said. “We can.”

“I’m aware of the fact that not everyone who registers votes,” Gillum said. “But if you have more marbles on the table, when some of them fall off, it’s not as consequential.”