Former President Donald Trump is suggesting that Georgia residents sue the state for running “a corrupt and rigged 2020 presidential election.”

His comments came in a statement released Friday after Attorney General Merrick Garland announced that the Justice Department is filing a lawsuit against the state of Georgia to try and overturn a new voting law that Democrats allege discriminates against minorities.

The DOJ’s suit takes aim at Georgia’s Election Integrity Act, which was signed into law by Gov. Brian Kemp, R-Ga., in March after it was passed by the Republican-led state Legislature.

The action is the first major voting rights case the DOJ has filed under the Biden administration. Lawmakers on Capitol Hill had been briefed on the matter, The Washington Post reported.

The Post said Georgia’s law imposes new limits on the use of absentee ballots, makes it a crime for outside groups to provide food and water to voters waiting at polling stations, and hands greater control over election administration to the state Legislature.

“The complaint alleges that the state enacted those restrictions with the purpose of denying or abridging the right to vote on the basis of race of color,” Garland said.

Trump, in his statement said: “Biden’s Department of Justice just announced that they are suing the Great State of Georgia over its Election Integrity Act. Actually, it should be the other way around! The PEOPLE of Georgia should SUE the State, and their elected officials, for running a CORRUPT AND RIGGED 2020 PRESIDENTIAL ELECTION — and for trying to suppress the VOTE of the AMERICAN PEOPLE in Georgia. If we don’t address these issues from the 2020 Election head on, and we allow the Radical Left Democrats to continue to politicize the DOJ and Law Enforcement, we will lose our Country. SAVE AMERICA!” 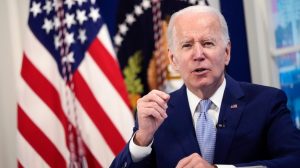 DHS Secretary Mayorkas Uses Border Visit to Tout Amnesty for Illegal Aliens
‘Titanic’ Blunder Leaves Biden in a Bad Spot, Might Be Forced to Give Massive Support to Trump