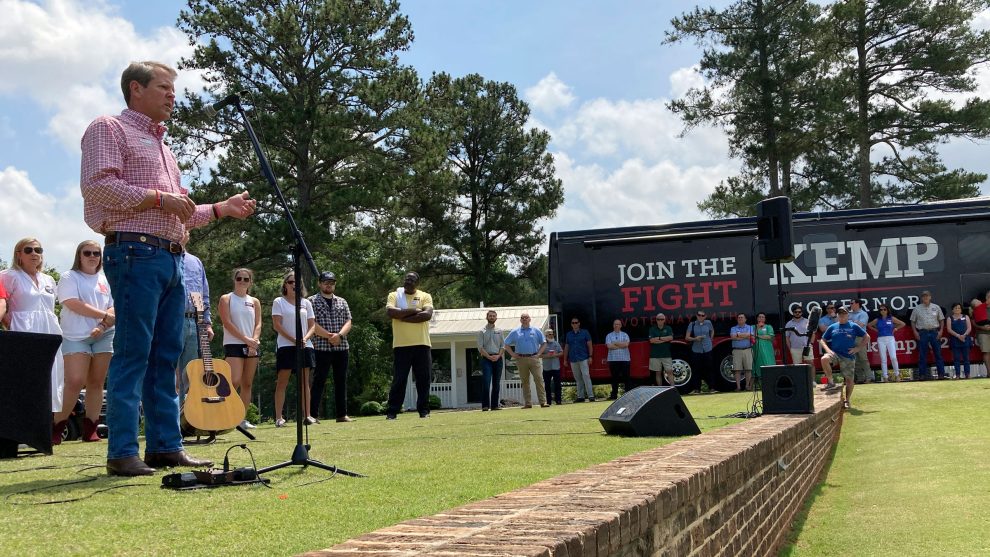 Stephen Lawson, the spokesperson for 34N22, a PAC supporting Walker and named for his jersey number, issued the following statement:

34N22 congratulates Herschel Walker on a dominant win in the Republican primary for U.S. Senate. Throughout this primary, Herschel traveled across the state, meeting with voters and sharing his background, experience, and record of results as a successful businessperson, job creator, and leader who can unite our state and deliver results in the U.S. Senate. Now, far-left incumbent Raphael Warnock will be forced to answer for his disastrous record of voting with Joe Biden over 95 percent of the time leading to skyrocketing inflation, record gas prices, a crisis at the border, and violent crime surging across Georgia. It’s the second half now–and the momentum is completely on Herschel’s side. Raphael Warnock will spend the next six months playing defense while Herschel runs right through him on the way to a big victory in November.

Gov. Brian Kemp made easy work of his opponents as well, and experts called his race by 8:30 p.m. local time. He’ll face his 2018 nemesis Stacey Abrams in a rematch of the last governor’s contest in Georgia. Abrams ran unopposed.

Tonight, voters proved that Governor Brian Kemp is a results-driven leader who has always put Georgia first. The contrast between Governor Kemp’s record of cutting taxes, empowering parents, supporting small businesses, and putting his faith in the people of Georgia stands in stark contrast with Stacey Abrams, who believes that only she knows what’s best. Her radical agenda would have kept kids out of the classrooms, small businesses shut down, and forced strict mandates on everyone but herself. Voters rejected her self-promoting antics and out-of-touch agenda four years ago and will do so again. As we were in the primary, the RGA is all-in and we will be there to ensure Governor Kemp is re-elected this Fall.

Embattled Secretary of State Brad Raffensperger is holding his own at the time this article was written, staying barely above the 50% threshold for avoiding a runoff. The way things look at this time, if he does fall below 50%, he’ll face Rep. Jody Hice (R-Ga.), who currently represents the state’s 10th district.

Other races involve endorsements by former president Donald Trump. In the primary for lieutenant governor, Burt Jones, whom Trump endorsed, is also staying just above 50% of the vote at this time. If he falters a bit, he’ll face Butch Miller in a runoff.

In Georgia’s 10th district, truck driver Mike Collins will most likely face Trump-endorsed Vernon Jones, a former Democrat, in a runoff. In the 14th district, the infamous Rep. Marjorie Taylor-Greene (R-Ga.), who carried Trump’s seal of approval, skated away with a primary win. Another Trump endorsement in the 6th district, Jake Evans, is likely to face Rich McCormick in a runoff.